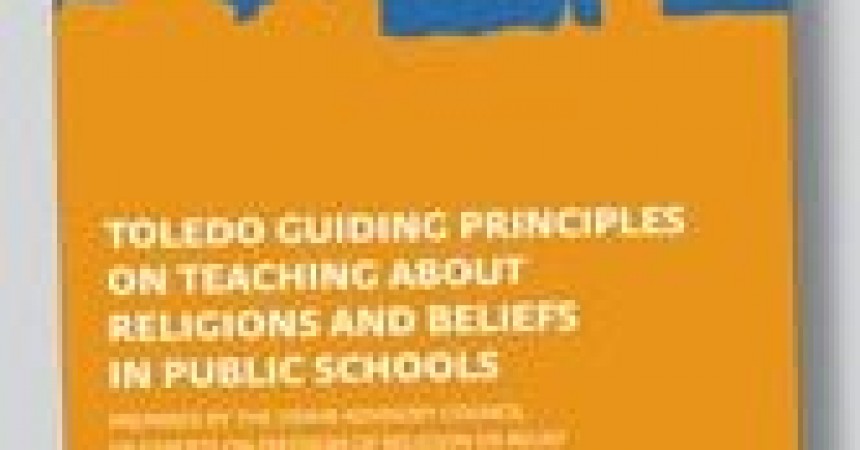 The Toledo Guiding Principles on teaching ABOUT religions and beliefs were issued by the Organisation for Security and Co-operation in Europe (OSCE) in 2007. http://www.osce.org/odihr/29154

The Toledo Guiding Principles are based on human rights and in particular the right to freedom of conscience.

One of the Recommendations in the Report from the Forum on Patronage and Pluralism is to introduce a subject under the curriculum called Education about Religions, Beliefs and Ethics (ERB). It is clear from the Recommendations of the Forum on Patronage and Pluralism that the proposed new course on Religions and Beliefs is not intended to replace Catholic Religious instruction in schools.

The Recommendation reads as follows:-

“The Advisory Group is of the view that all children have the right to receive education in ERB and Ethics and the State has the responsibility to ensure that this is provided. The Advisory Group requests that the NCCA, with assistance from the partners and mindful of existing programmes, should develop curriculum and teacher guidelines for ERB and Ethics, in line with the Toledo Principles, the RedCo, and the Cambridge Primary Review.”

The Report also states that:-

“In order to clarify the constitutional and legal rights of children and parents and to reflect changes to the Rules for National Schools, the Advisory Group recommends that the Minister for Education and Skills should make schools aware of the human rights requirements of national and international law.”

The Toledo Guiding Principles are also based on one of the general principles under Article II of Protocol 1 (the right to education) of  the European Convention which states that:-

“the State, in fulfilling the functions assumed by it in regard to education and teaching, must take care that information or knowledge included in the curriculum is conveyed in an objective, critical and pluralistic manner. The State is forbidden to pursue an aim of indoctrination that might be considered as not respecting parents’ religious and philosophical convictions. That is the limit that must not be exceeded.”

The reason they gave is as follows:-

“Furthermore, the Holy See has noted the upcoming presentation of the Toledo Guiding Principles on Teaching about Religions and Beliefs in Public Schools and is surprised. While recognizing that they were prepared by the Panel of Experts on Freedom of Religion, it is difficult to understand why participating States, especially the Holy See that speaks openly on matters of religion, were not consulted. The Document contains a reductive view of religion and a conception of the secular nature of States and their neutrality that obfuscates the positive role of religion, its specific nature and contribution to society. In doing so, the document contradicts what has always marked the OSCE’s understanding of religion. http://www.osce.org/pc/28557

The OSCE were not obliged to consult the Holy See. They had a panel of experts in place on the right to freedom of conscience and the rights of parents to respect for their religious and philosophical convictions. The Toledo Guiding Principles are clear on the rights of parents.  In order to ensure that the right to freedom of conscience is respected any Religious education course under the curriculum must be delivered in an objective, critical and pluralistic manner. If the course is not delivered in this manner parents have a right to opt out their children.

The problem is that the Catholic Church rejects the teaching about religions and beliefs in an objective manner and they issued a Circular letter on the subject which states that:-

What we have here is a clash between Human Rights law and Cannon Law. It will be interesting to see whether the State will implement this Recommendation from the Forum on Patronage and Pluralism in accordance with the Constitution and Human Rights law or with the educational aims of the agents of a foreign state.

Ruairi Quinn refuses to implement UN Recommendations on the rights of the child.