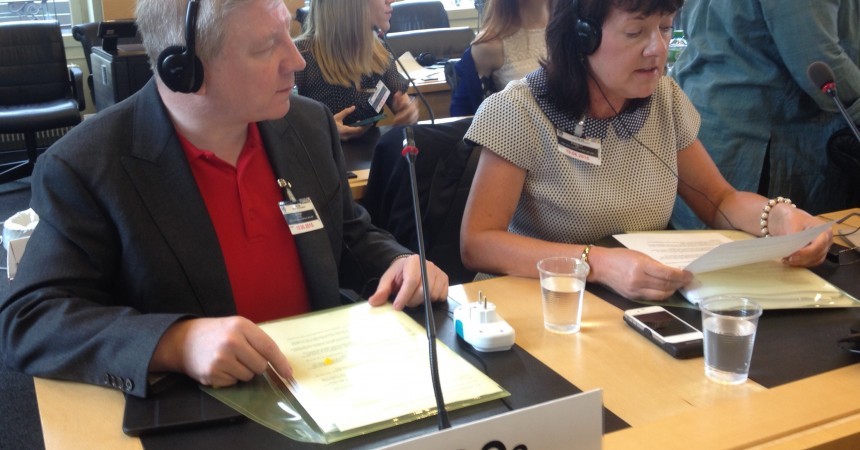 Atheist Ireland has just made the following statement to the United Nations Committee on Economic, Social and Cultural Rights in Geneva, Switzerland. We will next be attending a more detailed briefing session with UN Committee members, then the Committee will be questioning Ireland about its human rights record. The Twitter hashtag for the sessions is #UNIRL

Ireland repeatedly ignores UN recommendations to respect the rights of atheists and non-Christians, in the treaties on Civil and Political Rights, Rights of the Child, Racial Discrimination and ESC Rights.

This Covenant obliges Ireland to guarantee the rights within it without discrimination. Ireland repeatedly fails to do this, particularly in the education system.

Ireland still has no non-denominational schools, at primary or secondary level. Primary schools are still publicly funded private bodies, almost all Christian, with a near-monopoly on a vital public service, and no effective remedy to vindicate Covenant rights.

These State-funded private schools can still demand Christian baptism certs for admission. The new Admission to Schools Bill retains the right to discriminate against atheist, Muslim and other minority faith families.

If you do get your child into a school, you still face two problems. If you want to opt your child out of formal religious instruction classes, there are no non-discriminatory exemptions or alternatives.

And the Education Act and Rule 68 of National Schools integrate a religious ethos throughout the entire curriculum, thus depriving your child of a neutral studying environment, even outside of the formal religious instruction classes.

The education system is not an isolated case. Ireland systemically breaches the Covenant rights of atheists and non-Christians, in the Education Act, Admissions to Schools Bill, Equal Status Act, Employment Equality Act, Civil Registration Act, religious oaths for political and legal jobs, our blasphemy law, our abortion law, and the lack of an effective remedy.

Ireland has no plans to adopt comprehensive anti-discrimination laws to include all the grounds referred to in article 2, paragraph 2, of this Covenant.

Ireland has told this Committee that our equality laws protect the rights in the Covenant. But our Minister for Education, and our Minister of State for Equality, have both recently said that a Constitutional Referendum would be needed to remove discrimination against atheists in our education system.

Even though Ireland accepted, here in Geneva, last year, that majority votes cannot be used to derogate from Covenant rights, including on abortion law, Ireland continues to rely on majority votes to defend breaches of these rights.

These problems are outlined in detail in Atheist Ireland’s written submissions to this Committee.