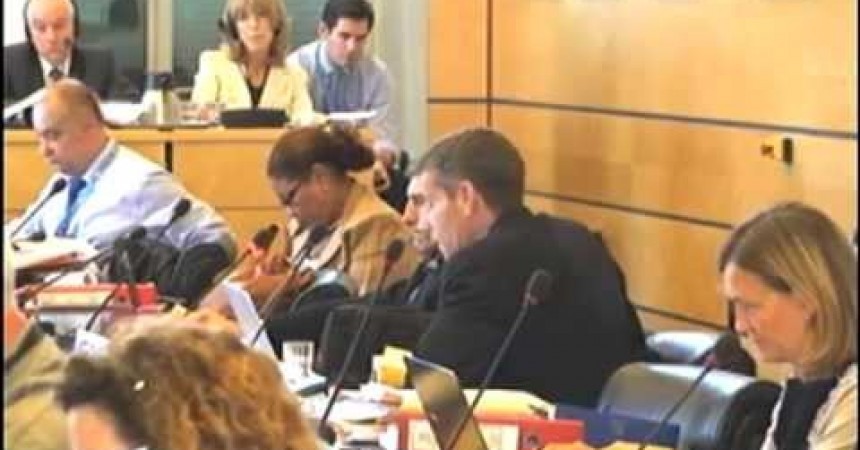 Here is video of the UN in 2014 asking the delegation from Ireland about human rights violations in the education system.

And here is the transcript of those questions.

In 1995 the Report of the Constitutional Review Group Report raised these issues under Article 44.2.4 of the Irish Constitution. This Article sanctions state funding of denominational schools. Article 44.2.4 was also meant to protect the rights of minorities. However, over the years, those rights have been undermined.

The Review Group does not favour the amendment of this part of Article 44.2.4° for the following reasons:

i) Article 44.2.4° may be thought to represent something of an exception to the general rule contained in Article 44.2.3° that the State shall not endow any religion. Accordingly, if a school under the control of a religious denomination accepts State funding, it must be prepared to accept that this aid is not given unconditionally. Requirements that the school must be prepared in principle to accept pupils from denominations other than its own and to have separate secular and religious instruction are not unreasonable or unfair.

ii) if Article 44.2.4° did not provide these safeguards, the State might well be in breach of its international obligations, inasmuch as it might mean that a significant number of children of minority religions (or those with no religion) might be coerced by force of circumstances to attend a school which did not cater for their particular religious views or their conscientious objections. If this were to occur, it would also mean that the State would be in breach of its obligations under Article 42.3.1°

Article 42.3.1 of the Constitution states that:

The State shall not oblige parents in violation of their conscience and lawful preference to send their children to schools established by the State, or to any particular type of school designated by the State.

The eight UN and Council of Europe Recommendations

Here is a list of the eight United Nations and Council of Europe Recommendations in relation to education. It is clear that there are many human rights violations in the  Irish education system.

30. The Committee is concerned at the discrimination faced by children with disabilities, migrant children, children belonging to a religious minority, Traveller and Roma children, including:

(a) Legal provisions, such as Section 7 of the Equal Status Acts 2000, which allow schools to give preference to admission of students based on religion;

(b) Discriminatory criteria against children with special educational needs contained in many admissions policies and the lack of a regulatory framework; and

(c) Adverse effects of the austerity measures on the education sector, including the reduced number of teachers, rationalization of teacher/student support services, abolition of grants to schools, increase in transport charges and reduced allowance for clothing and footwear, which further restrict disadvantaged children from attending schools (arts. 13 and14).
The Committee recommends that the State party:

(a) Take all necessary measures to bring all relevant laws, including the Equal Status Acts 2001 and the Education (Admission to Schools) Bill 2015 in line with the international human rights standards and to increase the number of non-denominational schools at the primary and post-primary education levels;

The Committee is concerned at the slow pace of progress in amending the provisions of the Constitution that oblige individuals wishing to take up senior public office positions, such as President, members of the Council of State and members of the judiciary, to take religious oaths. It is also concerned about the slow progress in increasing access to secular education through the establishment of non-denominational schools, divestment of the patronage of schools and the phasing out of integrated religious curricula in schools accommodating minority faith or non-faith children. It expresses further concern that under section 37 (1) of the Employment Equality Acts, religious-owned institutions, including in the fields of education and health, can discriminate against employees or prospective employees to protect the religious ethos of the institution (arts. 2, 18, 25 and 27).

The State party should take concrete steps to amend articles 12, 31 and 34 of the Constitution that require religious oaths to take up senior public office positions, taking into account the Committee’s general comment No. 22 (1993) on freedom of thought, conscience and religion, concerning the right not to be compelled to reveal one’s thoughts or adherence to a religion or belief in public. It should also introduce legislation to prohibit discrimination in access to schools on the grounds of religion, belief or other status, and ensure that there are diverse school types and curriculum options available throughout the State party to meet the needs of minority faith or non-faith children. It should further amend section 37 (1) of the Employment Equality Act in a way that bars all forms of discrimination in employment in the fields of education and health.

3. European Commission Against Racism and Intolerance, 2013

4. UN Committee on the Elimination of Racial Discrimination, 2011

Seventy-eighth session – 14 February – 11 March 2011 Consideration of reports submitted by States parties under article 9 of the convention.

Concluding observations of the Committee

26. The Committee recalls its previous concluding observations (CERD/C/IRL/CO/2) and notes with concern that the education system in the State party is still largely denominational and is mainly dominated by the Catholic Church. The Committee further notes that non-denominational or multi-denominational schools represent only a small percentage of the total and, regrets that, according to reports, there are not enough alternative schools, and students of the Catholic faith are favoured for enrolment into Catholic schools against students of other faiths in case of shortage of places. The Committee further expresses its regret that the provisions of the Equal Status Act give the power to schools to refuse to admit students to denominational schools on grounds of religion if it is deemed necessary to protect the ethos of the school (articles 2, 5(d)(vii) and 5(e)(v))

Recognising the ‘intersectionality’ between racial and religious discrimination, the Committee reiterates its previous concluding observations (CERD/C/IRL/CO/2) and recommends that the State party accelerates its efforts to establish alternative non-denominational or multi-denominational schools and to amend the existing legislation that inhibits students from enrolling into a school because of their faith or belief. The Committee further recommends to the State party to encourage diversity and tolerance of other faiths and beliefs in the education system by monitoring incidents of discrimination on the basis of belief.

22.The Committee notes with concern that the vast majority of Ireland’s primary schools are privately run denominational schools that have adopted a religious integrated curriculum thus depriving many parents and children who so wish to have access to secular primary education. (arts. 2, 18, 24, 26).”

The State party should increase its efforts to ensure that non-denominational primary education is widely available in all regions of the State party, in view of the increasingly diverse and multi-ethnic composition of the population of the State party.
(Article 2 Freedom from Discrimination, Article 18 Freedom of Conscience, Article 24 The Right of the Child, Article 26 Equality before the Law.)

6. Council of Europe Framework Convention on the Protection of National Minoritie, 2006

Present situation
98. The Advisory Committee has received detailed information from non-governmental sources on the way in which the limited number of non-denominational or multi-denominational schools in Ireland – where an overwhelming majority of schools are run by Catholic bodies – can complicate efforts to find a school that would adequately take into account the cultural or religious background of non-Catholic minority children. The Advisory Committee welcomes the fact that the Irish authorities are paying increasing attention to the issue and that there is a commitment to step up support for expanding the network of non-denominational or multi-denominational schools. This has already resulted in the establishment of a number of new multi-denominational primary schools in recent years, although progress in this respect still appears to lag behind growing demand.

99. The Advisory Committee stresses that, in addition to widening the non-denominational and multi-denominational school network, there is a legal obligation to ensure that, in denominational schools, there is a possibility to opt out of religious instruction. It is important that this possibility is offered and organised in a manner that does not unduly single out the pupils concerned. The Advisory Committee further recalls that the above issues are likely to only increase in importance as the religious and cultural diversity of the country expands further.

100. The Advisory Committee urges the authorities to pursue their commitment to widen schooling options, including in terms of non-denominational and multi-denominational schools, in a manner that ensures that the school system reflects the growing cultural and religious diversity of the country.

60.The Committee reiterates the concern raised by the Committee on the Elimination of Racial Discrimination in its concluding observations on the initial and second periodic reports of the State party (CERD/C/IRL/CO/2) that non-denominational or multidenominational schools represent less than 1 % of the total number of primary education facilities.

8. UN Committee on the Elimination of all Forms of Racial Discrimination, 2005

“18. The Committee, noting that almost all primary schools are run by Catholic groups and that non-denominational or multi-denominational schools represent less than 1% of the total number of primary educational facilities, is concerned that existing laws and practice would favour Catholic pupils in the admission to Catholic schools in case of shortage of places, particularly in the light of the limited alternatives available. (article 5(d)(vii) and 5(e)(v))

The Committee, recognising the “intersectionality” of racial and religiousdiscrimination, encourages the State party to promote the establishment of nondenominational or multi-denominational schools and to amend the existing legislative framework so that no discrimination may take place as far as the admission of pupils (of all religions) in schools is concerned.”