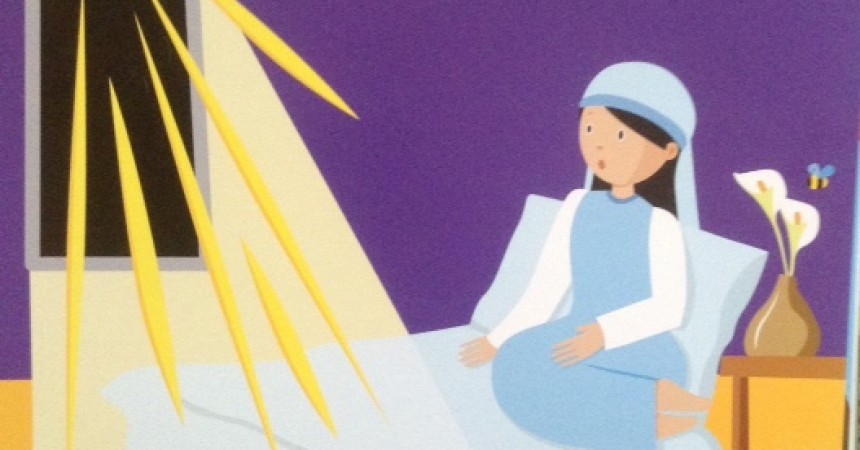 As part of the Catholic religion course ‘Grow in Love’, six year old infants in Irish schools are being taught that ‘Mary says YES’! to God ‘working through her’ by making her pregnant, despite Mary being afraid, confused and not understanding what was going on.

Mary looks like a little girl in the picture that is to be displayed in all classrooms. When Mary says ‘YES’!, she is sitting on her bed looking startled, it is nighttime, and there is a little kitten with a heart on it beside her on the floor.

This is an extraordinary and dangerous message to give to young children. ‘SAY YES’!, even if you are afraid and confused. Just trust someone that comes to your bed in the night.

Of all organisations, the Catholic Church should know that we have higher standards of child protection today than were common when this myth was first invented two thousand years ago, at a time when Jewish girls were typically betrothed for marriage at about twelve years of age.

The ‘Grow in Love’ religion course is based on the Catholic Preschool and Primary Religious Education Curriculum. The Catholic Church sought and received approval from the Holy See for its use in publicly funded Irish National Schools. This approval is called a “Decree of Recognitio“.

The Religion book for Senior Infants describes this section as;

“The Angel Gabriel comes to Mary”

Young children are expected to complete a maze to help Gabriel to find his way to Mary, who is portrayed as a child in her bed at night, and then the children have to trace out the word ‘YES’. The Teachers’s manual describes how to explain this section to young children. Teachers are to explain to small girls that Mary’s ‘YES’! made it all possible, even though she did not understand, was afraid and confused.

She just ‘trusted’ and said ‘YES’! Teachers are also expected to tell children that Mary’s ‘YES’, meant that God would ‘work through her’ and she would become pregnant with Jesus.

The text describes Mary as a young woman, despite portraying her as a little girl without adult characteristics, but the message of saying ‘Yes!’ while being afraid and confused is dangerous regardless of the age of the character. If parents decide to opt out their children from the religion class they are responsible for their supervision. Our children are still left sitting at the back of the class absorbing the Catholic Church message: ‘SAY YES’!, even if you are afraid and confused. Just trust someone that comes in the night.

"We'll let your child in if we have space available": Well thanks, we are so grateful!

Government must amend the Equality Acts to protect nonreligious beliefs