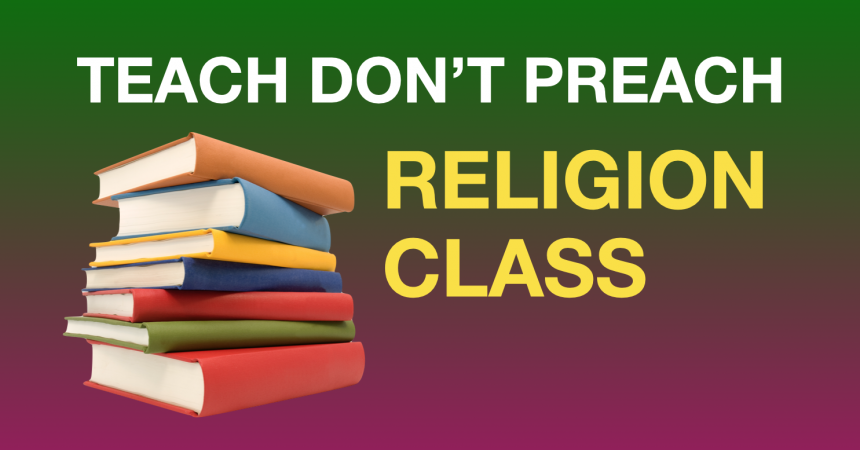 The Catholic Church is opposed to the Recommendation from the Forum on Patronage and Pluralism on Education About Religions, Beliefs and Ethics (ERB and ethics). Given the legal framework in Ireland, there really is little hope that this Recommendation will ever be realised.

The Recommendation from the Forum on Patronage and Pluralism regarding ERB and ethics reads:-

“The Advisory Group is of the view that all children have the right to receive education in ERB and Ethics and the State has the responsibility to ensure that this is provided. The Advisory Group requests that the NCCA, with assistance from the partners and mindful of existing programmes, should develop curriculum and teacher guidelines for ERB and Ethics, in line with the Toledo Principles, the RedCo, and the Cambridge Primary Review. “

“The Advisory Group has a particular concern for those children who do not participate in religious programmes in denominational schools. They may go through their primary schooling without any ERB and ethical education. For these children, the proposed programmes in ERB and Ethics are of central importance. “

Out of the 56 States in the OSCE, the Holy See is the only one that has rejected the Toledo Guiding Principles. Their reason for rejecting these human rights based guidelines was:-

“The Document contains a reductive view of religion and a conception of the secular nature of States and their neutrality that obfuscates the positive role of religion, its specific nature and contribution to society.”

The Archbishop of Dublin, Diarmuid Martin has already criticised education about Religions, beliefs and ethics envisaged by the Recommendation from the Forum. He is quoted in an Irish Times Article as stating that:-

““He said “one does not have to be a believer to engage in interreligious dialogue or in reflection on religion as a social phenomenon”. In apparent reference to plans for classes on religion and ethics in primary schools, he continued: “But a study of religion which is entirely limited to the history and the sociology of religion may well be blinkered in its ability to understand the nature of faith and its relevance in the personal life of individuals and it relevance to public life.” “

The Catholic Church in Ireland want Catholic religious instruction in publicly funded National schools. They also want any education about ERB and Ethics to be delivered through the lens of the Catholic Church.

Rev Prof Eamon Conway, head of theology and religious studies at Mary Immaculate College of Education in Limerick, described the proposed new course about Religions, beliefs and ethics as:-

“an inherently secularist approach to the study of faiths” which seeks “to banish specific expressions of religious conviction”.

The Archbishop of Dublin, Diarmuid Martin might not have used those words but he is in agreement with the sentiment expressed in that statement. That sentiment is part and parcel of the educational philosophy of the Catholic church.

In their Response to the Report from the Forum on Patronage and Pluralism the Council for Education of the Irish Episcopal Conference set out their position. In fairness they are quite clear on this, they stated that:-

“Religious Education
The report speaks of religious education, religious instruction, faith formation, “education about religions and belief systems” and ethics. No definition of these terms is given so it is unclear what philosophy of education underpins their use in the document. Care needs to be taken that the report uses such terms in a manner that parents would recognise. We believe that parents who are committed to a religious world-view expect that Religious Education should introduce their child to that same world-view. It became clear at the forum sessions in June that all Patrons want to provide some form of programme with regard to religion and ethics. Such a programme could take a phenomenological approach as happens in many secular schools across Europe where children are introduced to religions as one datum among many others. The phenomenological approach is useful but it is very limited from a faith-based perspective. It amounts to education about religions and beliefs rather than education into and from religious faith.”

The Recommendation from the Forum cannot be achieved, because the legal framework is not in place to ensure that this proposed course is delivered in accordance with the Toledo Guiding Principles.

Government must amend the Equality Acts to protect nonreligious beliefs