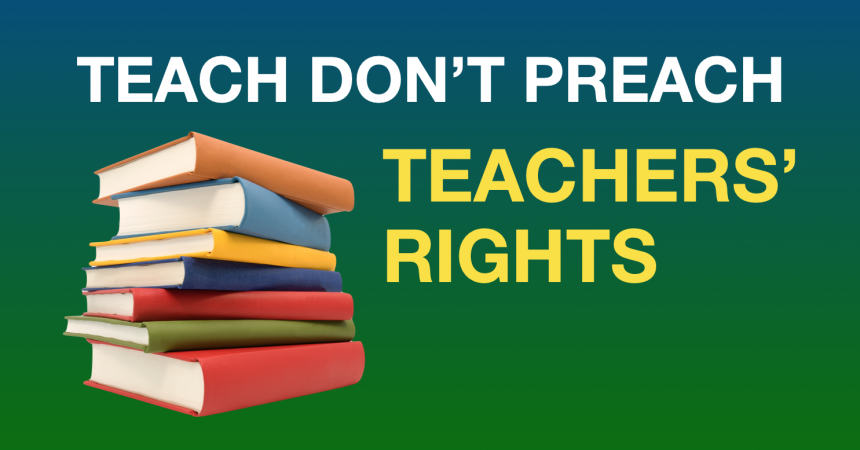 The Government is today bringing to the Dail a Bill to protect Catholic LGBT teachers from discrimination. While that part of the Bill is obviously a good thing, the Bill also reinforces the right of state-funded schools to discriminate against atheist and minority faith teachers.

The Equality (Miscellaneous Provisions) Bill has already been passed in the Seanad, and it is now being introduced in the Dail. Today it will be sent to a Dail Committee, where there will be opportunities to make further amendments.

Please contact your local TD today and ask them to welcome the protection being given to Catholic LGBT teachers, but to insist that the same protection be given to teachers who are atheists of members of minority faiths.

Defending teachers from religious discrimination is one of the four pillars of the Atheist Ireland Schools Equality PACT, which is an acronym for reforming Patronage, Access, Curriculum and Teaching in Irish schools.

Fine Gael and the Labour Party are now selectively recasting it as a pledge to protect teachers on the basis of their sexual orientation or family status, without any indication that this is a different commitment to the one in the Programme for Government.

Atheist Ireland is asking both Labour and Fine Gael to reconsider this change, and to amend the current Bill to remove all religious discrimination in employment in our schools and hospitals.

We are also bringing this issue to the attention of the European Union, as the Government is arguing that the EU sanctions this discrimination. We believe this is based on an inaccurate interpretation by the Government of the EU Employment Equality Directive of 2000. This protects employees from discrimination, and it takes precedence over national laws.

The Irish Government negotiated an exemption in this Directive, which allowed States to maintain national laws that were in force at the time, but the interpretation of this exemption has been disputed from the day that it was agreed.

In 2008 the EU took a case against Ireland about this, then dropped it in the political atmosphere in the run-up to the Lisbon Treaty referendum, where some people were hyping up fears about “Europe telling us what to do.”