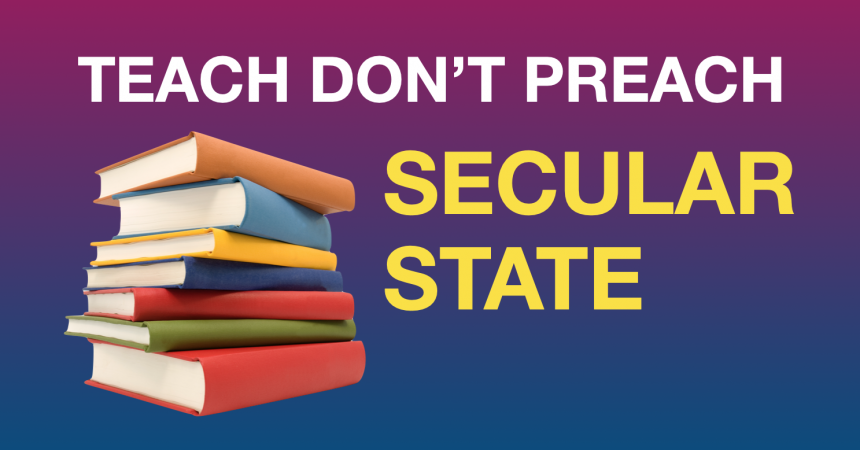 The Claire Byrne show last night on RTE discussed religious discrimination in access to schools. On one side we had Paddy Monahan arguing for the removal of religious discrimination in access (Section 7-3(c) of the Equal Status Act). On the other side we had David Quinn of the Iona Institute arguing that the issue is one of ‘over subscription’, and that all we need are more school places. The “we’ll let your child in if we have space available” brigade were out in force in the audience.

There are people in this country that don’t accept or understand that access to education without religious discrimination is a Constitutional and human right. Why on earth would we accept a situation whereby our children are ‘let in’, to their local National school, if there are spaces available? If pressure is put on places it is a Catholic first policy, and the children from minorities go to the bottom of the list. In the case of Protestant schools, it’s the children of Protestants first, and then the “we’ll let you in if we have space” admissions policy kicks in.

Crumbs from the table

We really are so grateful to these publicly funded National schools. Our children gain access to their local publicly funded National school because they have spaces available! What a welcome, come on in here, we have spaces and we’ll evangelise your child while we are at it. Unfortunately if there is pressure on places, we will give preference to our co-religionists, and your child must go down to the bottom of the list. Don’t be concerned about it though as it is just ‘over subscription’, not religious discrimination.

Well, it’s like this you see (so sorry for bringing it up), but we are looking for our rights. We are campaigning for the rights of our children. These rights are based on human dignity. We will not accept the crumbs from the table that we are already paying for, and will challenge religious discrimination which seeks to undermine our human dignity and the dignity of our children. It is a matter of conscience for us.

In Ireland the vast majority of publicly funded National schools are under religious patronage, mainly the Catholic Church. The state ‘provide for’ (Article 42.4 Irish Constitution) the education of children from minority families in these schools, and we are legally obliged to send our children to school. The state is also obliged under the Constitution to respect (Article 42.1) the inalienable rights of all parents. Now to be clear on this, that Article in the Constitutions refers to ALL parents. It doesn’t single out Catholic parents or the majority in a particular area.

These are publicly funded National schools

When people refer to Catholic schools, denominational schools, faith based schools, private Catholic schools, faith schools etc, they are speaking about publicly funded National schools. Article 44.2.4 is the constitutional framework under which these schools are recognised and funded. The signed Leases for these schools all refer to them as National schools. The Lease also states that they are open to all children in the community and that there will combined literary and moral, and Separate Religious Instruction.

Now for some reason those constitutional conditions, and the Lease (still in place), have been interpreted to mean that certain five year old children in a community can be put at the bottom of the schools Admissions list, when accessing their local publicly funded National school. If they do gain admission to the school, then they are evangelised into the Catholic faith. We are asked to accept that this type of behaviour is inclusive, welcoming, diversity and pluralism.

The state has told us that the Constitution requires them to discriminate in this manner in order to buttress religion, based on an unpublished legal opinion. That analysis has put Bishops of the Catholic Church (who are also agents of a foreign state) in a controlling position over the education system in this Republic. It gives them privilege, which they use to support their mission to evangelise.

This unpublished legal opinion means that the Constitutional conditions attached to the state funding of publicly funded National schools are being ignored (Article 44.2.4). It also means that other Constitutional obligations such as the right of all parents to respect for their conviction (Article 42.1), the right (Article 42.3.1), not to be obliged to send your child to a school against your conscience, are simply disregarded.

You can now appreciate where the “we’ll let you in if we have spaces available” brigade are coming from. Their privilege is such that they simply do not see anything wrong with giving preference to co-religionists if there is over subscription. They don’t understand that our children have a RIGHT to access their local publicly funded National school.

The “we’ll let you in if we have spaces available” Admissions policy is simply outrageous; it treats us as second class. Our children are not category two children and we simply will not accept that.

In order to buttress religion the state has put in place certain pieces of legislation. This legislation enables schools with a religious ethos (vast majority Catholic), to give preference to co religionists and to refuse access to a five year old if they can prove that the five year old will undermine their ethos.

In this Republic we have gone from the above Constitutional conditions to state funding of publicly funded National schools to a situation whereby;

(a) The Catholic Church has control over the vast majority of schools. Five year olds are refused access if their parents can’t produce a Baptismal Certificate.

(b) No practical application is given to the right to opt out of religion. When accessing the right to education in your only local publicly funded National school, your children cannot opt out of religion classes without discrimination. Children are evangelised into the Catholic faith throughout the school day with the help of Rule 68 and the Primary School Curriculum.

The Constitutional Review Group Report in 1995 recognised this situation when they stated that:-

“Taken together, the Rules [for National Schools 1965] and the provisions of the 1971 curriculum created a new situation. The State now formally recognised the denominational character of the national school system …. It had removed the requirement for teachers to be sensitive to the religious beliefs of ‘those of different religious persuasions’. According to the curriculum guidelines, all schools were expected to offer an integrated curriculum where religious and secular instruction would be integrated.
While the rule under which parents were allowed to opt their children out of religious instruction still remained, the rule became effectively inoperable since religious and secular instruction would now be integrated.”

Here are two of the pieces of legislation that have turned publicly funded National schools into places where our Constitutional and human rights are completely disregarded.

Section 15 – 2 (b) of the Education Act 1998 obliges all schools to uphold the ‘Characteristic Spirit’ of the Patron.

“uphold, and be accountable to the patron for so upholding, the characteristic spirit of the school as determined by the cultural, educational, moral, religious, social, linguistic and spiritual values and traditions which inform and are characteristic of the objectives and conduct of the school, and at all times act in accordance with any Act of the Oireachtas or instrument made thereunder, deed, charter, articles of management or other such instrument relating to the establishment or operation of the school.

(c) – 2 consult with and keep the patron informed of decisions and proposals of the board.

Section 7 -3(c) of the Equal Status Act says that the following is not religious discrimination:

“Where the establishment is a school providing primary or post-primary education to students and the objective of the school is to provide education in an environment which promotes certain religious values, it admits person of a particular religious denomination preference to others or it refuses to admit as a student a person who is not of that denomination and, in the case of a refusal, it is proved that the refusal is essential to maintain the ethos of the school.”

We have a situation whereby the Constitution and the Lease for National schools say one thing, and the schools are operating under another set of made up rules that are contrary to the Constitution, human rights law and their Leases.

We cannot but agree with the Constitutional Review Group Report in 1995 when it stated that:-

We do not accept that in a Republic minorities can be treated in this manner and we will not accept “we will let you in if we have space” Admission policies where our children are treated as second class.