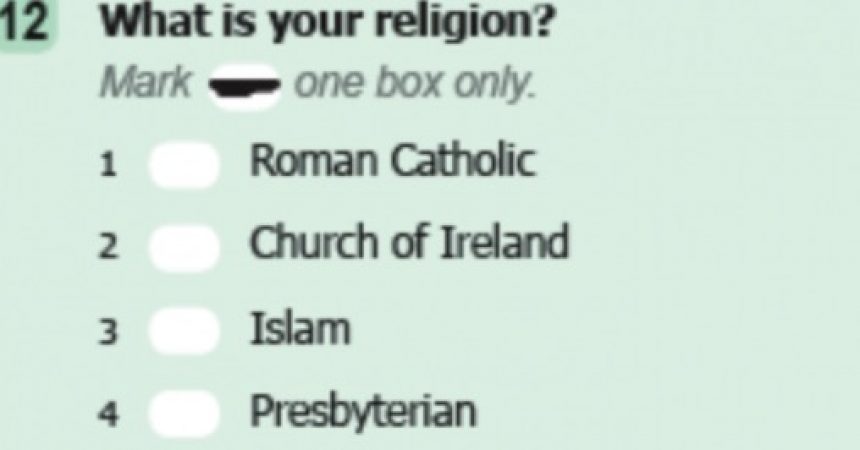 Some people have suggested that those who ticked the ‘no religion’ box in the census may be spiritual, and therefore in some way more religious than atheist. There was no specific box in the recent census to tick if you see yourself as spiritual and also religious. You had the option of ticking the various religion boxes, such as Roman Catholic, Church of Ireland, Islam etc.

If you were not comfortable in that category, you could always tick the ‘other, write in your religion’ box, if you felt that you were both spiritual and religious. In the last census some people put ‘atheist’ in this section, even though it specifically asks about religion. Many atheists would not refer to themselves as spiritual but there are atheists that do.

The word spiritual can be described as an intense psychological and emotional feeling. This does not mean that atheists, who might see themselves as spiritual, also believe in a higher power.

There are those who see the word ‘spiritual’ as related only to religion. They claim that those who have ticked the ‘no religion’ box in the recent census, and do not refer to themselves as atheist, may be ‘spiritual’ and by default more ‘religious’ than atheist. There are no grounds for claiming this. It may be that some people, who are anxious that there may be a significant increase in the ‘non religious,’ have decided that this category is in fact ‘spiritual’ and equates more to ‘religious’ than atheist.

The word ‘spiritual’ is in the Education Act 1998. Section 9 – (d) of the Act obliges schools to promote the moral, spiritual, social and personal development of students. It does not say that schools should promote the religious education of all students, it uses the word spiritual. In fact the Department of Education has made clear that it does not equate the word ‘spiritual’ with religion.

The Department of Education is on record as stating that:-

“It should be noted that at the meeting the Dept did not equate “spiritual” with “religious”.” (This comes from the minutes of a meeting that Atheist Ireland got under FOI.)

“The State shall, however, as guardian of the common good, require in view of actual conditions that the children receive a certain minimum education, moral, intellectual and social.”

Trying to equate the word spiritual with religious, and then claiming that people who ticked the ‘no religion’ box in the census are spiritual, is simply a nonsense.

Yet again, the State ignores the Constitutional right to not attend religious instruction