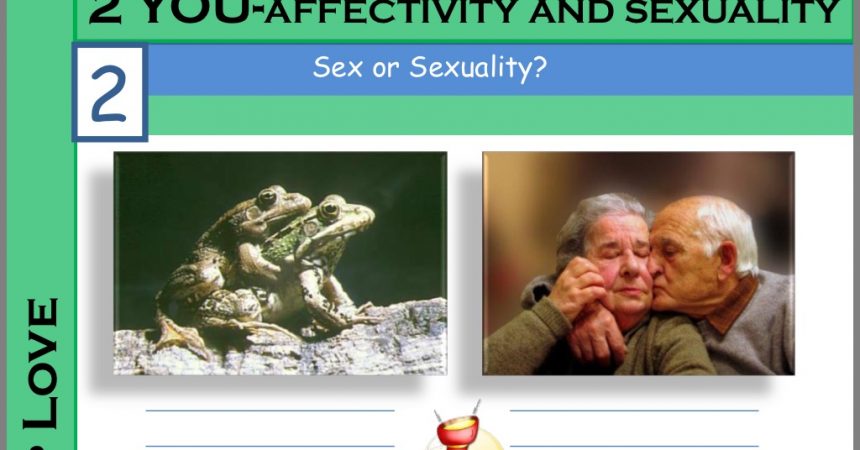 The Vatican has published a new online course for the sex education of adolescents called the Meeting Point.  It was developed with the help of the Subcommittee of the Family and the Defense of Life of the Spanish Episcopal Conference.

The intention is that this new course on Vatican sex education will be introduced into all second level Irish schools. This has consequences for minorities in the education system as their Relationship, Sexuality and Moral education will be taught and controlled by the agents of a foreign state and contrary to their convictions.

In Ireland the State sets the operating rules for schools, but the ethos espoused by the trustees/patrons can inform aspects of how those operating rules are acted upon in schools. Nearly all second level schools, including the ETBs, have a religious ethos (mainly Catholic). The Archbishop of Dublin once referred to ETB Community Schools and ETB Designated Community Colleges as “our schools”. Dermot Martin Religious Education Letter March 2008

Integrating Course as part of Ethos

Nearly all second level schools in Ireland have Catholic religious instruction and worship. This includes ETB schools and colleges. All schools (including ETBs) combine the Guidelines for the Faith Formation and Development of Catholic students with the State Religious Education course and make it compulsory.

Schools with a Catholic Patron, as well as ETB Community Schools and Designated Community Colleges, all have a religious ethos. They will be able to integrate this Vatican course on sex education into compulsory religion classes, as this is part of their ethos.

At the Forum on Patronage and Pluralism the Irish Episcopal Conference stated about this second level RE Course that:

“does give leeway for, definitely open to the concept in its interpretation by way of how a particular school can deliver the programme to the faith formation approach to religious education, which fundamentally would have to be the case from a catholic perspective…(55.20)”

They can also integrate this  new course on Vatican sex education into Social, Personal and Health Education, as all School Policies must be based on the ethos of the Patron. Policies on Relationship and sexuality education in schools with a Catholic ethos (the vast majority) all reflect the teachings of the Church as outlined in this new Vatican sex education course.

In a recent Document on Advancing School Autonomy, the Dept of Education & Skills outlined the issue over ethos. They were clear that central government has no power over ethos. This means that the ethos of the Patron (not the school Board) informs the various subjects under the state curriculum. This has a significant impact on subjects such as the State Religious Education Course or Social, Personal and Health Education. These subjects are delivered through the lens of the Catholic Church.

Teachers are trained in places such as the Mater Dei Institute (a college of DCU). Even ETB non designated Community Colleges are required to recruit religion teachers trained in this  Institution. See circular-1979 from the Department of Education. The Catholic Church has complete control, as the Irish State just handed it to them.

The Document on School Autonomy from the Department of Education states that:-

While, as noted above, the operating rules for schools are largely set by the State, the ethos espoused by the trustees/patrons can inform aspects of how those operating rules are acted upon in schools. For example, a denominational primary school may determine the content of its religious education curriculum on the basis of the school’s religious ethos. It is important to highlight that choice of ethos in Ireland is an area in which there is much independence.”

It is clear that Patron bodies (mainly the Catholic Church) have complete control over how the operating rules set by the State are acted on in schools. It is also clear that the State has no control over the Characteristic Spirit (ethos) of any school. This can only mean that the children of atheist and secular families and religious minorities will be receiving Vatican sex education that is contrary to their convictions.

This undermines the Constitutional and Human Rights of parents and their children and we must challenge it. The Minister for Education & Skills Richard Bruton must put in place legislation to ensure that the curriculum is delivered in an objective, critical and pluralistic manner as per the Recommendations of the Irish human Rights & Equality Commission.

In their Report on Religion & Education; A Human Rights Perspective they recommended that:

“Section 15 of the Education Act should be amended to provide for modifications to the integrated curriculum to ensure that the rights of minority faith or non faith children are also recognised therein. In this regard, the State must take sufficient care that information and knowledge included in the curriculum is conveyed in an objective, critical and pluralistic manner with the aim of enabling pupils to develop a critical mind with regard to religion in a calm atmosphere which is free of any misplaced proselytism.”
The also stated that:-

“The key phrase here is the requirement on the State to take “sufficient care that
information and knowledge included in the curriculum be conveyed in an objective, critical and pluralistic manner for the purposes of Article 2 of Protocol No 1. The meaning of the term “objective, critical and pluralistic” is repeated throughout the Court’s case law. As stated, its purpose is to enable pupils to develop a critical mind with regard to religion in a calm atmosphere which is free of any misplaced proselytism.”(para 256, p 83)

The IHREC recommended in their submission on the Education (Admissions) to Schools Bill that:

“The Commission recommends that the new section 62(6) to be inserted into the
Education Act should be amended to the effect that, in setting out the characteristic spirit and general objectives of the school, outside the specific context of faith formation and religious instruction which parents wish to avail of and where exemptions apply, regard shall be had to providing information in relation to religion in an objective, critical and pluralistic manner that avoids indoctrination.”