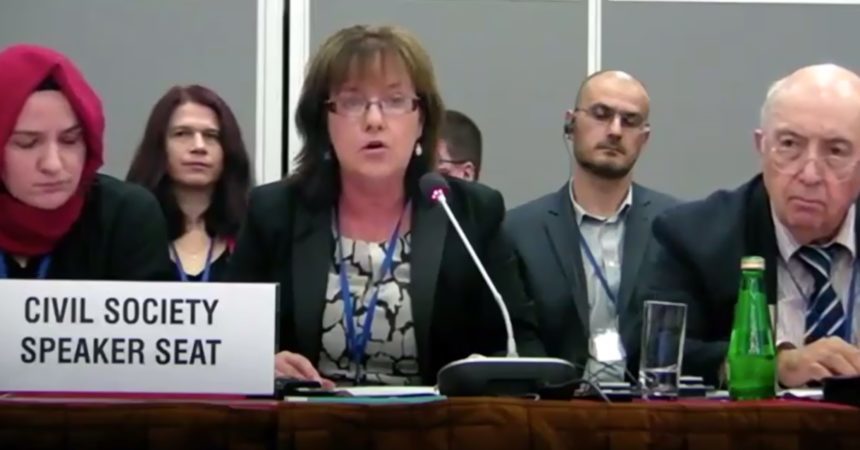 While the Holy See was trying to fool the OSCE about this last week in Warsaw, the Irish State just sat there and said nothing. This Republic has nothing to say about its failure to protect the human rights of minorities in our publicly funded schools.

Last Tuesday, at the OSCE Human Dimension Implementation Meeting in Warsaw, Atheist Ireland recommended that Ireland stops breaching the human rights of atheists, secularists and members of minority faiths. This includes in publicly funded schools, run by the Catholic Church, that breach the human rights to freedom of religion and belief, freedom from discrimination, equality before the law, and the right to an effective remedy. You can read details of the exchange here:

The Irish State did not respond to Atheist Ireland regarding the Irish education system, but a foreign State, the ‘Holy See’, to whose agents our Republic has ceded control of most of our schools, responded as follows:

“With regard to a statement (made by Atheist Ireland) on the schools run by Catholic entities in Ireland, the Holy See wishes to note that such schools are managed by different entities inspired by Catholic faith, but in no way depending from the Holy See, while subject to Irish laws and authorities, and the right of parents to ensure that the religious and moral education of their children is in conformity with their own convictions, read jointly with the right to autonomy of religious communities, implies the right of religiously inspired schools to freely decide on the admission of their own students.”

The Holy See is talking here about our publicly funded National School system. Unlike in other countries, there is no parallel system of State-funded non-denominational schools in Ireland where the majority of pupils attend.

The Holy See regards itself and is recognised internationally as a State, although the basis for that claim has been contested. In their Report to the UN Committee on the Rights of the Child, they stated that:

“1. The Holy See is a sovereign subject of international law having an original, non-derived legal personality independent of any authority or jurisdiction. The Holy See has diplomatic relations with 179 States and participates as a Member and/or non-Member Permanent Observer to the United Nations (UN) and several specialized Agencies of the UN System, as well as in various universal or regional Intergovernmental Organizations.

2. The internal law of the Catholic Church defines the Holy See as the government of the universal Church composed of the Pope and of the institutions which proceed from him (cf. Code of Canon Law (CIC) 361; cf. Code of Canons of the Eastern Churches (CCEO) 48).”

“In consideration of its singular nature and position, the Holy See, in acceding to this Convention, does not intend to [derogate] in any way from its specific mission which is of a religious and moral character”

The Holy See justified the denial of the rights of minorities in the Irish education system by claiming autonomy for the Catholic Church in Ireland (which is the main patron body of Irish schools). They said this while also claiming that the Church in Ireland in no way depends on the Holy See. Now where have you heard all that before?

The Holy See has signed up to protect those rights, and admonishes others for not protecting those rights. It believes that human rights are whatever they say they are, as long as they do not interfere with their specific mission, which is to evangelise.

The UN Committee on the Rights of the Child

“32. Introduction. The Holy See promotes and encourages the system of Catholic schools, which are not State institutions but nonetheless have a public function. The educational activities are carried out in accordance with the Catholic school’s own authority and responsibility under canon law, and pursuant to the laws of the respective States in which they operate:”

The Holy See has told the UN Committee on the Rights of the Child that schools under the authority of the Catholic Church have a responsibility under canon law. In essence this means that that Holy See is pretending that it does not have control over the Irish Education system.

Canon law bears no resemblance to human rights law. Please do not try to tell us that canon law reflects human rights law, and that the Holy See is committed to respecting and promoting the human rights of all. That is just not credible.

Irish law gives exemptions to schools under the control of the Catholic Church to discriminate against minorities on religious grounds. There is simply no justification for this religious discrimination and it is certainly not proportionate.

The Ombudsman for Children in Ireland

On Wednesday the day after the comments by the Holy See to the HDIM Meeting in Warsaw, the Ombudsman for Children in Ireland, Niall Muldoon stated during the launch of their Annual Report that:

“It is my view that the autonomy afforded to Irish schools means that the Government has not been able to exercise the necessary responsibility and oversight. It is time to recalibrate the balance between the autonomy of schools and the oversight by Government to advance and protect children’s rights within the education system.”

This is not only the view of the Ombudsman for Children. The Irish Human Rights & Equality Authority has also made recommendations in relation to the protection of the rights of minorities in the education system. In addition there are now nine Recommendations from the United Nations and Council of Europe regarding the religious discrimination and breach of human rights in the Irish Education system.

The State has ceded control of schools to the Church

In our Republic agents of a foreign state have control over our education system and the rights of parents and their children. The Supreme Court has described the relationship as the State ceding control to the Church.

In a recent Document on Advancing School Autonomy the Dept of Education & Skills outlined these issues. This clearly shows how our Republic cedes control to the Catholic Church, which considers itself to be a foreign State relative to Ireland.

While, as noted above, the operating rules for schools are largely set by the State, the ethos espoused by the trustees/ patrons can inform aspects of how those operating rules are acted upon in schools. For example, a denominational primary school may determine the content of its religious education curriculum on the basis of the school’s religious ethos. It is important to highlight that choice of ethos in Ireland is an area in which there is much independence.”

Where does this leave parents and children in our Republic’s publicly funded schools? It leaves them under the control of a Church that swaps at will between being a religion and being a foreign state. This foreign State claims internationally they are not responsible for the running of Catholic schools in Ireland, while at the same time claiming elsewhere that Catholic schools in Ireland come under Canon Law. While the Holy See was trying to fool the OSCE about this last week in Warsaw, the Irish State just sat there and said nothing. This Republic has nothing to say about its failure to protect the human rights of minorities in our publicly funded schools.