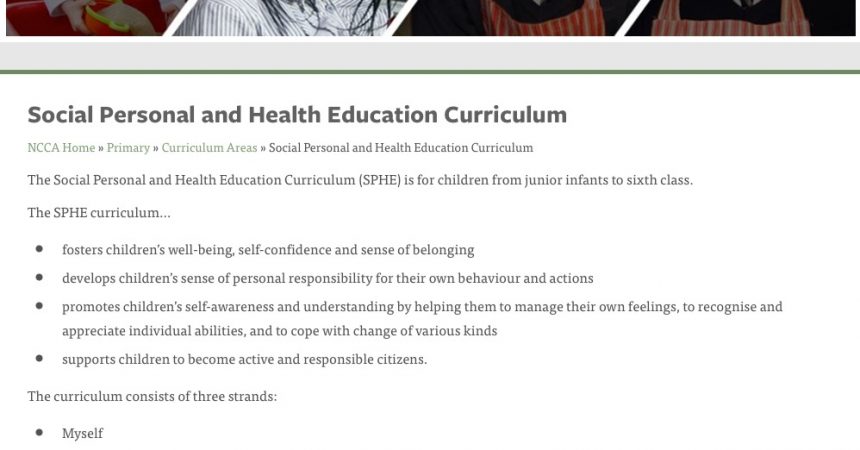 Irish schools integrate religion into Social, Personal and Health Education (SPHE) at both primary and second level, contrary to the UN Convention on the Elimination of Discrimination against Women. Atheist Ireland has made a Submission to the Irish Human Rights & Equality Commission in relation to this. The Action Plan introduced yesterday by the Minister for Education, Richard Bruton, will do nothing to ensure that girls and adolescents can access their right to objective SPHE education.

Parents are not made aware that their children will be denied their right to objective information on SPHE, and that Relationship and Sexuality education will be delivered in accordance with the teachings of the Catholic Church. This is part of the religious integrated curriculum that takes place in the majority of Irish schools. Religion is not just one subject, but is integrated into all subjects under the curriculum and the daily life of the school.

Right to objective information on SPHE

Atheist Ireland has made a Submission to the Irish Human Rights & Equality Commission in relation to the UN Convention on the Elimination of Discrimination against Women (CEDAW). We have raised the issue of the right to access objective information on sexual and reproductive health in the Irish Education system. IHREC had invited Submissions on the  CEDAW, as Ireland is to be examined by the CEDAW Committee in 2017.

The right to health encompasses access to education, and information on sexual and reproductive health. In the majority of schools in Ireland, Social Personal and Health information is delivered through the lens of the Catholic Church. The State has put in place laws and policy that gives control over the education of children to the Catholic Church. Church and State ensure that a local Bishop controls the Relationship and Sexuality education of children.

Recommendation by IHREC to guarantee access to objective SPHE

The Irish Human Rights & Equality Commission made a Recommendation on the Education (Admissions to Schools) Bill 2014, seeking an amendment to the Education Act 1998 to ensure that the State Curriculum is delivered in an objective, critical and pluralistic manner. This would ensure the right to information and education on SPHE and Sexual and Reproductive health in an objective manner that respects the rights of all.

That issue will be coming up again shortly with the introduction by the Minister for Education & Skills, Richard Bruton of another Education (Admissions to Schools) Bill 2016.  That Bill has now gone forward to the Oireachtas Committee on Education and it will be possible to lobby the members of the Oireachtas Education Committee and your local politicians to amend the Education Act 1998 to ensure that this discrimination ends.

Atheist Ireland will be making Recommendations on that Bill to the Oireachtas Committee and we will be publish them. Unfortunately, protecting the rights guaranteed by the CEDAW are not a priority for this government. The Action Plan introduced yesterday by Richard Bruton does not even recognise these rights.

This is from the The Catholic Preschool and Primary Religious Education Curriculum for Ireland: The Catholic Preschool and Primary Religious Education Curriculum for Ireland states that (p.35):

“Concepts outlined under the Morality strand unit: RSE in a Christian Context complement the State Curriculum for Relationships and Sexuality Education in the Republic when taught in Catholic schools.” 1.1  Atheist Ireland is an Irish advocacy group. We promote atheism and reason over superstition and supernaturalism, and we promote an ethical, secular society where the State does not support or finance or give special treatment to any religion. Since being formed in late 2008, we have campaigned for a secular Irish Constitution, parliament, laws, government, and education and healthcare systems.

1.2 This Submission outlines how the Irish State has failed to ensure that children and adolescents have Social, Personal and Health education in an objective and neutral manner and free from religious influence.

1.3 Article 10 of the Convention of the Elimination of Discrimination against Women states that:

“States Parties shall take all appropriate measures to eliminate discrimination against women in order to ensure to them equal rights with men in the field of education and in particular to ensure, on a basis of equality of men and women:

(c) The elimination of any stereotyped concept of the roles of men and women at all levels and in all forms of education by encouraging coeducation and other types of education which will help to achieve this aim and, in particular, by the revision of textbooks and school programmes and the adaptation of teaching methods;

(h) Access to specific educational information to help to ensure the health and well-being of families, including information and advice on family planning.”

2.1 At Primary and Junior Certificate Level Social, Personal and Health Education (SPHE) is delivered according to the ethos of the Patron. The vast majority of schools at both primary and second level have a religious ethos.

2.2 The right to health encompasses access to education and information on sexual and reproductive health. The UN has said that:

“The Committee on the Rights of the Child has recognised that “States parties should provide adolescents with access to sexual and reproductive information, including on family planning and contraceptives, the dangers of early pregnancy, the prevention of HIV/AIDS and the prevention and treatment of sexually transmitted diseases (STDs).”

“Similarly, the Committee on the Elimination of Discrimination Against Women has underscored the need to pay particular attention “to the health education of adolescents, including information and counselling on all methods of family planning.”

The Committee has further specified that health education for adolescents should address “gender equality, violence, prevention of sexually transmitted diseases and reproductive and sexual health rights.”

2.3 The education system in Ireland fails to protect minorities from religious discrimination because the State gives priority to religious beliefs over philosophical convictions. The majority of schools in Ireland at both primary and second level have a religious ethos. Religion is integrated into the state curriculum.

2.4 Parents in Ireland have no choice but to send their children to schools where religion is integrated into social, personal and health information, the state curriculum is not delivered in an objective, critical and pluralistic manner. The state cedes control to the interests of private Patron bodies. None of these Patron bodies have ratified the Convention on the Elimination of Discrimination against Women.

2.5 The Education Act 1998 does not oblige any school to deliver the state curriculum in a neutral and objective manner and parents are left dealing with Boards of Management who are legally obliged to uphold the ethos of the Patron who in the majority of cases is a religious body.

3.1 In July 2014 when Ireland appeared before the UN Human Rights Committee under the International Covenant on Civil & Political Rights they were asked:

“How does the Delegation explain the compatibility with the Covenant of a state of affairs that allows private schools, which have a near monopoly in Ireland on a vital public service, to openly discriminate in admission policies between children on the basis of their parents’ religious convictions?

3.2 The Irish State has never responded to this question. There is no neutral studying environment in Irish Schools outside the religious instruction classes.

4.1 IHREC has recommended in their submission on the Education (Admissions) to Schools Bill that:

“The Commission recommends that the new section 62(6) to be inserted into the Education Act should be amended to the effect that, in setting out the characteristic spirit and general objectives of the school, outside the specific context of faith formation and religious instruction which parents wish to avail of and where exemptions apply, regard shall be had to providing information in relation to religion in an objective, critical and pluralistic manner that avoids indoctrination.”

4.2 There is the option to opt out of SPHE under Section 30.2 (e) of the Education Act 1998 which does not oblige any student to attend instruction in any subject which is contrary to the conscience of the parent of the student or in the case of a student who has reached the age of 18 years, the Student.

4.3 There are two issues in relation to the above:

4.4 Children are receiving SPHE contrary to the convictions of their parents and not in accordance with the rights guaranteed under CEDAW.

5.1 In Ireland, the State cedes control of the education system to private bodies. The State has failed to put in place laws and policy that would ensure that children and adolescents can access Social, Personal and Health information in a neutral studying environment, free from religious influence, and in accordance with the rights guaranteed under the Convention on the Elimination of Discrimination against Women.