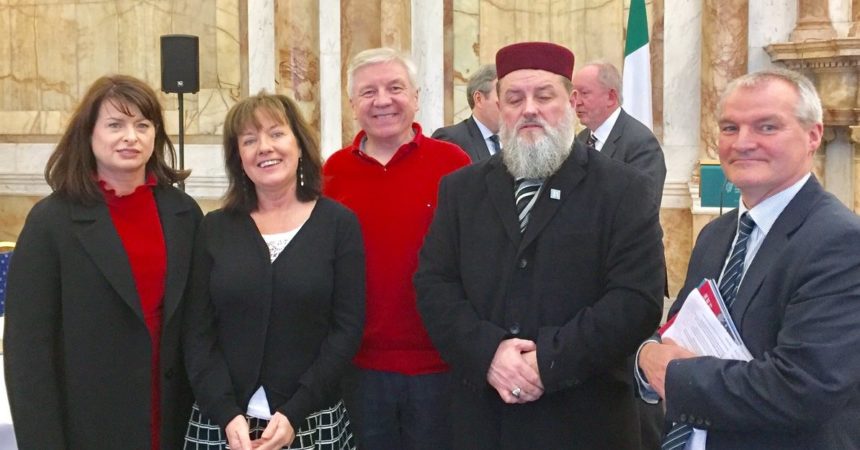 Atheist Ireland, the Evangelical Alliance of Ireland and the Ahmadiyya Muslim Community of Ireland, attended a Council of Europe human rights round-table conference today in the Department of Foreign Affairs.

At this conference, Council of Europe Human Rights Commissioner Nils Muiznieks called on civil society organisations to work alongside Council of Europe Institutions to protect human rights. He said that “we must make it politically and legally costly for states to ignore their human rights obligations.”

Our secular alliance asked about religious discrimination against minorities in the education system. We had already raised these issues at a separate meeting on Tuesday with Commissioner Muiznieks. You can read our report of that meeting here.

At today’s conference, there was a significant reaction to the fact that we had an alliance present between Atheists, Evangelicals and Ahmadiyya Muslims. It was seen as a unique and important step in having the religious discrimination in schools addressed as a human rights and equality issue, and not one of sectoral self-interest.

We outlined the problems that we face as minorities both in access to school and, more importantly, within the schools, where religion is integrated throughout the whole curriculum. Children cannot opt out of this religious ethos. Ultimately the problem is not lack of parental choice: it is that the patronage system itself, with multiple ethos, leads to segregation and inequality. Today’s conference was introduced by Eoin O’Leary of the Department of Foreign Affairs, and the two sessions were chaired by Commissioner Muiznieks and Liam Herrick, Executive Director of the Irish Council of Civil Liberties. Also at today’s conference:

The Council of Europe is the continent’s leading human rights organisation. It includes 47 member States, 28 of which are currently members of the European Union. Today’s conference was organised by The Centre for Criminal Justice & Human Rights, University College, Cork and The Irish Council for Civil Liberties.