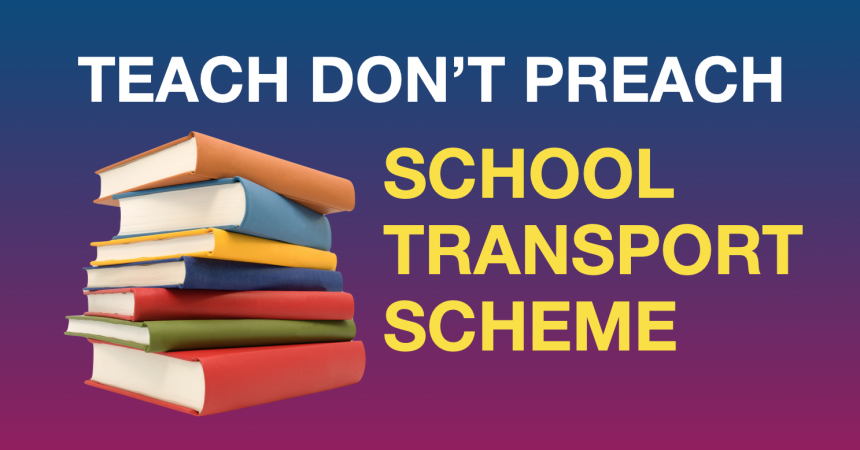 Atheist Ireland and many parents are challenging the second level school transport scheme, which is unjust and discriminatory. And Ruth Coppinger TD has asked the Minister for Education the latest in a series of Dail questions, which you can read below, in relation to the scheme.

For some time Atheist Ireland and many parents have been seeking information on the rules of the School Transport Scheme. Various TDs have asked Dail questions, but the answer is always the same. They never get to the bottom of why the scheme operates in such a discriminatory manner.

As far as we can ascertain, the basis of how the Scheme works is outlined in a Value for Money Review that is available on the Department of Education’s website. You can read the review here.

The Circular Letter states the following in relation to the criteria over religious ethos.

“Children are eligible for transport where they reside not less than 4.8 kms from and are attending their nearest education centre as determined by the Department/Bus Éireann, having regard to ethos and language.”

Answers to previous Dail questions, and refusals of access to parents who have applied under the scheme, have clarified that the word ‘ethos’ refers only to religious ethos.

The discriminatory nature of the School Transport Scheme

What does this mean in practice? If your nearest second level school is within a distance of 4.8km from your house, then you have to pay the travel costs yourself to get your child to the school. But if your nearest school is outside that distance, then the Transport Scheme will pay most of those travel costs.

The problem arises if all of your local second level schools, that are within the required distance from your house, have a religious ethos that you don’t want to send your child to for reasons of conscience. For example, if all local second level schools within the distance are Catholic schools, and you are a Protestant and don’t want to send your child to a Catholic school.

So what happens then? In that case, the School Transport Scheme will cover most of the costs to bring your child to the nearest second level school, that is of your preferred ethos, and that is outside the distance — but only if that school also has a religious ethos.

The scheme also applies to second level fee paying Protestant schools. Church of Ireland families, Catholic families, non-Religious families etc., can access the Scheme if they want to send their children (and can afford it) to a fee paying second level school with a Protestant ethos.

There are many ambiguities in how the Scheme is described, and how it operates on the ground, including differences between how it operates at primary and second level, and how the refusal of applications for transport correspond with descriptions of the Scheme in documents such as the 2011 Value for Money report.

Atheist Ireland is continuing to investigate exactly what the criteria for the Scheme are, and the basis for those criteria. In the meantime, we are continuing to work with parents throughout the country, who are currently being denied access to the Scheme at second level, on the stated basis that it only applies to schools of a religious ethos.

It is difficult to understand how any Minister for Education could stand over such an unjust and discriminatory scheme. Unfortunately, successive Ministers for Education from various political parties have done nothing to end this discrimination.

Ruth Coppinger TD has asked the following Dail questions in relation to the scheme. We hope that the Minister will not dodge the answers to these questions, and will move to ensure that parents that wish to send their children to a second level Educate Together schools can access the scheme on the same basis that parents who wish to send their children to Protestant schools can.

“to ask the Minister for Education and Skills given that the ethos condition in the post primary school transport scheme refers only to minority religious faiths, if he believes this constitutes discrimination against other minorities, such as those with no religious faith, wishing to attend an Educate Together secondary schools; and to make a statement on the matter.”

“to ask the Minister for Education and Skills if a record is kept of the religion of the students qualifying for the post primary school transport scheme to attend minority religious faith schools; if so, to outline these figures”

“to ask the Minister for Education and Skills if he will ensure that Educate Together secondary schools qualify for the post primary school transport scheme on the same basis as minority religious faith schools given these schools are mostly chosen by those not wishing to avail of a school that is of the main religious ethos in the State.”