In ETB schools and colleges, Catholic Diocesan Advisors behave like the School Inspectorate of the Department of Education & Skills. The Diocesan Advisors run an annual seminar and in-service days for religion teachers who teach in State-run ETB schools. They also provide schools with endless documents for the Religion classes and have control over the hiring of religion teachers.

Meanwhile the Catholic Church sees itself as having control over the Religion curriculum. They stated in the Guidelines for the Faith Formation and Development of Catholic students that: 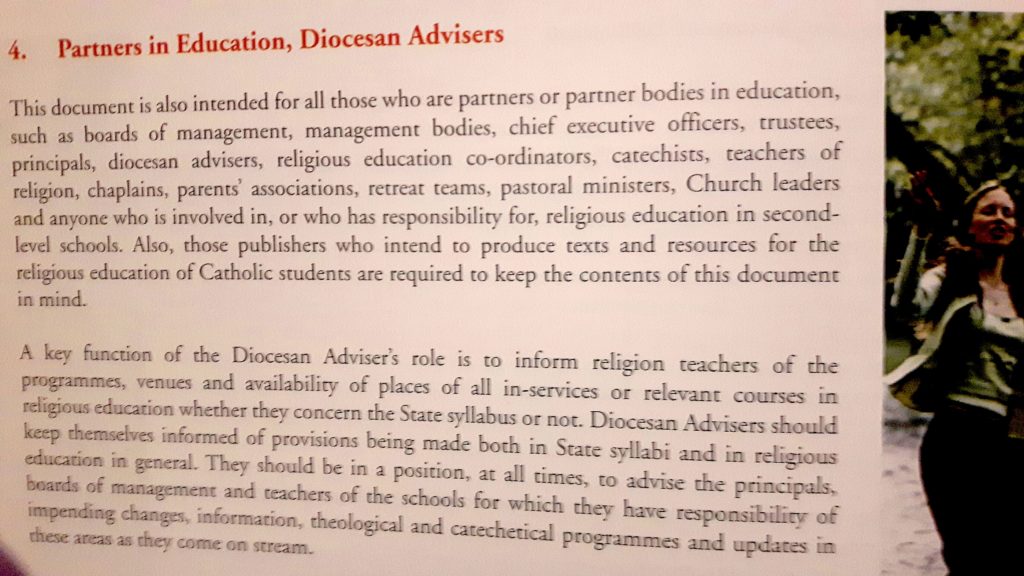 Following our recent crowd-funding appeal for FOI charges from the ETBs, we have seen hundreds of documents from Diocesan Advisors to ETB schools and colleges.

ETB schools and colleges make religion compulsory and minorities have no choice but to take Catholic religious instruction which is integrated into the State Religious Education curriculum.

The Guidelines for the Faith Formation and Development of Catholic students States that:

“Teachers of religion should be people with a faith commitment and  recognised professional qualification to do the work competently.”

The Report does not mention the fact the there is a Constitutional Right to opt out of religion and that making religion compulsory breaches the rights of minority parents and their children.

The Subject Inspection Report before St. Paul’s was from Pobalscoil Iosolde on 26th April 2013, this is an ETB Community School.  Again no mention of the Constitutional right to opt out and the fact that Catholic religious formation is being integrated into the State syllabus on religion.

Another ETB school, Colaiste Pobail Setanta, Phibblestown, Clonee, had a Religious Subject Inspection on 21st March 2013.  Nothing was mentioned in this Report about the integration of Catholic faith formation into the State syllabus or the Constitutional right of Parents to opt out their children from religion.

The Religious Education policy of Colaiste Pobail Setanta has not changed. They are still forcing children to take religion classes which includes Catholic faith formation.

“All students in the college will follow the Junior Certificate Religious Education syllabus, without exception.

The Department of Education has always known that minorities were being forced into Catholic religious formation in all publicly funded schools, including ETB schools and colleges.

The right of the child to freedom of conscience, religion and belief