Dublin and Dun Laoghaire ETB community colleges, despite having no religious patron and no official partnership with the Catholic Church, make religious education mandatory. These schools are presented as the alternative to Catholic schools in Ireland.

This article illustrates the extent of this problem, and includes links to other documents about religion in Dublin and Dun Laoghaire ETB schools. Atheist Ireland obtained this information under the Freedom of Education Act.

ETBs across the sector charged such high fees for FOI requests that Atheist Ireland had to initiate a crowd-funding campaign to access the information.

In fairness to Dublin and Dun Laoghaire ETB, they are the only ETB who did not charge us any fees to obtain the information that we requested under the FOI Act.

In 2016, the General Secretary of ETBI met with representatives of the Roman Catholic Church in Maynooth. An extract from this meeting. Link here (FOIWWETBMemoamended img-Y22193248-0001-1)  is illustrated below. This is the message from the ETBI that was given to all CEOs of all ETBs in the country.

The Mater Dei is now a College of Dublin City University, but it still has a religious ethos.

The ETBI has not published this document, but the current draft is among the documents that we obtained from Dublin and Dun Laoghaire ETB. You can read it here:

Mandatory RE in Dublin and Dun Laoghaire ETB schools

This atmosphere of religiosity, across the ETB sector, creates significant problems for non-religious and minority faith parents, who wish to opt their children out of religion classes.

For example on 18th January 2017, Dublin and Dún Laoghaire ETB undertook a survey of the schools that they manage, in order to find out how many make religion classes mandatory for students.

In the extract from the survey results illustrated below, the answers from designated colleges have been redacted.

These designated colleges come under the full patronage of the ETBs, but have an Agreement in place, called the Model Agreement, with a local bishop, to have Catholic religious instruction and worship in the school, and also a Representative on the Board of Management.

However, the non-designated ETB community colleges (the ones listed in the illustration below) are fully State-owned and fully State-managed. They are under the sole patronage of the ETB, and have no religious representative on the Board of Management.

Nevertheless, nearly all of them still make religion classes mandatory for all years. And if you exercise your constitutional right to opt out, they refuse to provide an alternative subject. 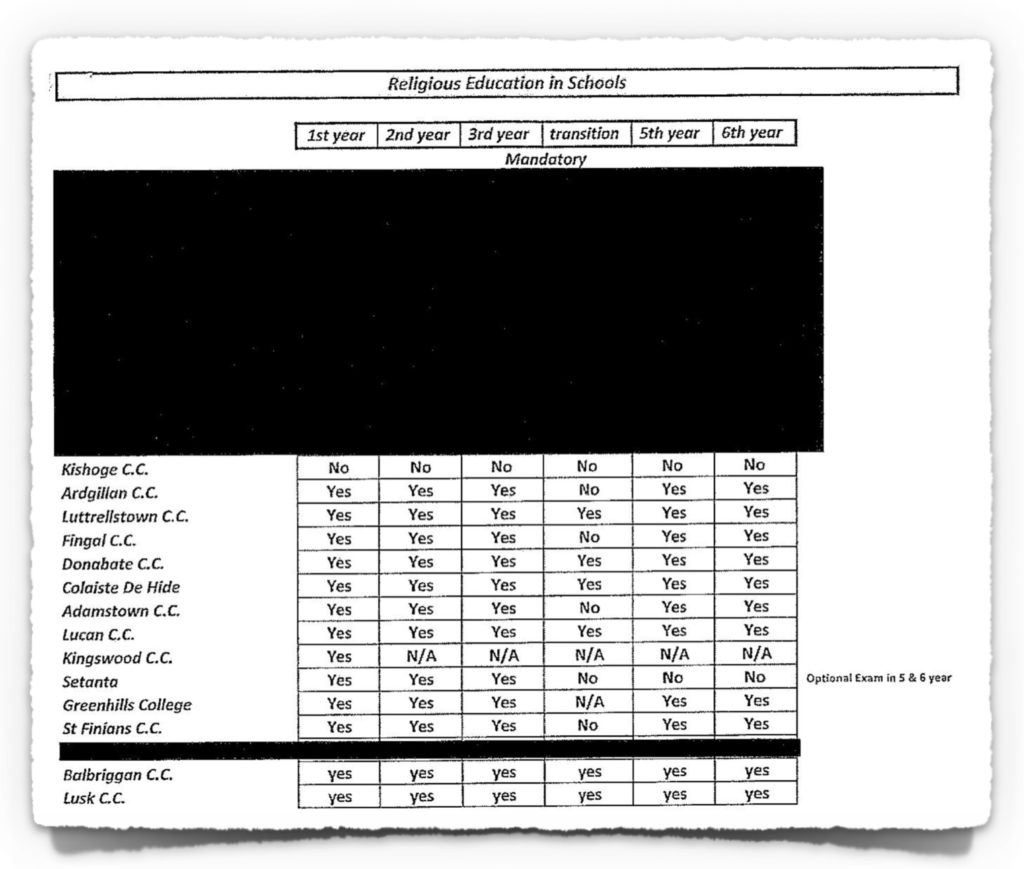 These non-designated community colleges are supposed to provide the State alternative to Catholic schools, at second level, for non-religious parents in Dublin and Dun Laoghaire. These are the schools that are presented has having no involvement from religious patrons.

Use of ETB school premises for Catholic Sacramental Preparation

Most recently, in October 2017, there was a disagreement between Dublin and Dun Laoghaire ETB and the Catholic Church about the use of school premises, after school hours, for Catholic Instruction and Sacramental Preparation.

The Principal of Lucan Community School was refusing to allow the Catholic Church to do this, and she said that this was the policy of the ETB.

We will seek clarification about how this issue was resolved. But however it is resolved, it shows that it is possible for state-run ETB schools to stand up to the Catholic Church if they choose to do so. 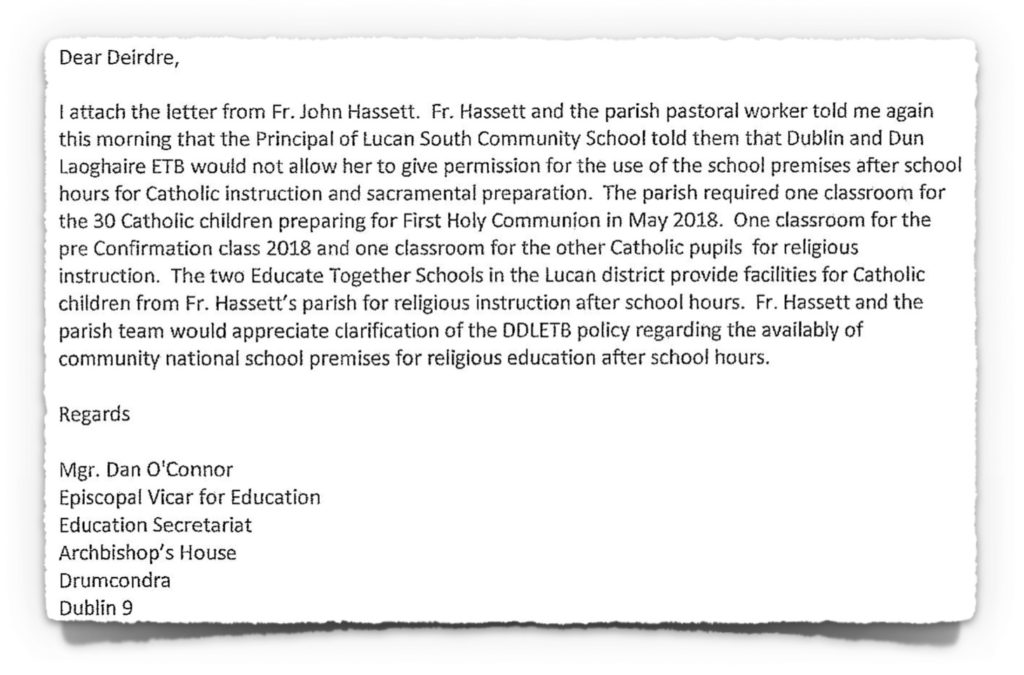 Links to other documents

Atheist Ireland obtained many more documents under this FOI request than those that this article refers to. Here are links to some of the documents that we obtained from Dublin and Dun Laoghaire ETB.

The numbers refer to the sequence in which Dublin and Dun Laoghaire ETB numbered the pages that they sent to us. Some documents have more than one page: where this is the case, the file number is that of the first page of the document.

FOI DDL ETB 1 — Archbishop nomination to Board of Management, 2015