Following our recent crowdfunded campaign of FOI requests, Atheist Ireland has discovered that ETB schools and colleges are not only integrating Catholic sex education into Relationship and Sexuality Education, but they are paying the Catholic group Accord to deliver this teaching.

ETBs are Education and Training Boards. They are state bodies that directly run schools, in contrast to schools that have a religious patron body.

Under the Council of Europe Social Charter, all children have a right to education and information about sexual and reproductive health. Religious doctrine, such as the Catholic teachings on homosexuality, abortion, and contraception, should be confined to religious environments. These religious ideas have no place in RSE classes as part of the SPHE curriculum in second level schools.

Atheist Ireland and the United Nations

After Atheist Ireland specifically raised this issue with them, the United Nations Committee on the Rights of the child has Recommended that Ireland:

Circular Letter RSE 0037 2010 from the Department of Education to all schools states the following:

“Access to sexual and health education is an important right for students under the terms of the Article 11.2 of the European Social Charter. The Council of Europe European Committee of Social Rights, which examines complaints regarding breaches of the Charter, has indicated it regards this Article as requiring that health education “be provided throughout the entire period of schooling” and that sexual and reproductive health education is “objective, based on contemporary scientific evidence and does not involve censoring, withholding or intentionally misrepresenting information, for example as regards contraception or different means on maintaining sexual and reproductive health.”

ETB schools are using Catholic teaching from Accord

St Kevin’s Community College in Dunlavin, Co Wicklow, is an ETB school, which is fully State-funded with no religious patron. The letter illustrated below is how this school informs parents that the RSE components of the SPHE class are coming up. 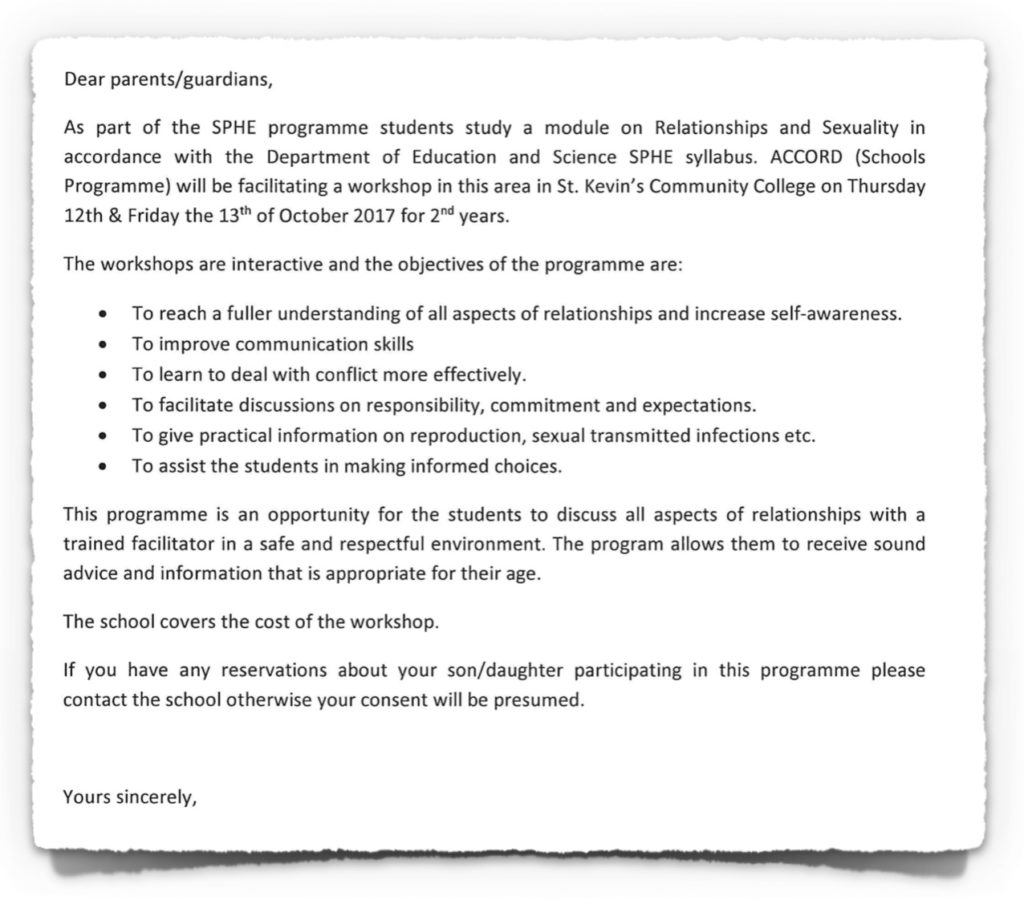 The Accord Relationship and Sexuality Education course does not present objective information about sexuality. Accord is a Catholic agency and it provides Sex-Education courses for adolescents, which are informed by Catholic teachings. This is not consistent with the European Social Charter, the Circular Letter 0037 2010 from the Department of Education, or the Recommendation from the UN Committee on the Rights of the Child.

ETB schools are paying Accord for this Catholic teaching

Furthermore, it is not merely the case that SPHE teaching in the ETB sector is being informed by the religious teachings of one particular denomination. In fact, the ETB schools are using public money to pay for this. Recall that St Kevin’s Community College in Dunlavin Co Wicklow, is fully state funded and has no religious patron. The invoice below is for the Accord Catholic Relationship and Sexuality Education Programme in the school. 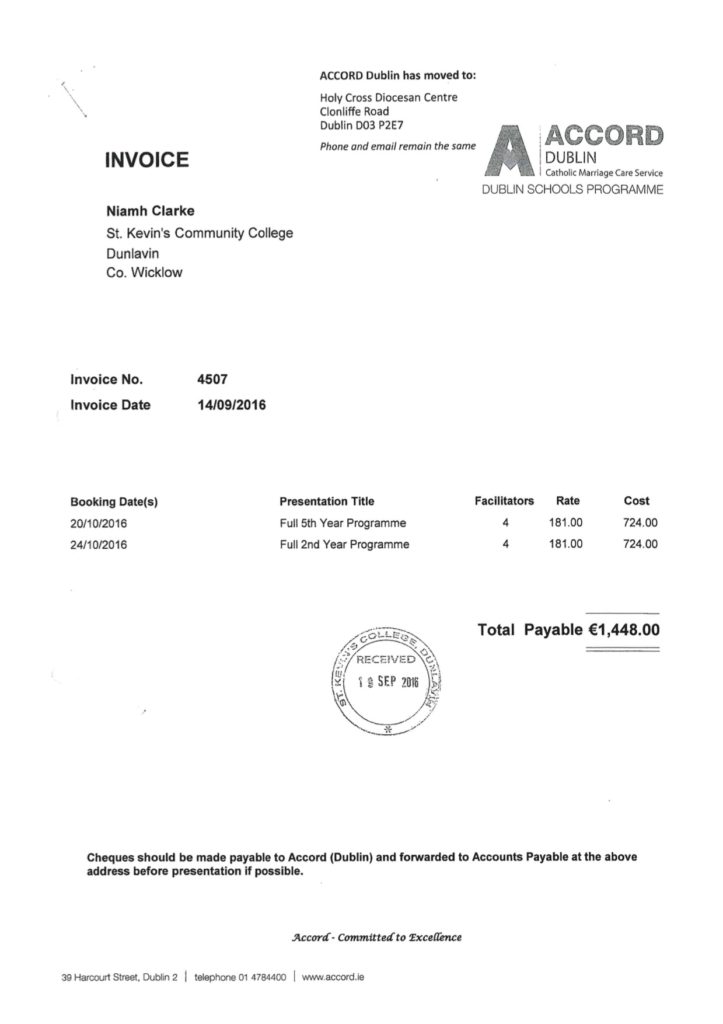 ETB sector has no regard for the rights of the child

This is just one of six schools under the patronage of Kildare and Wicklow ETB alone, which pays Accord from public funds. These are not small sums for schools to pay, especially for content that is superfluous. There is no reason why any SPHE teacher can’t teach the full State SPHE curriculum defined by the NCCA.

That Catholic schools replace the RSE part of SPHE with religious content is already a scandal. Some schools even integrate the RSE component of SPHE into Religious education classes. That ETB schools are doing the same thing, and paying extra for it from public funds, is genuinely incredible.

Remember also that the same ETB sector tells non-religious parents and religious minorities that they can’t afford to supervise their children outside the religion class and their children can’t choose another subject.

The ETBs claim that they have no resources for alternative supervision, such that ‘opting out’ often just involves sitting at the back of the class and listening to the Catholic teachings like the rest of the children.

It is clear that ETB schools and colleges have no regard for Circular Letters from the Department of Education, the European Social Charter, or the UN Committee on the Rights of the Child. It follows from this that the ETB sector has no regard for the rights of the child.