The Minister for Education has told Solidarity TD Ruth Coppinger that he will review the practice of ETB schools paying the Roman Catholic Church to train students in faith leadership. Last month Atheist Ireland revealed details of these controversial courses, that train some students to evangelise others, through our freedom of information campaign about religion in ETB schools.

Ruth Coppinger TD raised two courses in particular with the Minister for Education, Richard Bruton. They are run in Kildare Wicklow ETB schools. The Ember Faith Leadership Programme is operated by the Archdiocese of Dublin, and the Meitheal Young Leadership Training is organised by the Diocese of Kildare and Leighlin.

The aim of these courses is to train students to develop a community of Catholic faith within themselves, their school, and also their dioceses. Kildare Wicklow ETB schools have trained about 220 students in the past three years.

The Minister also says that the courses are optional, and that students of all faiths and none can attend them. But why on earth would an atheist, or a Muslim, or a member of another minority faith, want to be trained in Catholic youth leadership?

This can only be seen as an endowment of religion. It goes way beyond helping parents with the religious education of their children. It is also religious discrimination as the ETBs are not paying for the training of children from minority backgrounds to become leaders within their school.

In his reply to Ruth Coppinger, the Minister for Education concludes:

“As you are aware post primary ETB schools are multi-denominational aschools and as such are required to provide for religious instruction according to the profile of students who attend the school.

I will ask the ETB to conduct a review that takes account of the changing composition of the student body. While it seems that the programmes are inclusive, there is a need to proof in the review, for example, that there is no adverse experience for students of minority or no faith.”

The ETBs are legally required to provide religious instruction for all students, not just for Roman Catholic students. And they have no mandate to go beyond that into permeating a Roman Catholic ethos throughout the school by training some students to evangelise other students into that faith.

The Ember Faith Leadership Programme is operated by the Archdiocese of Dublin. The purpose of the programme is to create a team of senior students in schools who will promote Catholicism towards the youngest students. ETB colleges, which are fully State-funded and have no religious patron, are paying The Scripture Union to create these Catholic Youth Leadership teams within their schools.

This is not a hyperbolic interpretation of the purpose of the retreats that ETB schools are paying for. As described in the extract below, the development of Catholic faith in the youngest students by the senior students, is one of the explicit goal of the courses.

These are not merely casual suggestions for the senior students either. The objectives of the Ember Faith Leadership Programme are to create highly organised and active teams, that will evangelise more junior students in a structured manner. The extract below describes the retreat that the senior students participate in, and how they will be told to structure their weekly meetings once they return to their schools.

The cost of evangelising students

These retreats don’t come cheap. Confey College is a ETB school in Leixlip, with no religious patron. Nevertheless, the school was able to find €1,320 this September to create a team of 12 students, who can work on developing Catholicism within the younger students.

It is amazing that ETB schools are able to find money for this kind of programme, while many non-religious parents with children in various ETB schools are told that budget restrictions mean they can’t opt out of religion (as there is no funding available to supervise children elsewhere). An example invoice to Confey College from The Scripture Union for the Ember Faith Leadership Programme, is illustrated below.. 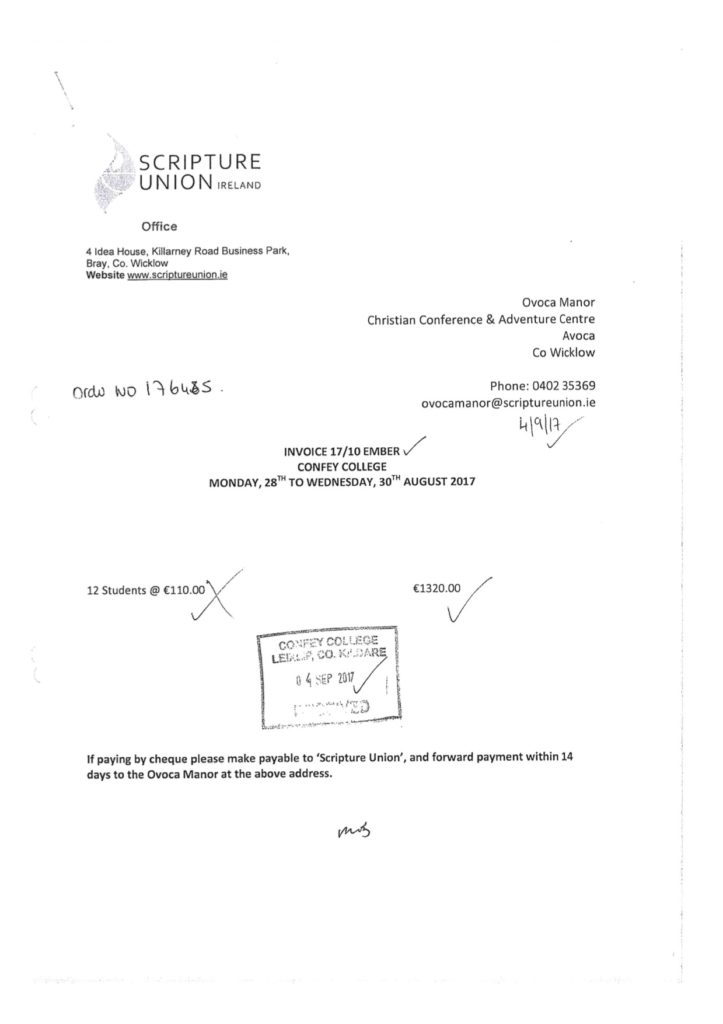 This is not an isolated case in just one diocese. A very similar programme called Meitheal, operates in the Diocese of Kildare and Leighlin too. What distinguishes payments for the Meitheal Young Leadership Training is that they are made directly to the Diocese of Kildare and Leighlin. In fact, the direct involvement of the bishop is an intrinsic part of the training, as illustrated in the extract from the Meitheal Information Booklet below:

Extract from the Meitheal Information Booklet

For example, Scoil Chonglais college in Baltinglass, which has no denominational patron and is fully State-funded. However, the invoice illustrated below describes payments that they have made for Meitheal, directly to the Catholic Diocese of Kildare and Leighlin Faith Development Services. 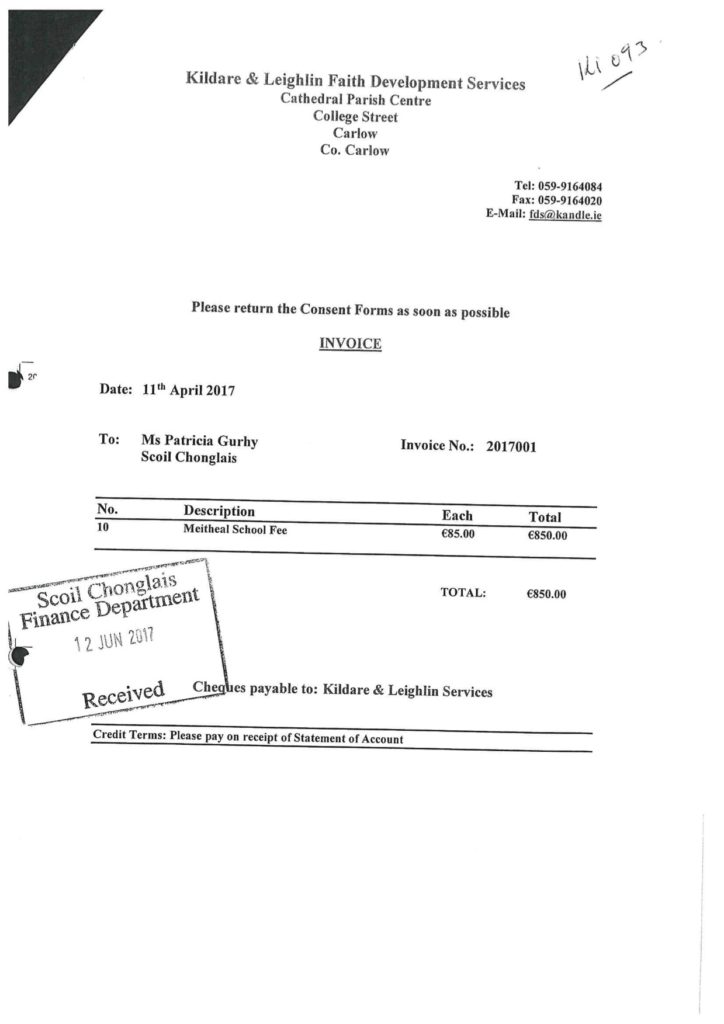 Atheist Ireland thanks Ruth Coppinger TD for following up on this important issue. We also thank everyone who has contributed to our crowdfunding campaign that has made our freedom of information requests possible.