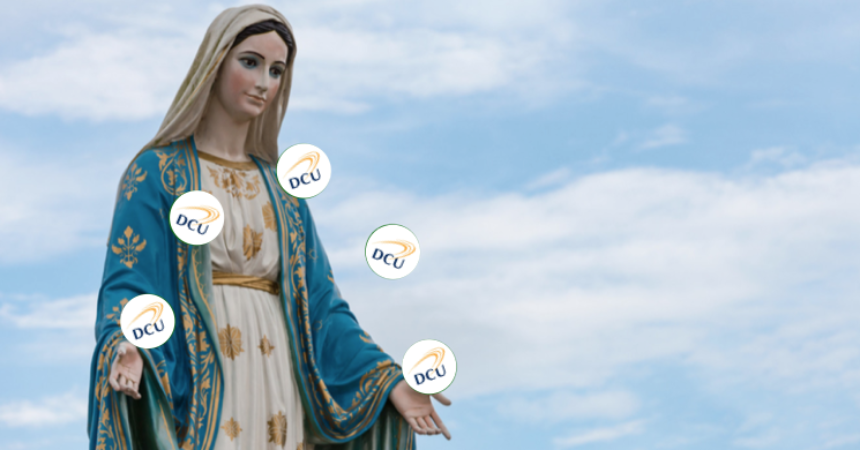 Anne Looney, Dean of Dublin City University’s Institute of Education, has warned the Oireachtas Education Committee that making Religion an optional subject for students in ETB second-level schools has forced trainee teachers to look for work abroad, according to an article in the Irish Examiner.

But Ms. Looney, a graduate of Mater Dei, has known for years that Religion was already an optional subject in these schools, because she forcefully told this to Atheist Ireland in 2010, when she was writing to us as Chief Executive of the National Council for Curriculum and Assessment (NCCA).

Not only that, but in 2010 she emphasised the word optional by putting it in bold text. She wrote to Atheist Ireland:

“Your letter does not refer to the fact that the syllabuses are optional; study of them is not required by the State, nor any of its agencies. If, in the scenario you outlined, schools choose to make them so against the wishes of parents, then that is an issue to be taken up with the relevant school management authorities, and I presume Atheist Ireland has done so.” 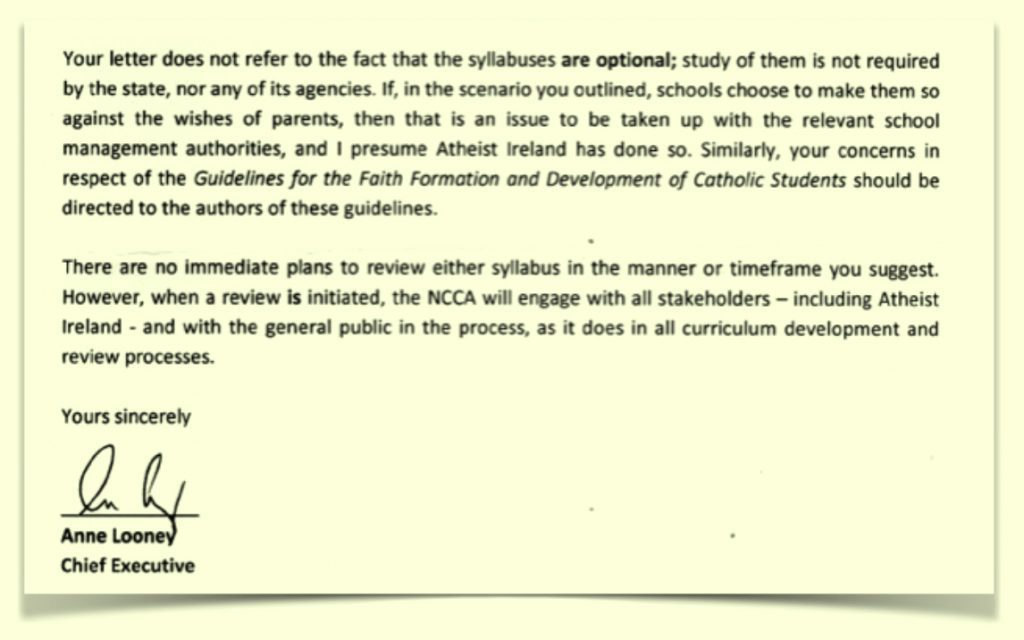 Atheist Ireland has indeed done as Ms. Looney suggested in 2010. We have spent years raising the issue with the relevant school management authorities, and with the ETBs, ETBI, Department of Education, United Nations, Council of Europe, and OSCE, culminating in the recent Directive to ETB schools that she is now complaining about.

The new Directive simply tells ETB schools that they must respect the rights that parents and students have always had to Religion being optional, the same rights that Ms. Looney herself told Atheist Ireland to raise in 2010.

So why is Ms. Looney now, as Dean of DCU’s Institute of Education, acting as if she believes that Religion is suddenly becoming an optional subject? According to the Irish Examiner, she also told the Oireachtas Education Committee:

“When they (trainee teachers) woke up to the recent announcement by the Department about new arrangements for the teaching of religious education in ETB schools, it sent them online looking for international options, as the jobs they expected to move into… appeared to have been swept away.”

Not only has the Dean of DCU’s Institute of Education known since at least 2010 that this Religion course was already optional, she must have also known that the Department of Education has warned ETB schools for at least two years to be prepared for the State requiring the schools to respect the fact that the course is optional.

Atheist Ireland has outlined that sequence of events in this article:

If DCU’s Institute of Education, as part of a secular university, has been allowing trainee religion teachers to believe that the rights of parents and students would be ignored forever, then that was a very irresponsible thing to do.

According to the Irish Examiner, Ms. Looney also told the Oireachtas Education Committee that DCU has over 300 students being prepared to teach religious education at second-level, with either English, history, or music, and that:

“All future developments in the education system, including new subjects or reducing pupil-teacher ratios, must consider the impact on teacher supply that is not always obvious.”

If she means this to apply to the issue of students exercising the right to study subjects other than religion in ETB schools, it would be an extraordinary reversal of the purpose of an education system.

Schools and teachers exist to teach students, including whatever optional subjects that they want to learn. Students do not exist to provide specific jobs for teachers, by prioritising subjects that suit the teachers and their employment preferences.

The DCU Dean does, however, provide a temporary part-solution for the resource issue that the TUI has been complaining about with regard to implementing the new Directive.

She has helpfully highlighted that Religion teachers are also trained in other subjects, such as English, history and music. This means that, even in a worst-case scenario, a school could offer those subjects as alternatives to Religion, without any existing Religion teachers losing their jobs.

In reality, in the vast majority of ETB schools, the Directive can be implemented far more comprehensively than that.

Atheist Ireland has outlined how schools can implement the Directive in this article:

DCU’s Institute of Education and the TUI should be under no illusions about Atheist Ireland’s commitment to ensuring that this new Directive is implemented. If anybody within the system tries to undermine or sabotage it, we will robustly assist all parents and students to ensure that their rights are finally vindicated.

Catholic Church admits studying religion is a disadvantage, but wants the State to impose it anyway