Atheist Ireland is today publishing a new comprehensive report on religious discrimination across the ETB Sector, including Community National Schools. The Education and Training Board (ETB) Sector presents itself as the alternative to denominational schools in Ireland but in reality, these schools can be just as Catholic as those managed directly by the Catholic Church.

You can read the report here:

How ETB Schools Religiously Discriminate without Public Transparency or Accountability

It covers the following areas of concern:

While conducting this campaign, Atheist Ireland has had significant success in lobbying for changes in the ETB Sector. A recent Directive from the Department of Education requires these schools to vindicate the right of students to choose another timetabled curriculum subject instead of religion.

However, many problems remain, not least with respect to transparency and accountability. This is especially relevant as the Minister for Education is giving the ETB sector a central role in overseeing the proposed reconfiguration process (formerly called divestment) of schools from Catholic patronage.

Our efforts to conduct this analysis were initially frustrated by very high costs that were being charged for Freedom of Information (FoI) requests, often for documents that the ETBs should have already made public on their website.

At first, the eight ETBs that we contacted collectively quoted the cost of accessing this information as €8,420. After refining our requests, and including the costs of appeals, we ended up paying €3,300. During November 2017, we launched a crowd-funding campaign in order to finance this.

We have published the most relevant material that we acquired through this campaign on www.teachdontpreach.ie, along with a detailed analysis of the abuses of constitutional and human rights that our campaign has brought to light.

The report that we are publishing today represents a short summary of that material. The report also provides transparency to our donors, by describing how much money was spent on various FoI requests.

What we have discovered through this FoI work lifts a lid on the religiosity across the ETB Sector. It also highlights the lack of democratic accountability that remains.

The ETBI is a private voluntary body registered with the Charities Authority, which has been meeting with the Catholic Church to develop ETB policy, and the public has no official way of knowing how the resulting policies are being imposed within ETB schools and Community National Schools.

Office of the Information Commissioner

In an effort to improve the transparency of the sector, Atheist Ireland also requested that the Office of the Information Commissioner (OIC) should conduct a review into whether or not the ETBI should be subject to FoI legislation. The General Secretary of the ETBI, Michael Moriarty, has previously explained to Atheist Ireland in writing that:

“Each ETB is a separate statutory authority and is the patron of all schools in their functional area. ETBI is a voluntary organisation, and is not a patron body.”

It is clear that the ETBI has no authority to instruct ETB schools, since it is the individual ETBs that are the statutory authorities. But the review carried out by the OIC at the request of Atheist Ireland also found that the ETBI is independent of the ETBs, and does not follow the instructions of the ETBs. This situation is described in the extract from the OIC decision illustrated below. 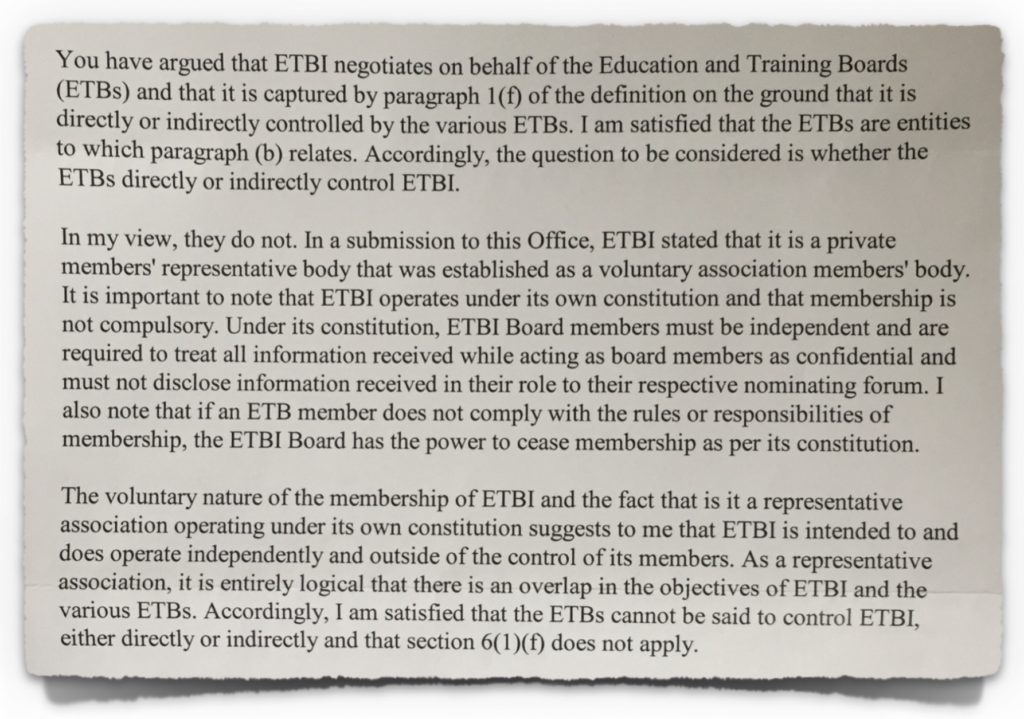 Extract from Decision issued by OIC during March 2018

We now have an extraordinary situation with regard to lack of transparency in the delivery of an essential public service.

For example, RTE’s Emma O’Kelly has reported that if a journalist asks a teacher in one of these schools about the teaching of religion, the teacher must follow a Media Protocol protocol issued by the ETBI that bans them from answering. What other protocols have been agreed between the Catholic Church and the ETBI during meetings in Maynooth? What other protocols have been issued to ETB schools and Community National Schools by the ETBI? The Irish public has no way of knowing and this lack of transparency and accountability across the ETB Sector is undemocratic.

There is no record of the Board of any ETB ratifying this ETBI Media Protocol policy for the Community National Schools. Legally, it is the Boards of the ETBs and not the ETBI that must ratify all policies for schools under ETB patronage. It seems that this Media Protocol policy went from the ETBI as a private body, to CEOs of the ETBs, and is now policy in the Community National Schools. There was no democratic accountability or transparency in how the decisions on this policy were made. The process gives the ETBI as a private body, complete control over policy in publicly funded schools. The Boards of the ETBs have been sidelined. It also means that there is no consultation with regard to policy in the Community National Schools.

As another example, RTE’s Emma O’Kelly has reported on dress code policies for teachers in ETB Community Schools. She concluded that: ‘The restrictions they place on their employees, and the exhaustive detail they go into, seem extraordinary for any school, but most especially for multi-denominational state schools, freshly established in recent years, and ostensibly geared towards serving and reflecting the young modern communities that they have been established to serve.’ These policies were later suspended. Yet there is no record of where the policies originated at ETB level. None of the CNS schools had boards of management in place at the time that the dress codes were written.

How can this sector fairly manage the divestment process?

This lack of transparency has wider implications. In 2017, Minister for Education Richard Bruton announced that the ETB Sector would be central to his strategy for the reconfiguration (formerly called divestment) of patronage, in order to create more multi-denominational schools. His announcement commented as follows:

“This new process for supporting transfers of schools to multidenominational patrons, in response to the wishes of local families, is based around principles of transparency and cooperation … The ETBs will each identify towns or areas where there is likely to be demand from families for greater diversity and work with pre-school services to establish evidence of this demand among the cohort of pre-school parents, via surveys.”

It is hard to imagine how transparency could be a feature of this process, if it is being managed by the ETB Sector as those organisations are currently operating.

The ETBI also has issues with respect to financial transparency. For example, when the Public Accounts Committee (PAC) asked the ETBI to attend meetings on the use of public funds across the education system, the ETBI did not consider itself to be accountable to the Committee. 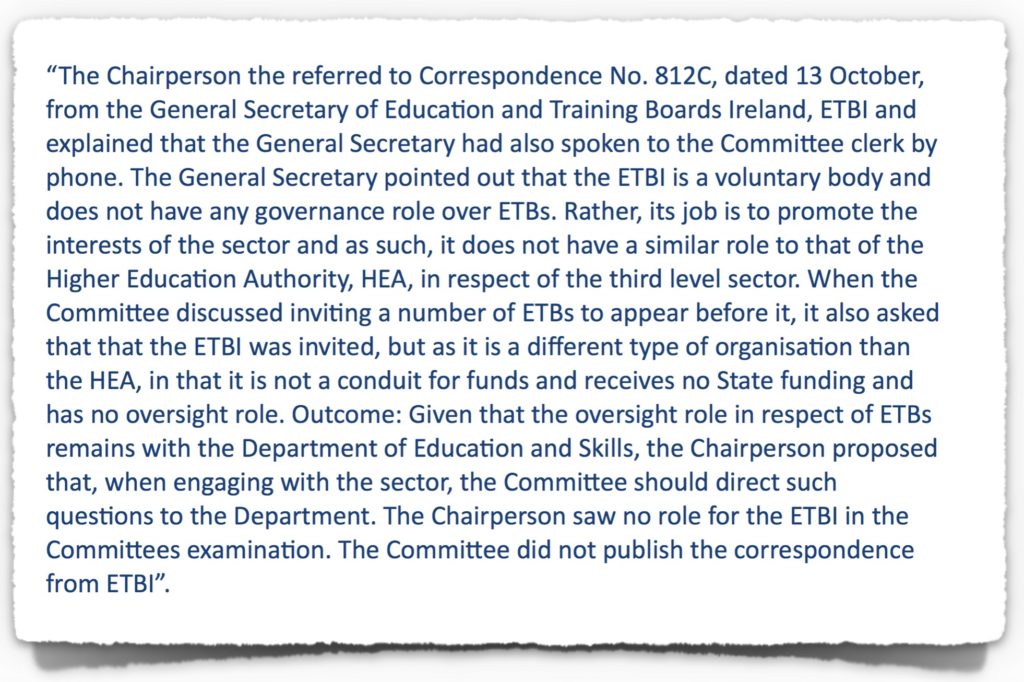 It is also worth noting that with respect to the transcript above, the PAC was misinformed when they stated that the ETBI received no State funding. The ETBI receives funding of €168,650 every year directly from the Department of Education and Skills. Furthermore, any revenue that the ETBI collects from individual ETBs as statutory authorities is funding from a public body.

How ETB Schools Religiously Discriminate without Public Transparency or Accountability

It covers the following areas of concern:

Atheist Ireland would like to reiterate our sincere gratitude to all those who made such generous donations to our crowd-funding appeal.

Our work on the ETB Sector has already contributed to the recent Directive from the Minister for Education and Skills, which requires ETB second level schools to make religion an optional subject with timetabled alternatives in the curriculum in all schools under ETB patronage.

The many people who support Atheist Ireland, including donors and volunteer supporters, can be proud of their contribution in this regard. We believe that our ongoing lobbying activities will achieve further successes.