Educate Together is right to express concern about the ETBs’ conflict of interest in the divestment process announced recently by the Minister for Education Richard Bruton. The ETBs (Education & Training Boards), who are managing the process, will also be applying to be patron of these schools.

Educate Together states that:

“survey results will form the basis of discussions with the most prevalent patron/landowner in the area (the Catholic Bishop in most cases) concerning the transfer of patronage of an existing school to meet that demand.” In other words, the plan, as it has been outlined today, gives Catholic Bishops the final say in which schools they transfer and what type of new school will emerge.

In an article in the Irish Examiner in January, Educate Together’s Paul Rowe stated that:

“The proposed plan seems to be designed to facilitate the handover of religious schools to ETB-run schools in return for payment.”

The Divestment plan as outlined by the Department of Education in January 2018 States that:-

ETBI and Catholic Church are both democratically unaccountable

Atheist Ireland has found that the ETBI, ETBs, and their Community National Schools, behave collectively like a secret society. Despite the assurances of the Minister, we doubt that the process will be transparent. The ETBI and ETBs are doing everything to ensure that the flow of information is carefully managed.

It is already clear that some Community National Schools and ETBs are in cahoots with the Catholic Church with regard to the process, and that the Catholic Church and some ETBs are hostile to Educate Together. It seems to us like a carefully managed process that appears to be impartial, but, behind the scenes, decisions have already been made that would see Educate Together lose out.

Emails between Cork ETB and the Catholic Church

Atheist Ireland obtained this information under Freedom of Information from Cork Education and Training Board. Ted Owens is the CEO of Cork ETB, and the Very Rev. Canon Tom Deenihan is a representative of the Diocese of Cork & Ross. 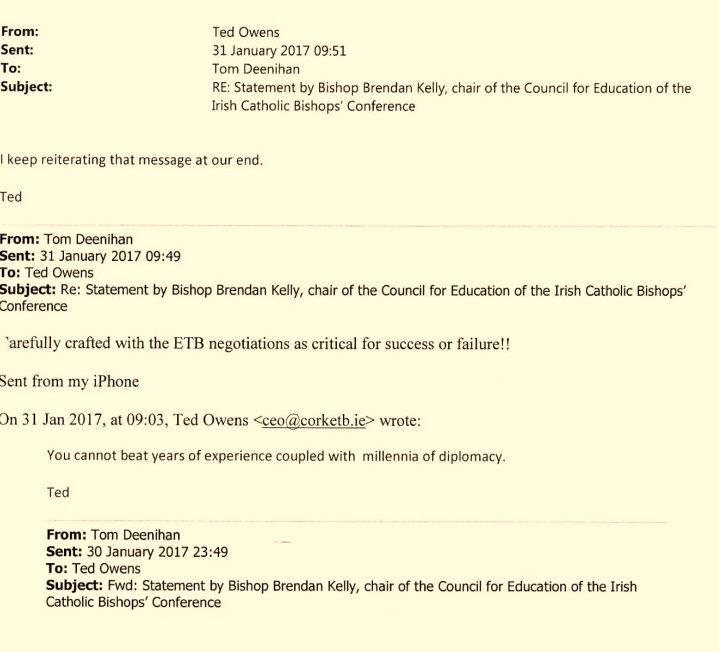 Unaccountable meetings between ETBI and the Catholic Church

We also know that the ETBI has been meeting with the Catholic Church regarding the divestment process. What was discussed and what decisions were made will not be made public, because neither of these organisations comes under the FOI Act.

The ETBI is a private organisation, and so is the Catholic Church. They are heavily involved in discussions and decisions over the divestment process, but the public cannot gain access to information using the FOI Act. Where is the transparency in that?

In addition, the ETBI and the Catholic Church agreed at a meeting in February 2016 to

“after the new government is formed to meet again about the reconfiguration process for National Schools (Divestment)”.

Two private bodies are meeting about the reconfiguration process and the public cannot get access to that information, because both are private bodies. Neither of these organisations is subject to Freedom of Information legislation or any form of public democratic accountability.

There is no way for anyone to find out what joint policies and strategies they have agreed together, but in practice the ETBI can issue direct instructions to ETB schools and Community National Schools. 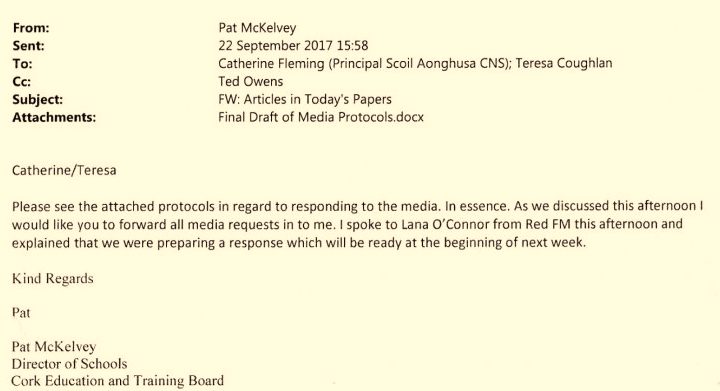 So we have a top-down policy from the ETBs to Community National Schools, announcing a media Protocol put together by a private organisation, the ETBI, about a process which the ETBI and at least some ETBs are already privately discussing with the Catholic Church.

How can we even begin to trust this divestment process when all this control and secrecy is in place? Educate Together is correct this is not an impartial process.