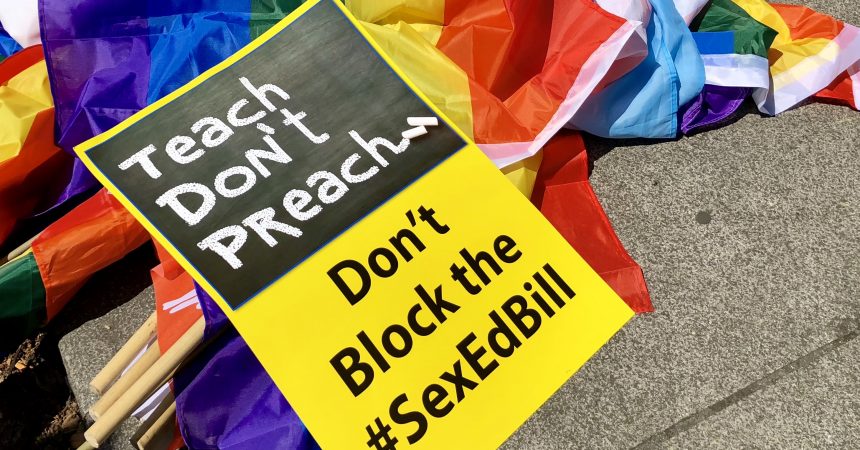 In this Republic successive governments have put the rights of religious bodies over the rights of children and their parents. It seems at this stage that nothing is going to change, as this government will not give support to Solidarity’s Objective Sex Education Bill.

This is not just about the content of the RSE curriculum, but about how it is delivered to students in schools. There is no point in reviewing the RSE curriculum if the Education Act 1998 is not also amended to ensure that schools deliver RSE in an objective, critical and pluralistic manner.

School is the new Church

It never ceases to amaze us how these schools get away with claiming that they are inclusive.

The Minister for Education Richard Bruton has in the past recommended the Catholic Church Guidelines for the inclusion of other faiths in Catholic schools.

The author of these Catholic Guidelines, Aiveen Mullally, said recently at the JMB Annual Conference.

The right of children to objective sex education has collided with the reality of publicly funded Catholic missionary schools.

Rights must be vindicated in practice

In an article in the Irish Independent John Curtis, of the Joint Managerial Body (JMB) was quoted addressing the Oireachtas Education Committee:

“He said pupils were entitled to high-quality RSE education, but also defended the right of schools to do so in a way compatible with their ethos.”

Members of the Joint Managerial Body (JMB) include the Association of Management of Catholic Secondary Schools, members representing Protestant schools, CORI and the Irish Episcopal Conference. These groups put the rights of religious bodies over the rights of children, and campaign politically on those issues.  None of these bodies are registered with SIPO.

The JMB said that pupils were entitled to high-quality RSE education. The Minister for Education, Richard Bruton recently acknowledged in the Dail that young people have a right to get factual information about sexual matters.

But if a right can only be vindicated by being delivered through an ethos that is incompatible with the right, then there is no right in practice.

It seems that the deference that the State has shown towards religious bodies will continue, despite the fact that there is nothing that supports the view that in balancing rights, that religious bodies should take precedence over children and their parents in publicly funded schools.

In 1995 the Constitutional Review Group Report stated that if a school accepts state funding it must be prepared to accept that this aid is not given unconditionally. They also raised the issue of Article 42.3.1 of the Constitution which the State constantly ignores.

“Accordingly, if a school under the control of a religious denomination accepts State funding, it must be prepared to accept that this aid is not given unconditionally. Requirements that the school must be prepared in principle to accept pupils from denominations other than its own and to have separate secular and religious instruction are not unreasonable or unfair.

ii) if Article 44.2.4 did not provide these safeguards, the State might well be in breach of its international obligations, inasmuch as it might mean that a significant number of children of minority religions (or those with no religion) might be coerced by force of circumstances to attend a school which did not cater for their particular religious views or their conscientious objections. If this were to occur, it would also mean that the State would be in breach of its obligations under Article 42.3.1”

It seems that this Government will again defer to the Catholic Church to ensure that they continue their mission to evangelise children from all backgrounds in schools. They are not prepared to put in place legal conditions to ensure that the rights of children to objective RSE are guaranteed and protected.

Religious bodies could continue to deliver Catholic sex education in the religion class. Balancing rights in this manner would ensure that children can access their rights, while religious bodies can continue to deliver RSE through their ethos. Unfortunately, balancing rights in this manner clashes with the mission of publicly funded schools to evangelise.

This Government needs to protect and guarantee the rights of children to objective RSE, instead of supporting the view that a review of the RSE curriculum is all that is needed. It is time for this government to put children first.