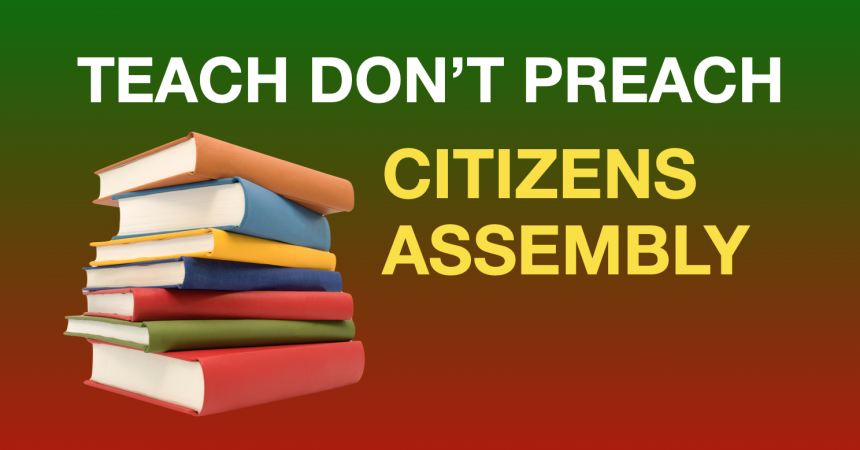 The Labour Party has recently proposed that we should have a new Citizens’ Assembly to tackle the Constitutional issues surrounding our education system. They have not identified the particular Articles in the Constitution that we would need to look at.

Atheist Ireland has consistently argued that the Constitution has failed to protect minorities, and that the deference that the state has for the Catholic Church has resulted in the undermining of the rights of minorities in the education system.

Along with the Catholic Church, Religion teachers, the Irish Centre for Religious Education (Mater Dei Institute)/DCU and the Teachers Union of Ireland, have no issue with this abuse of minority rights. They are actively lobbying to continue this evangelisation.

If a Citizens’ Assembly on religion in Irish schools does take place, Article 44.2.4 will surely come under a serious amount of scrutiny, as it was meant to protect minorities but it has failed. Atheist Ireland will take our conscientious objections to the evangelisation of our children in publicly funded schools to such a Citizens’ Assembly.

In 1995 the Constitutional Review Group believed that our Constitution protected minorities in our education system. They identified Article 44.2.4 as ensuring that protection and they recommended no change to it for that reason.

Article 44.2.4 sanctions State funding of denominational education. However, that funding includes conditions.  Those conditions are the reason why the Constitutional Review Group Report believed that minorities were protected in the education system.

Legislation providing State aid for schools shall not discriminate between schools under the management of different religious denominations, nor be such as to affect prejudicially the right of any child to attend a school receiving public money without attending religious instruction at that school.

The reason for the failure of our education system to protect minorities is that, since the Constitutional Review Group Report in 1995, the state put in place exemptions to our equality laws and ceded control in the Education Act to Patron bodies (mainly religious).

In other words, this Republic sanctions religious discrimination, and the evangelisation of minorities, in order that the religious majority can have access to a full Catholic education for their children in publicly funded schools.

The State enables the Catholic Church to evangelise minorities

On the ground, the practical application of those Constitutional conditions for funding has meant that minorities have suffered religious discrimination in accessing the education system, and their children are evangelised when they do gain access to their only local publicly funded school.

The State enables the Catholic Church to evangelise minorities in the education system through religious education, they have failed in their positive obligation to protect and respect the right of parents to ensure that the teaching of their children is in conformity with their convictions.

The State has undermined the 1995 Constitutional Review Group

In 1995 the Constitutional Review Group recommended no change to Article 44.2.4, as they believed that it protected minorities who had no choice but to attend state-funded denominational schools. They also believed that amending it would undermine our international human rights obligations. They said that:-

Accordingly, if a school under the control of a religious denomination accepts State funding, it must be prepared to accept that this aid is not given unconditionally. Requirements that the school must be prepared in principle to accept pupils from denominations other than its own and to have separate secular and religious instruction are not unreasonable or unfair.

Unfortunately, the opposite seems to have happened. Article 44.2.4 is now used to undermine the rights of minorities and breach their human rights. Not only has it failed to protect minorities, but Church and State are now using it to ensure the evangelisation of those minorities.

The negative aspect of the right to freedom of religion and belief is recognised, with the right to opt out, but that opt-out is not granted without religious discrimination. In addition, it is practically impossible to avail of the opt-out when religious education is integrated into the State curriculum and the state actually promotes this.

The Constitutional Review Group stated that:

“If Article 44.2.4° did not provide these safeguards, the State might well be in breach of its international obligations, inasmuch as it might mean that a significant number of children of minority religions (or those with no religion) might be coerced by force of circumstances to attend a school which did not cater for their particular religious views or their conscientious objections. If this were to occur, it would also mean that the State would be in breach of its obligations under Article 42.3.1°”

“Many of these difficulties are attributable to the fact that, unlike other countries, there is not a parallel system of non-denominational schools organised by the State which would cater for the interests of minorities in the examples already described. If such a system were in place, one major objection to any amendment of Article 44.2.4° would be removed and the way would be clear for State funding of denominational education per se (that is, integrated curriculum, preference for the admission of co-religionists etc). It would, however, be unrealistic to expect the State to provide such a system and, indeed, it could be wasteful of scarce resources were this to be done.”

The Constitutional Review Group obviously saw the conditions for funding denominational schools in Article 44.2.4 as protecting the rights of minorities. But now, not only has Article 44.2.4 failed to protect minorities, it is being used to undermine their right to opt their children out of religion in schools.

Religious Education is another matter. They don’t see Article 44.2.4 as protecting minorities from religious education. But the purpose of Religious Education (unless it is genuinely objective, critical and pluralistic) is to influence students into a religious way of life. Influencing children from non-religious or secular backgrounds into a religious way of life is evangelising them and disrespecting the rights of their parents.

The very purpose of integrating religion into the curriculum, and the State Religious Education Course at second level, is to influence all children. No restriction has ever been put in place by the State that would ensure that children from minorities are not evangelised in publicly funded schools. In fact, the opposite has happened the State now actively seeks to ensure that all children are evangelised so that they become good and caring citizens.

Church and State don’t see Article 44.2.4 as protecting minorities from evangelisation, which they refer to as religious education. They have never looked at their obligation to respect all parents’  convictions under Article 42.1 of the Constitution, or their obligation to not oblige parents to send their children to schools against their conscience in Article 42.3.1.

They totally ignore their human rights obligations. They believe that the Constitutional obligation to ensure all children have a basic moral education (Article 42.3.2) means that they can discharge that obligation through religion, even though minorities reject that on conscientious grounds.

What are our international human rights obligations?

On the other hand, the UN and European Court have moved to define legally what needs to be done to ensure respect for the convictions of parents and children in the education system. Case after case at the European Court outlines the basic general principle in relation to teaching religion.

The Recommendations from the UN consistently speak of protecting minority rights and ensuring equality. As far back as 2008 the UN referred to the right of children from a secular background to access a neutral and objective education. Ten years later, the State has still failed to act.

Ultimately, the State has failed to protect the rights of  minorities in the education system, because it seeks to promote good citizenship through religion. This means that Article 44.2.4 has failed, despite the fact that the Constitutional Review Group recommended no change to it as they believed it would protect minorities.

The State now privileges religion in the education system

The State now privileges religion in our schools. It seeks to develop knowledge, understanding, skills, attitudes and values of all students through religion. Dialogue within that framework means what Archbishop Diarmuid Martin refers to as the New Evangelisation.

“Our evangelization must open out to them and address the challenges they face in their search for truth and meaning.”

“Pope Francis has taken this evangelisation through dialogue one step further.”

This means that the State has decided that evangelising the children of minorities into religion in the education system is in the common good. Despite a culture that enabled the abuse of children, Magdalene Laundries, Mother and Baby homes, Industrial Homes and promoting discrimination and the abuse of our rights, our Republic still believes in evangelising minorities, and actively supports the Catholic Church in the New Evangelisation.

Atheist Ireland will continue to campaign to change this. We hope that the tide is turning, and we can look forward to a Republic that respects and protects all children and their parents in the education system.

The three types of religious education in Irish schools