There is a serious lack of accountability in this country. Our State-run Education and Training Boards (ETBs), and their umbrella body ETB Ireland (ETBI), can make agreements with the Catholic Bishops about our State-run Community National Schools, and the public cannot get access to records in relation to that agreement.

The ethos of these State-run schools has developed in, and into, a climate of secrecy. This is evident from a letter that Atheist Ireland obtained, under the Freedom of Information Act,  dated January 2017, from Bishop Brendan Kelly, Chair of the Council for Education of the Irish Episcopal Conference, to the then General Secretary of ETBI.

This letter shows that ETBI had been seeking approval from the Catholic Bishops in relation to the religious education curriculum, the Goodness Me Goodness You course (GMGY), and sacramental preparation, in ETB Community National Schools at primary level. See letter below.

People who the Bishops were engaging with

The letter refers to the Bishops engaging with a Mr. Conboy and a Dr. Keyes. It states that:

“We appreciate the good working relations that exist at a local level with the ETB’s. We also appreciate the engagement of Mr. Conboy and Dr. Keyes. We would hope that this engagement will continue and that further progress can be achieved so that we could be in a position to recommend the approval of the ETBI proposals as being appropriate for Sacramental education.”

Mr. Conboy is the Primary support officer for the ETBI. His primary role is in the support and development of the Community National School model. Mr. Conboy is currently on secondment from his role as principal of Citywest & Saggart CNS. He gets paid by the State, and according to the ETBI his role is:

“He provides support and advice to ETBI and individual ETBs in relation to the CNS model. He is also building an awareness raising structure for the CNS model that explains and promotes the unique ethos and educational philosophy underpinning the model. He also works closely with designated senior staff in ETBs in supporting the current CNS schools through the provision of CPD and advice.”

Dr. Keyes is now CEO of Kildare and Wicklow ETB. At that time she was Education Officer with Dublin and Dun Laoghaire ETB.

ETBI is a private body, not accountable under FOI

Atheist Ireland sought, under FOI, documents in relation to the Community National Schools from the ETBI.

We were not able to get access to any documents, because the Office of the Information Commissioner found that the ETBI is a private body, and does not come under the FOI Act. You can access that Decision here.

The ETBI also have a Media Protocol ETB in place, which means that all queries go through them. This kind of protocol is unheard of in the education system.

What we are left with is that the State ETBs, through the ETBI (a private body), are engaging with the Catholic Bishops (another private body) on religion, the GMGY course and sacramental preparation in public schools, and there are no records available.

There is a duty on the ETBs to release in the public interest records relating to the school system.

We know an agreement has been reached between the ETBs and the Catholic Bishops, but there are no records of the meetings and the decisions taken that led to that agreement.

Nor is there any record of exactly what each party understands has been agreed, although the letter from Bishop Kelly does not talk about reaching agreement, but talks about the Bishops ‘approving’ what the ETBs are proposing to do in public schools.

Atheist Ireland will continue to seek to find out what is happening behind these decisions. 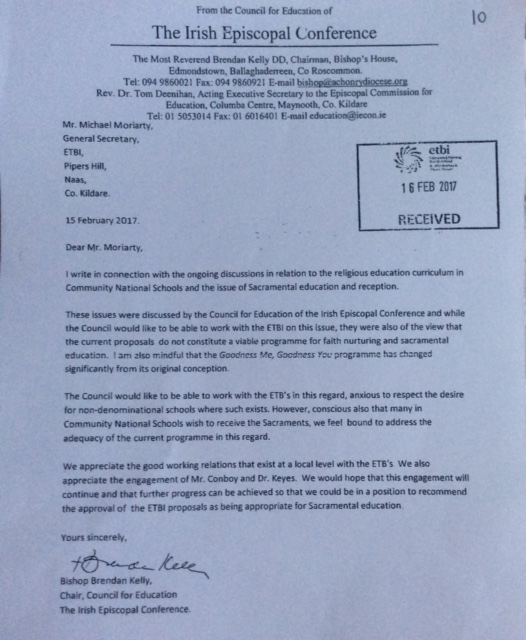 Campaign to Separate Church and State v Minister for Education 1995