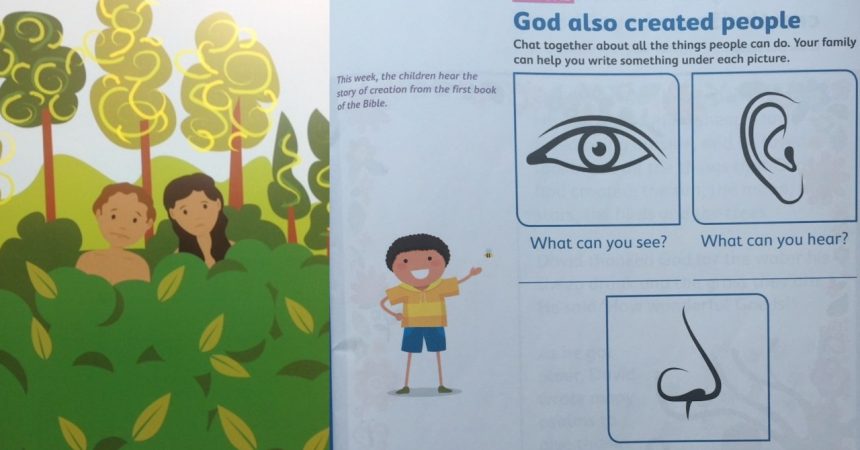 While the Roman Catholic Church is broadly supportive of the Theory of Evolution by Natural Selection, their formal doctrine continues to insist on “human exceptionalism”. That is, the Church requires that some dogmatic qualifications are applied to the science, when it comes to human evolution. The Catholic Church teaches that humans evolved from a single couple, Adam and Eve, rather than a broad population of ancestors.

The vast majority of schools in Ireland have a Catholic ethos which means that this teaching can be integrated into the State curriculum.  For example, the Religious Education Department within St Patrick’s Teacher Training College in Drumcondra, made the following submission on the Science Curriculum, to the Forum on Patronage and Pluralism:

“Religious Education will integrate with the following strands of the Science Curriculum … Plants and animals: exploring God’s creation.”

The learning outcomes in the GMGY course in Community National Schools require children to respect this ‘belief’ notwithstanding the fact that it is not scientifically sound and many parents think that it is nonsense.

Section 15.2(b) of the Education Act 1998, obliges the Board of Management of all schools to:-

“uphold, and be accountable to the patron for so upholding, the characteristic spirit of the school”.

This legal requirement to uphold the Characteristic spirit is defined by the patron of the school. In the case of Catholic schools, we know what this means. Where Catholic doctrine on creation conflicts with contemporary science (for example, Humani Generis cannot possibly be reconciled with contemporary evolutionary biology) then dogma wins.

The contemporary Roman Catholic teaching on Evolution was described in 1950, within a Papal Encyclical called Humani Generis. In this document, Pope Pius XII defined the Church position as follows:

“When, however, there is question of another conjectural opinion, namely polygenism, the children of the Church by no means enjoy such liberty. For the faithful cannot embrace that opinion which maintains that either after Adam there existed on this earth true men who did not take their origin through natural generation from him as from the first parent of all, or that Adam represents a certain number of first parents. Now it is no way apparent how such an opinion can be reconciled with that which the sources of revealed truth and the documents of the Teaching Authority of the Church propose with regard to original sin, which proceeds from a sin actually committed by an individual Adam and which through generation is passed on to all and is in everyone as his own.”

In this paragraph, Pope Pius XII describes both where the Roman Catholic Church insists that the science is wrong and also describes why the Church requires that this must be the case. The reason why the Church insists that the science is wrong, is in order to preserve the doctrine of Original Sin. This doctrine requires that all humans throughout history, were directly descended from an actual historical character called Adam, who was responsible for The Fall of Man as an actual historic event.

Unfortunately for the Church, the consensus among contemporary evolutionary biologists in this area is independently supported by overwhelming evidence from many different disciplines. These include the study of genetic diversity, archaeology, anthropology, evolutionary anatomy and population genetics.

There are various estimates of what the minimum human population was during historic population bottlenecks. The lower end of these estimates shows that there could not at any point have been fewer than 10,000 human individuals. So contemporary science definitively rules out the idea that at some point there were only 2 humans, Adam and Eve.

Consequently, whichever human male throughout history the Church may call Adam, there were certainly other humans who lived after Adam who were not directly descended from him. In other words, the human exceptionalism described in Humani Generis cannot be reconciled with contemporary evolutionary biology.

In the Irish Education system, objective scientific truths must be made bend into whatever shape a particular religious ethos requires.  Our education system would be better off if science was not diluted by religious dogma.