The sums paid by any one school range from €4,162 paid by Colaiste Dun Iascaigh in Cahir to the Mir Retreat Team in Mallow for Retreats, down to €90 paid by Borrisokane Community College in Tipperary to Mount Melleray for a Youth Day.

Some of the services are overtly evangelising in nature, such as the National Evangelisation Team Ministries, and the Meitheal programme actually trains older students to evangelise younger students.

It is entirely inappropriate that ETB schools, that are run by the State, and that are portrayed as the alternative to denominational schools with private religious patrons, are spending State money on these religious services.

The nature of the projects suggests that these are not the only payments made to these entities during 2017. However, other ETB schools either did not have records for any payments, or else an ETB charged what we considered to be exorbitant fees to access the records. The entities would of course also have got payments from denominational schools.

Kildare and Leighlin Diocese was paid €4,320 for Meitheal Programme (by 4 schools)

In May 2017, Portlaoise College paid €1,700 to the Kildare and Leighlin Diocese for providing the Meitheal Programme. There is no mention of parents contributing to this payment.

These are just four schools for which we have got invoices related to 2017. The Kildare and Leighlin Diocese website says that in June 2015, 23 schools from the Diocese participated in the programme. It says that the students are trained as Meitheal teams. They then work with their incoming 1st years from August to March.

It says that “Meitheal is a leadership programme which operates in secondary schools in the Kildare and Leighlin diocese… The students, leaders and others educate each other through leadership, taking action, liturgy, reflection and evaluation… This course will give the students all the skills they will need to work as a Meitheal team in their school… The Meitheal programme is the start of a process, the development of young people (who) would later become leaders in their own parish and community.” In September, October, and November 2017, Colaiste Dun Iascaigh in Cahir paid €4,162 in four invoices to the Mir Retreat Team in Mallow for Retreats. One of the four invoices is reproduced below.

MIR Retreat Centre was set up by theologian Declan Browne and his wife Annmarie, as a response to a vision they have for the Catholic Church, a vision that all people will come to know the love of Christ for them personally. Before doing this Declan spent 8 years within the order of Missionaries of the Sacred Heart MSCs. Limerick Diocese was paid €2,875 for Anois Programme (by 2 schools)

The Limerick Diocese Youth Ministry webpage says that: “Anois is a leadership training programme run in conjunction with secondary schools for students in transition/fifth year. It has been running in the diocese for over 20 years.”

In an article in the Irish Catholic about the Anois programme, a participant says: “The days also started and ended with prayer. It was not like the prayer we are used to at Mass. Nice stories were chosen and verses read and we got to play our part… Morning prayer always finished with an action song or fun liturgical dancing to wake us up and night prayer always finished with a bed time story that had a positive message.” 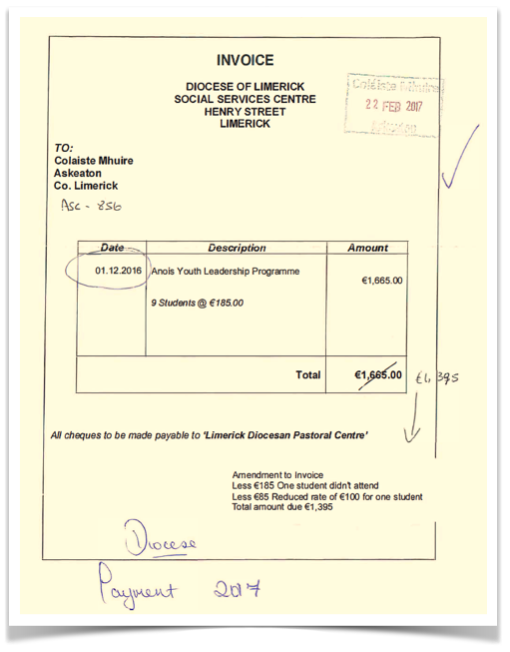 In April 2017, Kilkenny Community School gave €1,200 to the Ossary Diocese for the Lourdes Invalid Fund.

Foundation in Christ Ministries was paid €650 for Retreats

In May 2017, Colaiste na Coiribe in Galway paid €650 to Foundation in Christ Ministries for schools retreats for 65 Transition Year students at An Tobar Nua.

An Tobar Nua has been working with Irish secondary schools for over ten years through day retreats. The themes that it covers include Romance Without Regret, Friendship with God, The Price of Pornography, and Why Jesus? 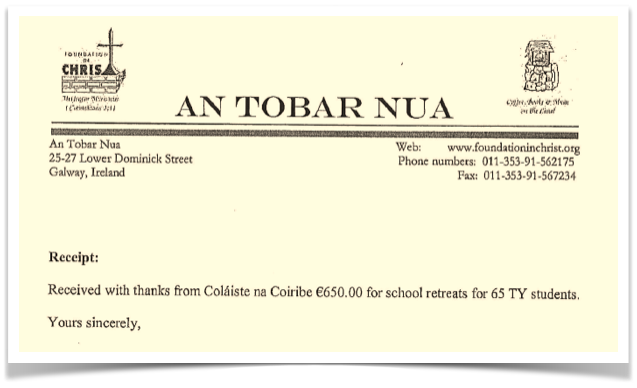 National Evangelisation Team Ministries was paid €500 for a Retreat

In March 2017, Abbey Vocational School in Donegal paid €500 to NET Ministries for organising a Retreat titled “Steppin’ Up — Leadership”. The day was focused on Christian/Catholic values and teachings, and talks focused on Christian leadership and how it can be implemented today, how Jesus and Peter were great leaders, and an opportunity for prayer.

The NET Ministries website says that: “NET stands for National Evangelisation Teams. We are missionaries who share Jesus’ gospel message with young people. Every year, we recruit and train young adults to evangelise to over 20,000 youth in churches, schools, and parishes across Ireland.”

“NET Ministries is a Catholic organisation with Catholic missionaries.  The chair of the board of directors is Retired Bishop Philip Boyce of the Raphoe Diocese. As part of our missionaries’ lifestyle, they regularly attend Mass, Eucharistic Adoration and Reconciliation. When priests are available, we facilitate the Sacrament of Reconciliation on our retreat days”

NET also offers to come to schools and give Religious Education classes for no charge. One post primary school in Louth meath ETB sais that “NET Ministries visisted our school on six occasions during 2017, taking place at lunchtime… No services were invoiced, all visits were in a voluntary capacity, and attendance was completely voluntary/optional.” 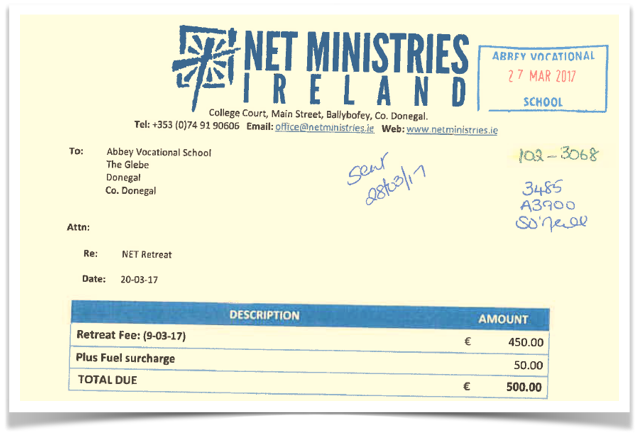 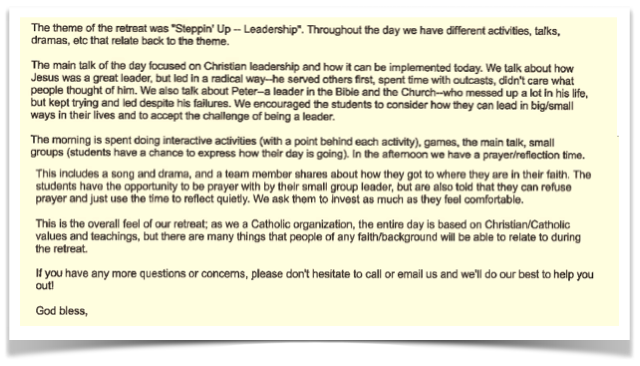 Redemptorists in Athenry were paid €440 for a Retreat

In November 2017, Galway Community College paid €440 to the Redemptorists in Athenry for a 6th year School retreat.

The Esker Redemptorists Website says that the Esker Experience offers students “the chance to discover (again?) the joy of who they truly are, as seen through the understanding eyes and wonderful welcome of Jesus Christ. ‘We cannot keep such joy to ourselves!’”

The themes offered during 6th-year retreats include “Reflection on our past, present and future, Life as a journey, Stereotypes (Male/Female), Change and Choice, Dealing with Stress, Moving On, Vocation, the Mystery/Wonder of God in all of life.” Redemptorists in Cork were paid €364 for Scala Leadership Training

In September 2017, Colaiste Phobail Bheanntrai in Cork paid €364 to Redemptorists Cork for Leadership Training for 26 people in Scala Retreat and Conference Centre in Cork.

The Scala website says that: “Scala is home to a community of Redemptorist Missionaries, who are responsible for and support Scala’s outreach to young people. They share community life and ministry with lay co-workers in order to promote a collaborative model of church. Together with their co-workers, Redemptorists have made ministry to young people a priority.” Knock Shrine was paid €330 for a Youth Ministry Retreat

In November 2017, Colaiste Cholmcille in Galway paid €330 to Cnoc Mhuire (Hill of Mary) for a Youth Ministry Retreat at Knock Shrine.

The Knock Shrine Youth Ministry webpage says: “The Youth Ministry team in Knock seeks to proclaim the Kingdom of God and to make known the Good News of Christ more fully through worship, service and witness. They aim to give the young people who visit Knock Shrine a personal experience of Jesus through the Sacraments. They do this by celebrating the Sacraments, preaching the Gospel, and by giving witness to the living presence of Jesus in our world.” 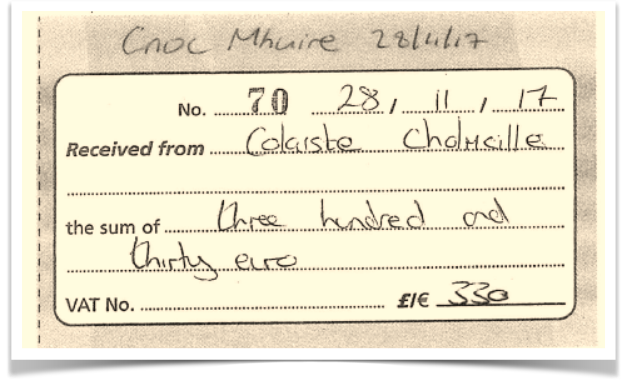 De La Salle Pastoral Centre was paid €285 for a Retreat

In September 2017, Borrisokane Community College in Tipperary paid €285 to the De La Salle Pastoral Centre in Castletown, Portlaoise for a Retreat.

The De La Salle Pastoral Centre website says of its Retreats: “Your faith should be your constant light and guide, and a beacon for those in your care – St. John Baptiste De La Salle.” 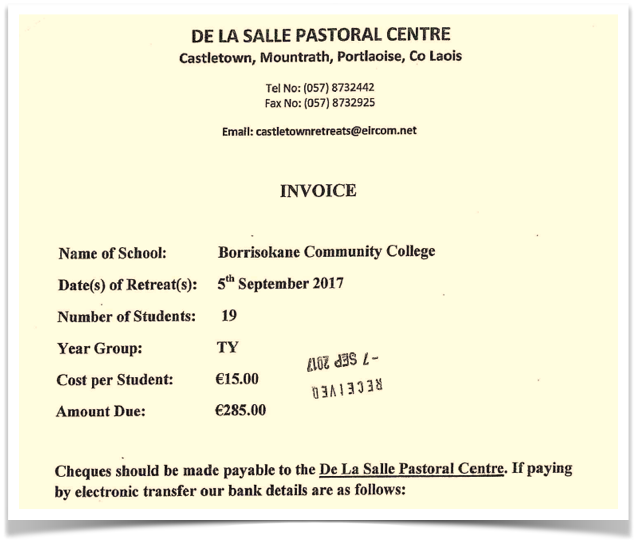 Archdiocese of Dublin was paid €200 for Emmanuel Concerts

In October 2017, Deansrath Community College in Clondalkin paid the Archdiocese of Dublin Liturgical Resource Centre €200 for 20 students to participate in Emmanuel 2018, a series of concerts at the Helix Centre in Dublin.

This fee for this school alone was for 20 students. The Catholic News wrote that in 2018: “Almost two and a half thousand teenagers from seventy different schools throughout Dublin will take to the stage in DCU’s Helix concert hall to sing and play Church music.”

Catholic News also wrote that: “Emmanuel is a project of the Dublin Diocesan Liturgical Resource Centre and promotes the use of Sacred Music in Secondary schools. Before getting on stage each day the students participate in faith-based workshops, reflections rehearse hymns and play music… The students take the music and prayers they learn during the Emmanuel workshops and concerts, use, and adapt them in their own prayer services and liturgies in their school communities throughout the year.” 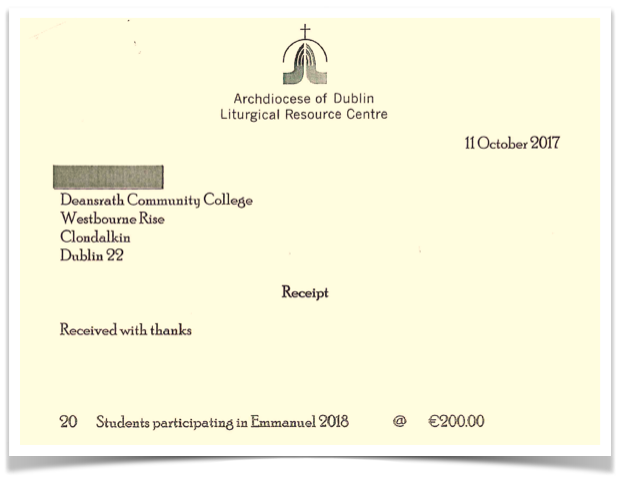 Mount Melleray was paid €90 for a Youth Day

In March 2017, Borrisokane Community College paid €90 to Mount Melleray for a Youth Day.

Over 300 students from all over Munster and further afield attended the Youth Day. The Diocese of Cloyne website says of the Day that: “First on the programme was a warm welcome from the local bishop, Bishop Cullinan (Bishop of Waterford and Lismore)… He then introduced us to Bishop Frank Caggiano from Bridgeport in the United States who gave us a deep and thought-provoking talk for an hour or so… We listened to the story of a young person who had had a deeply religious experience… After this, we took part in Eucharistic Adoration… We returned to the church for another reflection from Bishop Caggiano. After this, we finished up with the celebration of Mass…”

Diocese of Clogher Had a Summer Camp for €180 Promoted

In March 2017, Blayney College arranged for Clogher Don Oige, a youth ministry initiative of the Catholic Diocese of Clogher, to talk to 1st and 2nd years about attending Camp Don Oige, a Faith Summer Camp that charges €180 per participant.

The Camp involves: “Faith activities based around the themes of the parables, Journey, and Mary… Twice a day young people take part in prayer… The young people grow in faith by learning about the Feast of the Assumption, vibrant youth-led prayer services and singing action songs.”

Blayney College also offered to follow up with a text from the school to parents or guardians, because: “Sometimes a parent or guardian might not hear of it through their child, but if they get the information themselves, a bit of encouragement to the student often helps.” As well as payments by schools for Youth Ministry services, Moyne College in Mayo paid €4,410 to the Newman Institute in Ballina for room rental for some of its PLC courses during 2017. This building is a parochial centre in the Diocese of Killala.

ETBs From Whom We Got No Records Summary of ETB Payments for Diocesan Programmes During 2017 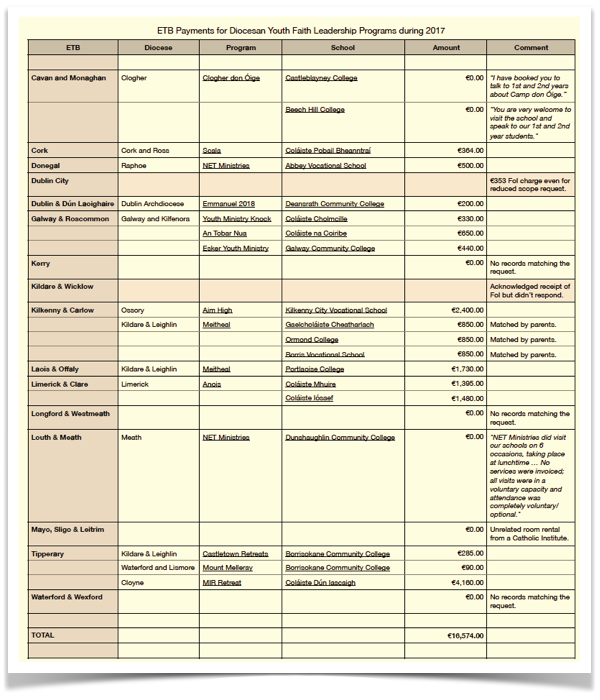