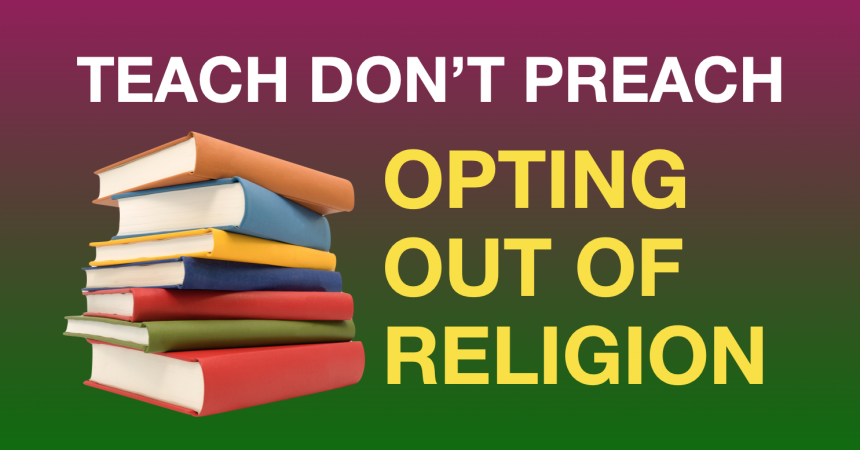 Ruth Coppinger TD has twice recently asked the Minister for Education Joe McHugh about the right of students to opt out of the NCCA Religious Education course at second level. The Minister has not directly addressed the right to opt out, saying merely that opting out “should not arise” because of proposed changes to the curriculum.

But parents have an absolute right to opt their children out of this course based on the Irish Constitution, whether or not other people think that doing so “should not arise”. They also have a wider right to opt out on the grounds of conscience under the Education Act, given the objectives of both the course now and the new course due to be introduced in September 2019.

None of this would be an issue if the situation was reversed, and if an NCCA course (National Council for Curriculum and Assessment) prioritised atheism the way that the current one prioritises religion. But because we grew up with the status quo, many people have a blind spot about how unreasonable it is for the State to prioritise either religion or atheism.

If an NCCA course contributed to the moral and spiritual development of all students through atheism, and developed knowledge, understanding, skills, attitudes and values to enable young people to come to an understanding of atheism and its relevance to life, relationships society and the wider world, it would be seen as indoctrinating students from religious families and disrespecting their religious convictions.

But the NCCA Religious Education course does the very opposite. Its main objectives are to contribute to the moral and spiritual development of all students through religion, and to develop knowledge, understanding, skills, attitudes and values to enable young people to come to an understanding of religion and its relevance to life, relationships society and the wider world.

The Minister for Education Joe McHugh would never fudge such an issue by telling religious families that it “should not arise” that they exercise their right to opt their children out of any curriculum course that contributed to their moral and spiritual education through atheism, and that taught their children about the relevance of atheism to their lives.

He would know instinctively that this was indoctrination. He would not ignore the Constitutional and Human Rights of religious families. He would not enable schools and teachers to coerce all students into the course.

Unfortunately, that is exactly what the Minister is doing to non-religious families at present. He is ignoring their right, in Section 30.2(e) of the Education Act, to opt out of any subject that is contrary to their conscience.

He is also ignoring their absolute right to opt out of the NCCA Religious Education course, which is in Article 44.2.4 of the Constitution. This right applies to any form of religious teaching (‘teagasc creideamh’ in the primary Irish text). It is not limited to classes that include faith formation, or to classes that are called ‘religious instruction’.

The Education Act refers repeatedly to the concept of ‘instruction’ and everywhere it does so, it uses the term to mean the teaching of a subject. Any religion class, whatever it is called and whatever it includes, is legally ‘religious instruction’ and you therefore have a right to opt out of it.

Last year the Department of Education reversed a directive to ETB schools to offer students who opted out of religion another subject, after lobbying by the Catholic Church, the ETBs, the TUI, and the NCCA.

But after that directive was issued, the Department confirmed to Atheist Ireland at a meeting that the Constitutional and Education Act right to opt out had not changed, and that students could still opt out of the NCCA Religious Education course. Yet now the Minister is failing to say this, instead saying that the opt-out “should not arise.”

If the State respected the inalienable rights of non-religious families under the Constitution, the issue of opting out of any religion class would not be an issue. We still have a long way to go to ensure that the practical application of our Constitutional right to opt out our children is guaranteed and enforced in all schools.