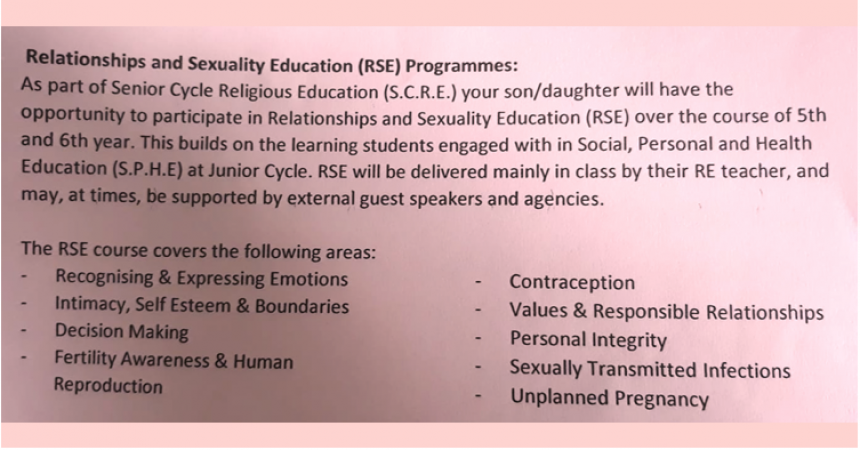 This is for fifth and sixth year students at second level, and the Religious Education course is not an exam subject. You can read the policy in the photo above.

Atheist Ireland will be incorporating this into the discussions that are having with ETBI Ireland.

Two years ago, we published FOI documents that showed that other ETB schools were paying the Catholic agency Accord to provide Sex Education courses which are informed by Catholic teachings.

Educate Together has also done this. Earlier this year, parents stopped Castleknock Educate Together school using Accord to deliver sex education courses. Accord almost lost its funding in 2018 because it would not offer its counselling services to same-sex couples.

That was shortly after Solidarity’s Objective Sex Education Bill was passed at first stage in the Dail. That Bill is currently delayed in the Oireachtas because of a procedural decision by the Government that is preventing it from being discussed further.

Last January, the Oireachtas Education Committee recommended, as Atheist Ireland asked it to, that the law must be changed to remove the role of ethos as a barrier to the objective and factual delivery of sex education curriculums.

This was the first time that an Oireachtas Committee had recognised that students have a right to an objective education for the State curriculum, even in denominational schools, outside of the patron’s religion or values programmes from which you can opt out.

This behaviour, whether by denominational schools, ETB schools, or Educate Together schools, is not consistent with the European Social Charter, the Circular Letter 0037 2010 from the Department of Education, or the Recommendation to Ireland from the UN Committee on the Rights of the Child.

Atheist Ireland will continue to campaign for factual and objective Sex Education for all students, that is not delivered through Religious Education or through the ethos of a school.