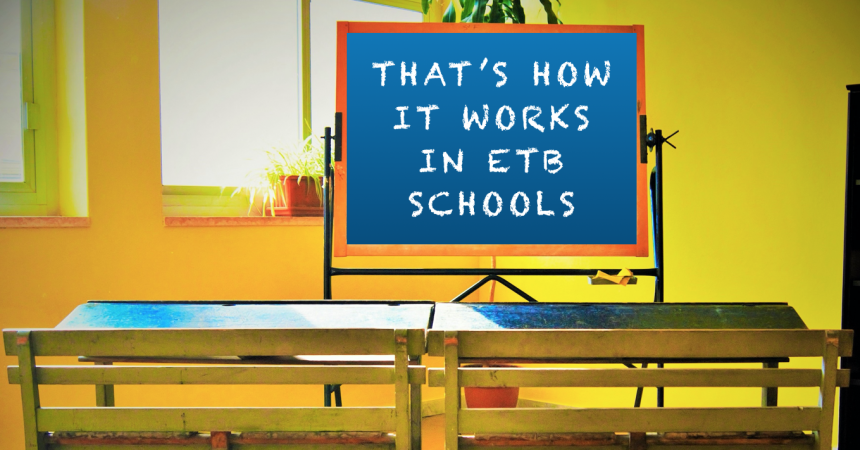 That’s how it works here – Religious discrimination in ETB schools

The research called ‘That’s how it works here’: The place of religion in publicly managed second-level schools in Ireland (by O. McCormack, J. O’Flaherty, J. Liston) published in October 2018 says that, “practices that were previously viewed as unproblematic now need to be questioned, challenged and changed”.

The findings of the study highlight the unquestioned position of Catholic practices within ETB schools and the religious discrimination against minorities that is such a part of how ETBs operate on the ground.

ETBs are legally obliged under the Irish Human Rights and Equality Commission Act 2014 to eliminate discrimination and protect human rights. Despite this obligation, they continue to disrespect the rights of minorities and discriminate on religious grounds.

The study states that:

“As public bodies, ETBs have responsibilities in respect of the ‘common good’. These include, for example, unifying a diverse population, preparing students to be citizens in democratic society, and accepting and reflecting a variety of ‘worldviews, social customs and behaviours’ (Peifer 2004, p. 2).

Publicly managed schools have particular responsibilities in respect of the constitutional commitments to freedom of conscience (Article 44.2.1), non-discrimination on the grounds of religious belief or non-belief (Article 44.2.3) and protecting the right not to attend religious instruction at school. Much of the practice reported here is a potential source of concern in respect of these responsibilities.”

An example of an ETB school that discriminates is Castleknock Community College in Dublin. The school claims that it demonstrates a clear commitment to the promotion of equality, respect and inclusion as communicated in policy documents. It also claims that its vision is to build a reputation for excellent practice in equality and diversity and to be recognised as an as inclusive college.

Religion is a core subject in Castleknock Community College. That means that the school does not offer students who opt-out on conscientious grounds another subject. The main aim of the NCCA Religious Education course is to teach all students about the relevance of religion to their lives and to respect beliefs. That is not objective, critical or pluralistic and this course is not up to human rights standards. Religious education like sex education is delivered through the ethos of the school.

The Department of Education has said that NCCA Religion Education is an optional subject (Circular 19/1999 and Circular 0062/2018). Despite this Castleknock Community College has decided to make religion a core subject and not offer another subject. This ETB school made this policy decision, and that decision discriminates against minorities who opt out of religion on conscientious grounds. That is not promoting equality, respect or inclusion.

In Papageorgiou and Others v Greece – 2019 the European Court stated:-

87. The Court considers that the current system of exemption of children from the religious education course is capable of placing an undue burden on parents with risk of exposure of sensitive aspects of their private life and that the potential for conflict is likely to deter them from making such a request, especially if they live in a small and religiously compact society, as is the case with the islands of Sifnos and Milos, where the risk of stigmatisation is much higher than in big cities.

The applicant parents asserted that they were actually deterred from making such a request not only for fear of revealing that they were not Orthodox Christians in an environment in which the great majority of the population owe allegiance to one particular religion (see Grzelak v. Poland, no. 7710/02, & 95, 15 June 2010), but also because, as they pointed out, there was no other course offered to exempted students and they were made to lose school hours just for their declared beliefs.”

You can see the Contract for Catholic Chaplains here.

“Faith teaching and practice are intrinsic to school chaplaincy. Accordingly, the Chaplain is a person of faith, a Priest, Religious or layperson of the relevant faith, committed to the teaching and values of Christ, acting on behalf of the Church and the school community while upholding the teaching and moral standards and practices of the Competent Religious Authority, together with the characteristic spirit and founding intention off the school.”

Obviously the position of Chaplain is not open to those of other faiths. How is that equality? The Chaplaincy service says that prayer and community worship are key elements in the faith development of students. How does the Chaplain even know the religion of students? Data Protection is simply ignored.

The school claims that the reason for asking the religion question is to ensure fair processing of all categories of the enrolment procedures. When did religion become a ‘category’ in the enrolment process of an ETB school that claims it promotes diversity, equality and inclusion.

The research commissioned by ETBI reflects the discrimination that is a feature of the majority of ETBs. Inclusion to them means that they will include you in the Catholic religion. Equality and respect means whatever they conclude fits into their mission to evangelise.

How can a five-year-old child undermine a school's religious ethos?