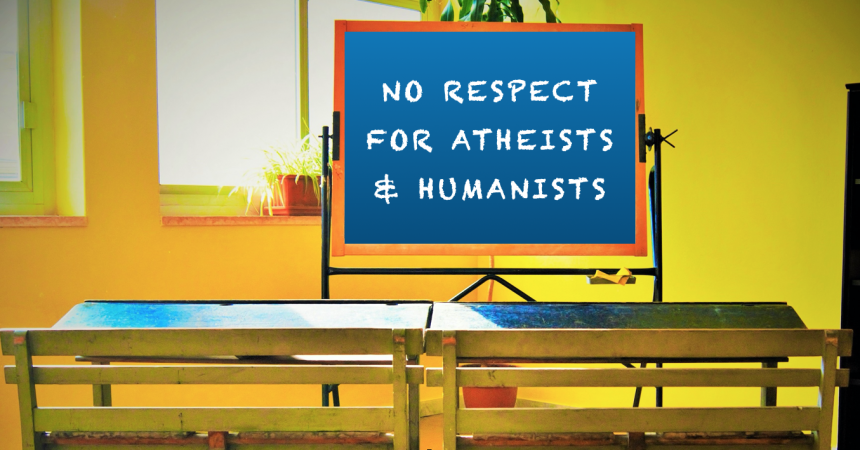 The state Religious Education course developed by the NCCA disrespects atheists and humanists.

The course was recently updated and introduced into second-level schools in September 2019. Despite superficial changes, the updated version is no better than the previous one.

It is not an objective course about religions, beliefs and ethics. It is not confined to teaching about religions and beliefs. The aim and rationale of the course are quite clear in stating this.

The European Court has defined what respect means in relation to the rights of parents in the education system. This is a General Principle of the court, they stated that:

“The verb “respect” means more than “acknowledge” or “take into account”. In addition to a primarily negative undertaking, it implies some positive obligation on the part of the State. The term “conviction”, taken on its own, is not synonymous with the words “opinions” and “ideas”. It denotes views that attain a certain level of cogency, seriousness, cohesion and importance.”(Folgero v Norway 29.06.07)

The UN uses the terms neutral and objective. The European Court has said that this right to respect is an absolute right and not to be balanced against the right of others.

If you examine the aim and rationale of the NCCA Religion course alongside the General Principles of the European Court and UN principles regarding the rights of parents, it becomes clear that the NCCA religion course disrespects atheists and humanists and breaches our human rights.

Under the Irish Constitution, atheists and humanists have the exact same rights as religious parents and the state is obliged to respect our convictions on the grounds of conscience.

The main Aim of the NCCA religion course at Junior Certificate level is to:

The Rationale for the course states that:-

“As students learn to live in an increasingly pluralistic world, Religious Education has a critical role to play in the curriculum in providing opportunities for students to consider the variety of religious beliefs found in Ireland and elsewhere, become aware of different understandings of the Divine, and examine other interpretations of life. It encourages respect and understanding of different beliefs, perspectives and ways of living, including both the religious and non-religious response to human experience.”

The Specification for the course defines the meaning of the words used. The words, values, consider and examine are defined as follows:

Consider – Reflect on the significance of something

Examine – enquire into/look closely at an argument or concept in a way that uncovers its origins, assumptions and relationships

Values –  motivating ideals or standards of behaviour; one’s judgement of what is important in life”.

The specification can be found here https://ncca.ie/media/3785/junior-cycle-religious-education-specification.pdf

The rationale for the course sees students reflecting on the significance of religions, and only looking closely at other interpretations of life.

The main aim of the course is to develop attitudes and values so that students will reflect on the significance of religion to their lives. Any teaching that motivates ideals or standards of behaviour while reflecting on the significance of religion to life disrespects the rights of atheists and humanists to ensure that the teaching of their children is in conformity with their convictions.

If the course said that its aim was to develop attitudes and values so that students will reflect on the significance of atheism and its relevance to life, relationships, society and the wider world then we would never hear the end of it until it was changed.

The course fails to even “acknowledge” that families with atheist convictions teach their children about the relevance and values of atheism and humanism to their lives, and that we don’t teach our children about the relevance of religion to their lives. Our convictions are more than “opinions” and “ideas” and we have the exact same rights as religious parents under the Constitution and Human Rights law.

The course also teaches our children about different understandings of the ‘Divine’ as if the existence of the ‘Divine’ was an uncontested fact. The ‘Divine’ is defined as “the various ways in which the world’s major religions refer to God/gods/the Transcendent.

People have a right to hold beliefs as that is part of the right to freedom of religion and belief and any objective course about religions and beliefs must teach this. However, teaching children to respect beliefs is formational and its purpose is to undermine the right to be openly critical about certain beliefs and campaign against them.

Many religious beliefs are harmful and individuals have the right to criticise these beliefs. Why does the state want to teach children to respect beliefs that their families see as harmful?

Atheist Ireland continues to lobby to ensure that the State respects these rights.

How a secular State protects us all