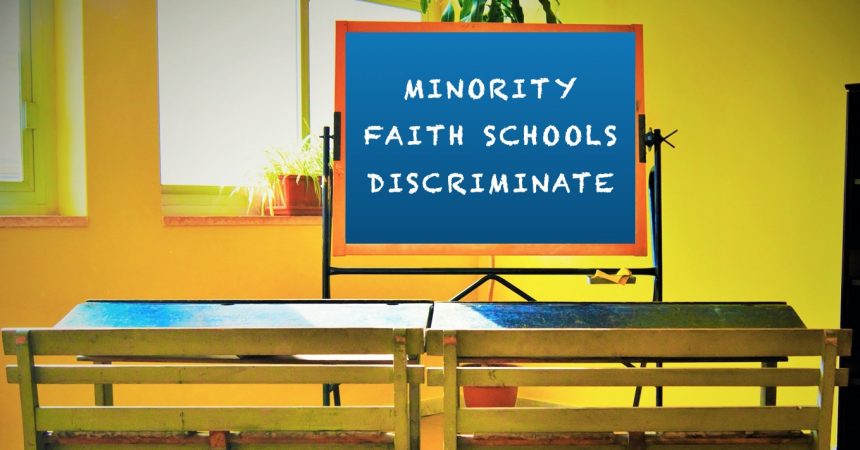 Religious discrimination in access to schools still exists. Minorities can still be refused access to their local school on religious grounds. Some publicly funded schools can still refuse access to children because they are not the right religion or have no religion or if they believe that your child will undermine their ethos.

The Education (Admission to Schools) Act 2018 only applies to primary schools with a Catholic ethos. This Act meant that publicly funded schools with a Catholic ethos at primary level cannot discriminate in access by giving preference to co-religionists. They can still refuse access if they think that your child will undermine their ethos, although they have to prove that.

The Education (Admission to Schools) Act 2018 only applies to primary schools. This means that all schools at second-level with a religious ethos can discriminate in access by giving preference to co-religionists or refuse access if they believe that your child will undermine their ethos.

Here are the figures for second-level schools.

The amendment states that:

When making an application for admission to a recognised primary school, an applicant may provide—

(b) any evidence that the applicant wishes to include to support the statement that the student in respect of whom the application relates is a member of a minority religion.

The figures for schools at primary level are:

The pressure on parents who want to send their child to a local publicly funded primary school with a Church of Ireland or Presbyterian ethos is immense. If you are not Christian then the likelihood of a getting a place for your child has decreased with the introduction of the Education (Admission to Schools) Act 2018 and the amendment to the Equal Status Act.

The right to attend any publicly funded school without attending relgious instruction under Article 44.2.4 of the Constitution has just been undermined again. Minority religious schools still cannot refuse access if the school is not oversubscribed. However, parents are now put in the position that if they want access to the school for their child then they must agree to a particular form of religious instruction or education for their child.

According to the last census:

And what of the nonreligious”

If you live near an Educate Together school then your child will get access there without religious discrimination.

The well-established minority Christians who have control over publicly funded schools get state privilege and can discriminate against other religious minorities (including other Christians) and the non-religious. Politicians may have thought it was a good idea to protect minority schools and their ethos, but they have just helped to institutionalise religious discrimination and undermine the Constitutional right to not attend religious instruction.

The State is protecting freedom of religion of particular minorities at the expense of the rights of other minorities. That is not a balance.

How do teachers in minority faith schools deal with their legal obligations? They must uphold the ethos of the patron of the school (Section 37 Employment Equality Act) while recognising that children from minority backgrounds are coerced to take religious instruction or education in order to gain access to the school. This puts them in an impossible situation.

Atheist Ireland is campaigning to remove religious discrimination in access to publicly funded schools. No family should be refused access to their local school because they are not the right religion or have no religion.