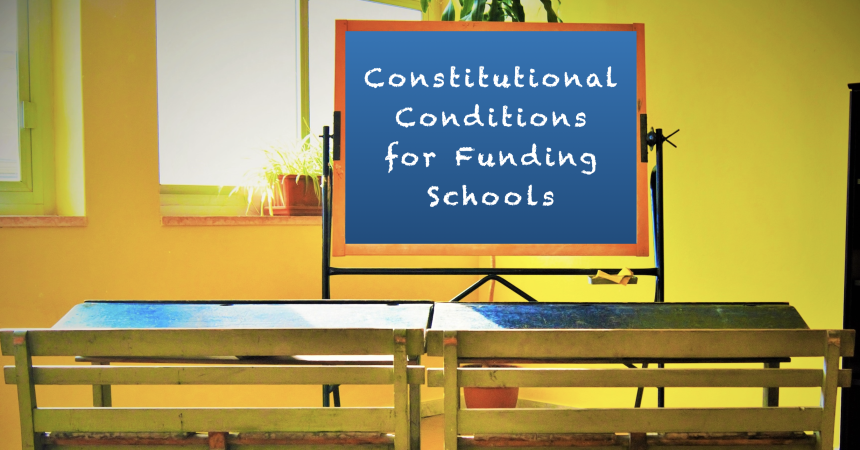 The Constitution says that the State can ‘endeavour’ to fund private religious schools as long as the rights of all parents are protected (Article 42.4).

Many people believe that they have an absolute Constitutional right to a Catholic education for their children without any conditions on state funding, that is simply not the case.

In the recent Burke case at the Supreme Court the court stated that:-

Article 42.4, in requiring the State to provide for “free primary education”, also places an endeavour, but only that, before the State “to supplement and give reasonable aid to private and corporate educational initiative” and “when the public good requires it” towards “other educational facilities or institutions”.

An overall saver in the constitutional text is that the State, in providing for free primary education and in endeavouring to assist post-primary education in various forms, have “due regard … for the rights of parents, especially in the matter of religious and moral formation.”

This provision reflects a concern for upholding parental authority; a foundational pillar of the Constitution that accords with Article 41 recognising the family as “the natural primary and fundamental unit group of” Irish society. Hence, society is built around the family.”

The Supreme Court outlined that the state was obliged to ‘endeavour’ and only that, to supplement and give reasonable aid to private and corporate educational initiative, while it must protect the Constitutional right of parents in relation to the religious and moral formation of their children, a foundational pillar of the Constitution.

This is not a matter of balancing rights within publicly funded schools, because these Constitutional rights are a condition of State funding. The State needs only ‘endeavour’ to fund these schools, and only if the Constitutional conditions in relation to the rights of parents and students are protected and guaranteed.

It is a great position to be in when you get to decide on how to administer the Constitutional conditions of the funding that you recieve from the State. This is where the power and control of the Catholic Church comes into its own, and where the State sits back and does nothing while private bodies administer the Constitutional rights of others according to their own mission.

The right to not attend religious instruction, and the right of parents in relation to the religious and moral formation of their children in publicly funded schools, have been undermined by the failure of the Department of Education to administer Constitutional rights.

There has been an excess of jurisdiction in the Department of Education in handing over the administration of fundamental Constitutional rights to schools, to administer according to their own ethos and views, in relation to the religious and moral formation of students and the right to not attend religious instruction.

How our courts define parents’ rights, and religious education, formation, and instruction