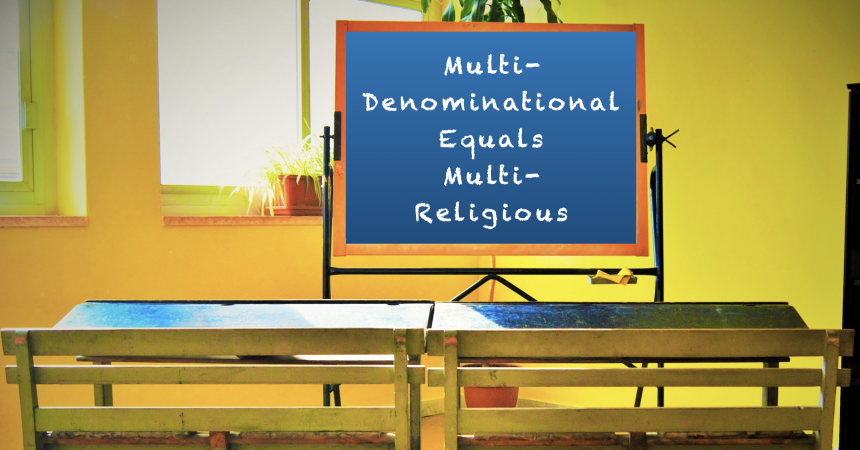 Paddy Lavelle of Education & Training Boards Ireland (a private body) has told the Irish Times that the Community National School model is based on a multi-denominational ethos rather than a religious one, and this means all children are treated equally throughout the school day, regardless of any aspect of their identity.

If Community National Schools do not understand that denominational is a religious term, what hope is there for respect for the convictions and equality of nonreligious families?

There are now more nonreligious in the country than all the minority religions put together, and this will probably rise significantly after the next census on the 3rd of April.

Paddy Lavelle from the ETBI (a private body) went on to say that faith formation was taught in religious schools, and that in Community National Schools children follow a multi-belief and values education curriculum.

It is not up to Paddy Lavelle, the ETBI, Community National Schools, or the NCCA, to decide for parents what is or is not against their conscience. The recent Burke case at the Supreme Court has upheld the rights of parents in relation to the religious and moral education and formation of their children.

The court linked Article 42 with Article 41 (the rights of families) and the Supreme Court in the Campaign to Separate Church and State case found that Article 42 must be read in the context of Article 44.2.4.

The Admission Policies of Community National Schools do not outline how parents can exercise their right for their children to not attend religious instruction or the celebration of religious festivals throughout the year such as Christmas, Eid and Diwali as referred to by Mr. Lavelle of the ETBI in the Irish Times article.

The Toledo Guiding Principles say about these religious festivals that:

“For example, teachers can often take advantage of holiday periods to teach about religions in culturally sensitive ways.

They need to be careful to make the distinction between teaching about the holiday, and actually celebrating the holiday, or using it as an opportunity to proselytize or otherwise impose their personal beliefs.

Drawing appropriate lines can be more difficult when music, drama or other programmes put on performances during holiday seasons.”

So are children from nonreligious families expected to celebrate religious festivals in Community National Schools? Inclusion doesn’t mean that we will include you in our religion. Atheists, humanists, and secularists are not denominations, and the term multi-denominational is not inclusive.

A start towards being inclusive would be recognising the constitutional right of parents in relation to the religious and moral education and formation of their children, and putting in place supervision or providing another subject outside the GMGY class and religious celebrations.