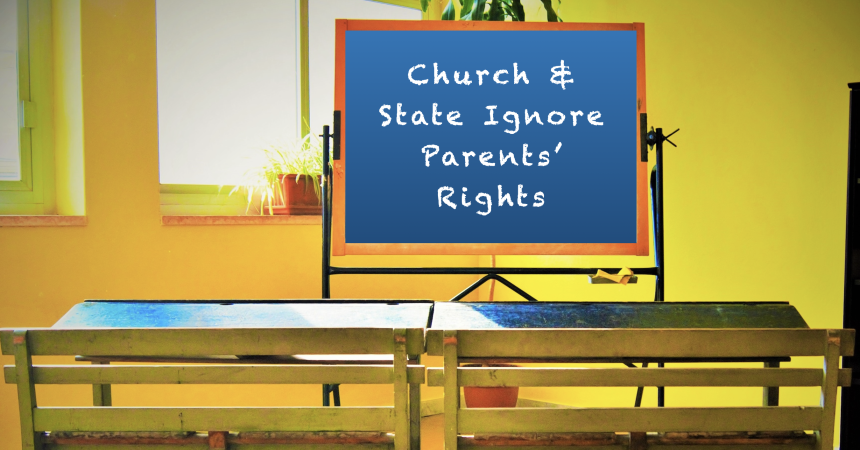 The Catholic Bishops wrote to the Dept of Education in 2018, in relation  to Circular Letter 0013/2018 issued by the Department of Education. This Circular obliged ETB schools to give students another subject if they exercised their right to not attend religious instruction. It recognised that schools should offer students anothers subject if they exercised their Constitutional right under Article 44.2.4 to not attend the NCCA Religious Education course.

As co-trustees, we are concerned, because in the Education Act 1998, responsibility for the moral and spiritual education of students rests is a matter for the trustees.

After this letter was sent to the then Minister for Education, Richard Bruton, the Catholic Church also had two meeting with Department officials to ensure that they got to continue to undermine parental rights in ETB schools. The Bishops have no legal responsibility under the Education Act 1998 in relation to the spiritual and moral education of students from minority religious backgrounds or from families with no religion.

What the Church claims and what the law says

“The State acknowledges that the primary and natural educator of the child is the Family and guarantees to respect the inalienable right and duty of parents to provide, according to their means, for the religious and moral, intellectual, physical and social education of their children.”

The Catholic Church claim that under Section 9- (d ) of the Education Act 1998 they are responsible for the spiritual and moral education of all students including in ETB schools where they are the trustee.

A recognised school shall provide education to students which is appropriate to their abilities and needs and, without prejudice to the generality of the foregoing, it shall use its available resources to-

promote the moral, spiritual, social and personal development of students and provide health education for them, in consultation with their parents, having regard to the characteristic spirit of the school.

But if Section 9 (d) of the Education Act 1998 gave responsibility for the spiritual and moral education of all students to the Catholic Church, then it would be unconstitutional. It doesn’t do that, nor was the intention behind it to hand over control over the constitutional rights of minority parents in relation to the religious and moral education of their children to a private religious body.

In the Guidelines on the Inclusion of Students of Different Beliefs in Catholic Secondary Schools, it states that:

“It is important that the school insists that this is not a ‘free class’ to do homework. The 1998 Education Act states that schools are required to promote the moral, spiritual, social and personal development of students (Section 9(d)). The allocated time on the timetable for Religious Education responds to this and students who opt out of the subject should be required to use this time to study something relating to their own religious tradition or belief, for example, a sacred text. (page 17)

The Guidelines then go on to suggest reading material that they claim is suitable for students who exercise their Constitutional rights under Article 44.2.4, Article 42.1 and Article 42.4)  in relation to religious and moral education.

But the Guidelines selectively quote from the Section 9(d) of the Education Act. It says schools shall promote (not provide) spiritual and moral education, but “in consultation with their parents”. And it is the parents who are the primary and natural educator of the child, and who have an inalienable right and duty provide for the religious and moral education of their children.

The Guidelines also state that:

“In terms of the school’s arrangements for the rights of parents/guardians and students over 18 years to withdraw from participation in religious instruction, it needs to be clearly stated that Catholic schools teaching the NCCA curricula are not offering religious instruction.”

But claiming that the NCCA Religious Education course is not religious instruction has no legal standing, and doesn’t even make sense given the obligation on the State not to interfere in parental rights in relation to the religious and moral education of their children under Article 42.1 of the Constitution.

The Supreme Court has found that the rights of parents under Article 42.1 (religious education) must be read in the context of Article 44.2.4 – the right to not attend religious instruction. (pages 25, 26 Campaign to Separate Church and State v Minister for education – J. Barrington – Supreme Court).

The Catholic Church just ignores that and so does the Department of Education.

It is not up to the Catholic Church, the Department of Education, or the NCCA to decide for parents what is or is not suitable religious or moral education for their children. How can they claim this when the Supreme Court have clearly found that this Constitutional right belongs to parents.

State has duty to not interfere in the rights of parents

In the recent Burke case, the Supreme Court found that, under Article 42.1 of the Constitution, the State have a duty not to interfere in the inalienable right of parents in relation to religious and moral education of their children. (para 73 – J. O’Donnell Burke case – Supreme Court). Under Article 42.2, parents can provide this education at home or in schools funded and recognised by the state.

Justice O’Donnell states in the Burke case that:

“It is, in any event, part of the right and duty of parents to provide (and therefore the right of their children to receive) education under Article 42.1, which right the State has guaranteed to respect. The Irish text of Article 42.1 provides an important flavour in this regard:- “… ráthaíonn [An Stát] gan cur isteach ar cheart doshannta ná ar dhualgas doshannta tuistí chun oideachas … a chur ar fáil dá gclainn” which conveys the sense that the State cannot interfere with (cur isteach ar) the right of parents subject to the Constitution to provide education under Article 42.1, a right which Article 42.2 contemplates may take place at home.”

The Supreme Court also found that a right inures to the family under Article 42.1 of the Constitution to be the:

“primary and natural educator of the child” and the State is required “to respect the inalienable right and duty of parents to provide … for the religious and moral, intellectual, physical and social education of their children”. Hence, under Article 42.2, the mother and father of Elijah Burke and Naomi Power were “free to provide this education in their homes or in private schools or in schools recognised or established by the State.”(para 4 J. Charleton – Supreme Court – Burke case).

Justice Charleton also said that Article 42.4 accords with Art 41 (the authority of the family), a foundational pillar of the Constitution. Article 42.4 obliges the state to have ‘due regard’ for the rights of parents while ‘endeavouring’ to supplement and give reasonable aid to private and corporate educational initiatives.

Given the constitutional rights of parents, how can the Catholic Church claim that it is responsible for the spiritual and moral education of students from minority backgrounds in schools under their patronage?

It is quite clear from text and structure of the Constitution, and the Supreme Court judgements, that it is parents who are responsible for the religious and moral education of the children. Parents can provide this education at home while accessing other curriculum subject for their child in any publicly funded schools (Art 42.2). It is the duty of the state to have ‘due regard’ for this right when funding schools (Art 42.4).

Atheist Ireland will continue to campaign for the Constitutional rights of minorities attending publicly funded schools.

How our courts define parents' rights, and religious education, formation, and instruction