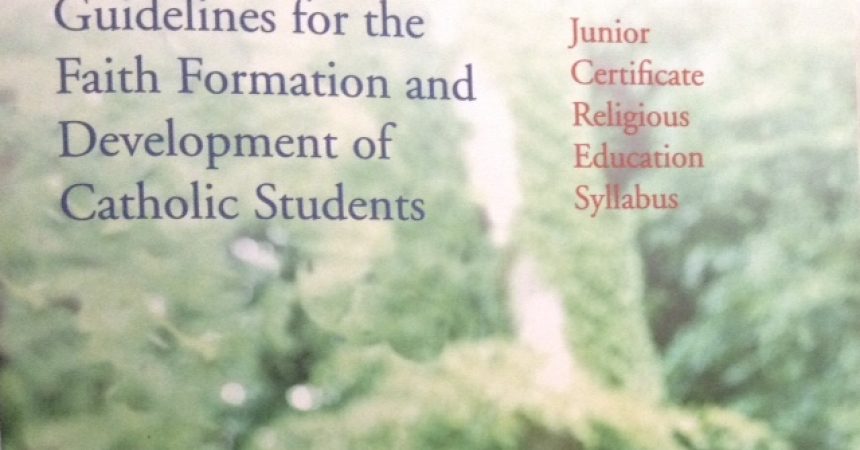 Merging the Curriculum with Faith Formation

The state Religious Education course at second level (an exam subject) is combined with the “Guidelines for the Faith Formation and Development of Catholic Students” and presented to all parents as suitable for their children. The stated intention of the NCCA was that this must be an optional subject but despite this, the various patron bodies have managed to make it compulsory in the vast majority of schools, including ETB schools and colleges. Under various agreements all ETB/VEC schools and colleges have Catholic Religious Instruction and formation as part of the school day. The NCCA and the Department of Education were aware that this would happen, given the lack of available time in a busy schedule for all schools to introduce such a course. The Department of Education and the NCCA failed to take sufficient care to ensure that the rights of all parents and their children were respected. They simply ceded control to the interests of private patron bodies.

From the very start of the work performed by the NCCA Course Committee, there was a recognition that any attempt to add a new State Religious Education course on top of the existing faith formation of the patron, would present timetabling difficulties. This was recorded in the minutes of Course Committee meetings as early as 22nd February 1994.

Making space in the timetable was a continuing issue for the Course Committee and on 21st February 1996 there was the first discussion of “flexibility” in this regard. It should be noted what this flexibility pertains to. The separation of the patron’s religious instruction and faith formation content, from the new State curriculum intended for all faiths and none, is a constitutional requirement. Any suggestion of flexibility in this regard can only impinge on the constitutional rights of parents to ensure that the teaching of their children is in conformity with their convictions. The Church made no secret of their aspirations with regard to retaining religious instruction and faith formation within the new state Religious Education curriculum. On 13th March 1996, the Irish Bishop’s Conference issued a press release about the NCCA course. In the statement, they openly discussed the State curriculum as “complementing and enhancing” their current religious instruction and faith formation content, rather than remaining separate, as a new State curriculum for students of all faiths and none.

When the early outputs from the efforts of the Course Committee reached some schools, the intention to merge the new State Religious Education curriculum with the existing religious instruction and faith formation content, became more overt. For example, on 6th October 1997 Mr Joseph O’Sullivan (Principal of Listowel Comprehensive School) wrote to Fr Donal O’Neill (of the Catholic Catechetical Office) expressing this view in simple arithmetic.

As Mr O’Sullivan points out in his letter (which was copied to the NCCA) even if all of the existing Religious Instruction and faith formation hours within the timetable are merged into the State curriculum, there are still insufficient timetable hours to accommodate the new state RE course. The intention that the practical implementation of the new course would involve such a merger with the existing Religious Instruction and faith formation content is quite obvious from Mr O’Sullivan’s letter. This fact was reinforced when Fr O’Neill wrote to the NCCA on 4th November 2011, on behalf of the Catholic Catechetical Office. In this letter he summarized the feedback from numerous other schools, which was consistent with the view expressed by Mr O’Sullivan.

Those involved with the practical implementation of Religious Education, continued to point to out to the NCCA that their “secular”, objective course would inevitably be merged with the existing catechetics, as otherwise children would be “devoid of a proper Catechetics”. On 5th December 1997, Diocesan Adviser Fr Pat McHugh explained this again to the NCCA and also added that “many school principals faced with the need to provide the programme will replace catechetics with this program”. Letter from Diocesan Adviser to NCCA from 5th December 1997

In fact, so obvious was this reality that it was overtly expressed within a NCCA briefing note for a meeting with the Episcopal Conference. On 14th January 1999, the briefing note was written so that it could be communicated to the bishops that the NCCA knew their course would only be used “as a support” for faith formation and that the State course was “designed to offer this flexibility”.

It is also worth noting that it was not just the NCCA but also the Department of Education that was aware of the funding and timetabling constraints, which in practice required the merging of the courses. Following direct contacts from the Roman Catholic Catechetical Office, on behalf of the Diocesan Advisers, then Minister Michael Woods responded in writing to Fr O’Neill on the 2nd June 2001. In this correspondence, the Minister acknowledges discussion of the timetabling issues. He further confirms that notwithstanding the views of the NCCA on the timetabling requirements for the State course, patrons will make timetabling arrangements to suit their own agenda. At no stage did the Minister or the NCCA raise that issue of informing parents that Catholic Religious Instruction and the State RE Course will be merged. It is not difficult to guess what timetabling decisions that Roman Catholic schools across the country made, since they had been advertising their plans and intentions to the NCCA for many years. The Catholic schools integrated their own Religious Instruction and faith formation content with the NCCA religious education curriculum and then they made this course compulsory for all students. This was despite the NCCA relying on the course being optional, in order to address some legal concerns. This happened in second level schools under the patronage of the Catholic Church but also in all ETB/VEC schools and colleges and they had various agreements with the Catholic Church.

If this was an entirely predictable outcome, it was also entirely predictable that there would still continue to be ongoing timetabling pressures even after the new course had been launched. From the Course Committee meeting on 15th January 2009, “overload and overlap” became a standing agenda item that was discussed on an repeated basis. In the efforts to reduce the volume of work in the course though, it was noticeable that the items to cut were not determined based on “academic” or “educational” considerations. Rather, as described in the minutes of the Course Committee meeting from 26th May 2009, such decisions were made based on “theological” and “doctrinal” considerations. Minutes of Course Committee meeting from 26th May 2009

If Religious Instruction and faith formation content had already been integrated into the State course in practice and some of the State course had to be cut back by the NCCA, it would make sense that denominational considerations would take priority. It seems that for the NCCA, at this point denominational interests had also taken priority over the constitutional rights of children and their parents.

As the State Religious Education curriculum defined by the NCCA has been merged with the “Guidelines for the Faith Formation and Development of Catholic Students”, the rights of religious minorities and the non-religious have been systematically ignored. These Roman Catholic guidelines portray atheists and humanists as a “Challenges to Faith” alongside materialism and fundamentalism. As described in the extract below, this hardly respects the philosophical convictions of the non-religious.

The guidelines for what should be an academic course, developed for students of all faiths and none in mind, is merged with statements like “Agnosticism/atheism/religious indifference can be interpreted as flight from the the ultimate question of existence, that is, God”. This statement is justified based on references to Christian scripture and the Roman Catholic Catechism.

In the Guidelines for Teachers documentation associated with the State Religious Education Course it is stated that teachers must give attention to:

“Appreciating the richness of religious traditions and acknowledging the non-religious interpretation of life;”

This is one of the main aims of the state RE Course. Acknowledging the non religious interpretation of life does not constitute respect under human rights law. Instructions to teachers that the religious must be appreciated, whereas the non-religious must merely be acknowledged, hardly seems to be offering equal respect to the humanist and atheist parents and their children. However, this comment represents a mere hint of the degree to which the NCCA course has actually been compromised by denominational interests, as has been demonstrated by the documents obtained under Freedom of Information.

Catholic Bishop asks if Church should stop trying to convert secular society. They could start with schools.