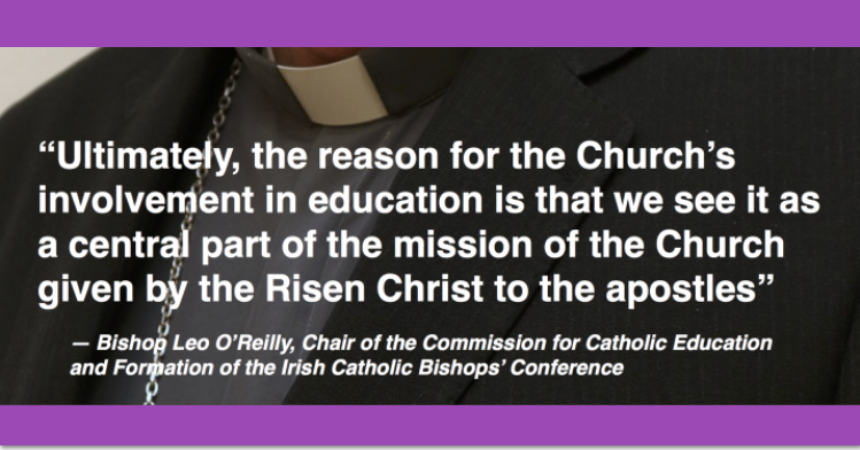 This undermines religious freedom, and the right of parents to ensure that the teaching of their children is in conformity with their convictions.  It also breaches the rights of children, who have the right to Relationship and sexuality education in an objective, critical and pluralistic manner.

In the Introduction to the Primary Schools Curriculum it states that:

“The approach to the SPHE curriculum is determined in the first instance by the school ethos and will be mediated to the child in three contexts: through a positive school climate and atmosphere, through integration with other subjects, and in specifically allocated curriculum time.”

One of the specific aims of the Primary School Curriculum is-

“to enable children to develop spiritual, moral and religious values”.

The General Objective is to –

“develop the capacity to make ethical judgements informed by the tradition and ethos of the school”.

As the vast majority of publicly funded schools in Ireland operate under a Catholic ethos, children cannot access Sexual and Reproductive Education that is free from the influence of the Catholic Church.

The Catholic Preschool and Primary Religious Education Curriculum for Ireland states that  children should be enabled to:-

“apply Christian moral precepts, maxims and rules to their own lives”

“develop their understanding of Christian moral living as uniting themselves with Jesus’ way of love and faithful loyalty to the Father.”

“develop an understanding of human sexuality in a moral, spiritual and social framework with particular emphasis on the virtue of chastity(RSE)

“RSE in a Christian Context”

“God created male and female in God’s plan for creation”.

“Life is precious and God-given from the moment of conception to natural death.”

“Sexual intercourse is an act of love within marriage.”

“Christians respect life because life comes from God and every person as a right to life. Therefore, abortion is forbidden.”

A Catholic ethos in publicly funded schools undermines religious freedom because it fails to respect the rights of parents and children. This includes Catholic parents who do not accept all the teachings of their Church.

Submission from Atheist Ireland to the CEDAW

Atheist Ireland has sent this Submission to the UN Committee on the Elimination of Discrimination against Women (CEDAW).

1.1 Atheist Ireland is an Irish advocacy group. We promote atheism and reason over superstition and supernaturalism, and we promote an ethical, secular society where the State does not support or finance or give special treatment to any religion. Since being formed in late 2008, we have campaigned for a secular Irish Constitution, parliament, laws, government, and education and healthcare systems.

1.2 This Submission outlines how the Irish State has failed to ensure that children and adolescents have Social, Personal and Health education in an objective and neutral manner and free from religious influence.

1.3 Article 10 of the Convention of the Elimination of Discrimination against Women states that:

“States Parties shall take all appropriate measures to eliminate discrimination against women in order to ensure to them equal rights with men in the field of education and in particular to ensure, on a basis of equality of men and women:

(c) The elimination of any stereotyped concept of the roles of men and women at all levels and in all forms of education by encouraging coeducation and other types of education which will help to achieve this aim and, in particular, by the revision of textbooks and school programmes and the adaptation of teaching methods;

(h) Access to specific educational information to help to ensure the health and well-being of families, including information and advice on family planning.”

1.4 In March this year the Committee on the Rights of the Child in the Concluding Observations stated that: [1]

1.5 Article 42A of the Irish Constitution obliges the State to recognise and affirm the natural and imprescriptible rights of all children and as far as practicable, by its laws protect and vindicate those rights. The Irish State has failed to guarantee and protect the rights of girls and adolescents to education in reproductive health.

2.1 At Primary and Junior Certificate Level Relationship and Sexuality Education/ Social, Personal and Health Education (SPHE) is delivered according to the ethos of the Patron. The Catholic Church is the Patron to the vast majority of schools in Ireland, despite those schools being funded by the State and being, in effect, the State education system.

2.2 The right to health encompasses access to education and information on sexual and reproductive health. The UN has said that: [2]

“The Committee on the Rights of the Child has recognised that “States parties should provide adolescents with access to sexual and reproductive information, including on family planning and contraceptives, the dangers of early pregnancy, the prevention of HIV/AIDS and the prevention and treatment of sexually transmitted diseases (STDs).”

“Similarly, the Committee on the Elimination of Discrimination Against Women has underscored the need to pay particular attention “to the health education of adolescents, including information and counselling on all methods of family planning.”

The Committee has further specified that health education for adolescents should address “gender equality, violence, prevention of sexually transmitted diseases and reproductive and sexual health rights.”

“The approach to the SPHE curriculum is determined in the first instance by the school ethos and will be mediated to the child in three contexts: through a positive school climate and atmosphere, through integration with other subjects, and in specifically allocated curriculum time.”

One of the specific aims of the Primary School Curriculum is-

“to enable children to develop spiritual, moral and religious values”.

The General Objective is to –

“develop the capacity to make ethical judgements informed by the tradition and ethos of the school”.

2.5 As the vast majority of schools in Ireland operate under a Catholic ethos children cannot access Sexual and Reproductive Education that is free from the influence of the Catholic Church.

2.6 Parents in Ireland have no choice but to send their children to schools where religion is integrated into social, personal and health information, the state curriculum is not delivered in an objective, critical and pluralistic manner. The state cedes control to the interests of private Patron bodies. None of these Patron bodies have ratified the Convention on the Elimination of Discrimination against Women.

2.7 The Education Act 1998 does not oblige any school to deliver the state curriculum in a neutral and objective manner and parents are left dealing with Boards of Management who are legally obliged to uphold the ethos of the Patron who in the majority of cases is a religious body.

Uphold, and be accountable to the patron for so upholding, the characteristic spirit of the school as determined by the cultural, educational, moral, religious social linguistic and spiritual values and traditions which inform and are characteristic of the objectives and conduct of the school, and at all times act in accordance with any Act of the Oireachtas or instrument made thereunder, deed, charter, articles of management or other such instrument relating to the establishment or operation of the school.”

3.1 In July 2014 when Ireland appeared before the UN Human Rights Committee under the International Covenant on Civil & Political Rights they were asked: [5]

“How does the Delegation explain the compatibility with the Covenant of a state of affairs that allows private schools, which have a near monopoly in Ireland on a vital public service, to openly discriminate in admission policies between children on the basis of their parents’ religious convictions?

3.2 The Irish State has never responded to this question. There is no neutral studying environment in Irish Schools as the state does not oblige schools to deliver the state curriculum in an objective, critical and pluralistic manner.

4.1 IHREC has recommended in their submission on the Education (Admissions) to Schools Bill that: [6]

“The Commission recommends that the new section 62(6) to be inserted into the Education Act should be amended to the effect that, in setting out the characteristic spirit and general objectives of the school, outside the specific context of faith formation and religious instruction which parents wish to avail of and where exemptions apply, regard shall be had to providing information in relation to religion in an objective, critical and pluralistic manner that avoids indoctrination.”

4.2 In their Submission to the Department of Education Statement of Strategy 2016-2018, referring to the Schools Admission Bill, the Ombudsman for Children has stated that: [7]

“Although in theory Relationships and Sexuality Education (RSE) has been mandatory since 1996, in practice each school has the discretion to develop its own RSE policy in accordance with its own ethos. In addition to this, the policy is subject to the approval of the board of management of the school.

This leads to a significant inconsistency in the delivery of the RSE programmes throughout the country’s schools. It would be useful to consult with children and young people around their experiences of the RSE curriculum and in relation to what they would consider helpful in terms of curriculum content and delivery. Parents should also be consulted in this regard.

– Children and young people should be consulted on their experience of RSE in schools. Parents should also be consulted in relation to their needs with regard to supporting the education of their children in the area of relationships, sexuality and sexual health.

– A single consistent curriculum for relationships and sexuality education should be developed and introduced across all schools. The standard curriculum should include sexual and reproductive health education at post-primary level. This curriculum and its delivery should be regularly evaluated.”

4.3 There is the option to opt out of SPHE under Section 30.2 (e) of the Education Act 1998 which does not oblige any student to attend instruction in any subject which is contrary to the conscience of the parent of the student or in the case of a student who has reached the age of 18 years, the Student.

4.4 There are two issues in relation to the above:

4.5 Children are receiving SPHE/ Relationship and sexuality education contrary to the convictions of their parents and not in accordance with the rights guaranteed under CEDAW.

5.1 In Ireland the state cedes control of the education system to private bodies (mostly religious), and has failed to put in place laws and policy that would ensure that children and adolescents can access Social, Personal and Health information in a neutral studying environment and free from religious influence and in accordance with the rights guaranteed under the Convention on the Elimination of Discrimination against Women.

Protecting the rights of atheist, secular and minority faith teachers in Irish schools