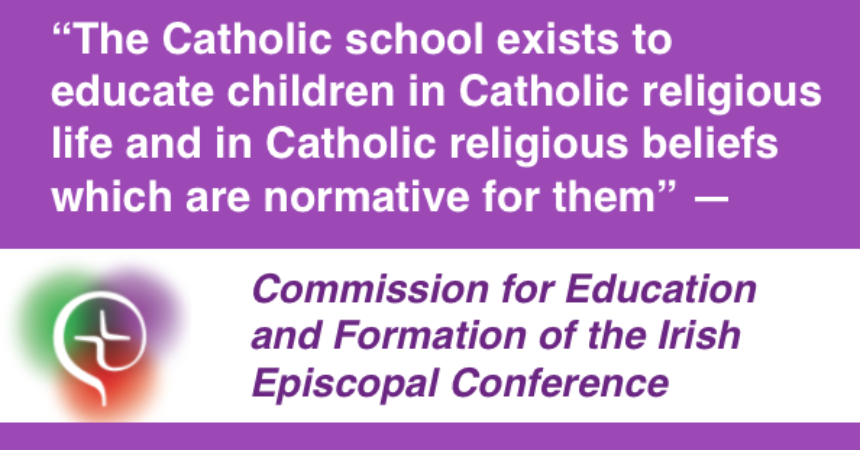 “The Catholic school exists to educate children in Catholic religious life and beliefs,” and other quotes to the NCCA

If you are still wondering about the grip that the Catholic Church has on Irish schools, here are some sample quotes from Catholic educators in their submissions to the NCCA report on the proposed new course on Education about Religion and Beliefs. You can read all of the submissions here.

The following sample quotes are from:

Commission for Education and Formation of the Irish Episcopal Conference

[Under the NCCA proposals] young children could be given the impression that beliefs are things which they create themselves, as if human beings were the source of religious beliefs.

In secular approaches to Religious Education, reason is primary… In Catholic schools, Revelation is primary and the learner’s experience and reason are brought into dialogue with it.

“Catholic schools seek to reflect a distinctive vision of life and a corresponding philosophy of education. This is based on the Gospel of Jesus Christ.” This statement of mission is one which is practised and aspired to everyday in Catholic Schools across Ireland.

Catholic religious education invites Catholic pupils to immerse themselves in the Catholic faith tradition and forms them in faith around the person of Jesus Christ. Pupils are called to encounter religion with the emphasis on reason informed by revelation. This encounter is not just limited to religious education but is evident in every aspect of school life; it is an essential element in the characteristic spirit of a Catholic school.

It is essential to state that in faith-based schools religious education is inseparable from the ethos (characteristic spirit) of the school. As explored in Section 3 of this document, the approach to religious education in Catholic schools does not just occur in a single lesson or subject area but permeates all activities in the school. In a Catholic school our “raison-d’etre begins with God”. Everything espoused and taught in Catholic schools therefore should communicate the same understanding of the human person and of life that is present in the Ethos or Characteristic spirit of the school.

(Note: we have included this quote here because, while Community National Schools are theoretically multi-denominational, they have agreements with the Catholic Church to maintain faith formation.)

The Consultation Paper proposes that teachers will adopt the Toledo Principles of teaching ERBE in a manner that is objective, critical and pluralist. These qualities would not have been the hallmarks of faith based teaching and will require significant Continued Professional Development for the teachers.

In its current form it would be impossible to implement it in Catholic schools under my patronage.

I make this submission as Patron of one hundred and sixty four Catholic Primary Schools in Kildare and Leighlin Diocese… We believe that each child in our schools is wonderfully made in the image and likeness of God.

I believe that the current NCCA proposal to introduce Education about Religion and Beliefs and Ethics represents a threat to the ethos of Catholic schools, and will make the work of upholding the characteristic spirit of our faith-based schools almost impossible.

[Under the NCCA’s secular post-modern worldview] truth can be created, no single religious tradition has a privileged position, reason seeks an understanding of belief and the emphasis is firmly placed on rational thought, self-determination and critical evaluation. In our Catholic faith tradition, truth is revealed by God, faith seeks understanding, critical reflection is on a lived experience of faith and reason is enlightened by faith.

[Under the NCCA approach] there is no space for the child to be formed by the experience of a specific religious identity as currently happens in a faith-based school.

Our teachers are leaders in facilitating the integration of children of all faiths and different stances for living into the welcoming and hospitable environment that is the Catholic school.

In a faith-based school, religious education cannot be compartmentalised but must be fully acknowledged as part of the lived reality of Catholic families.… The proposal that at some point of the school day, children and their teachers will be expected to suspend their belief system and construct a different reality as the primary educators of their children in the ways of faith.

Finally, I wish to come to the person of the centre of all that we do in Catholic education, the child and his/her relationship with Jesus Christ which were calls to foster and develop throughout the journey through the primary school.

In Share the Good News, the National Directory for catechesis in Ireland, it states, ‘the Catholic school is identifiable by its Catholic ethos. It ‘models, and transmits a philosophy of life inspired by belief in God and in the life, death and resurrection of Jesus Christ.’

In a Catholic school context, Jesus is at the centre of everything that happens, be it policy documents, religious education, curriculum matters, relationships, pastoral care, inter religious and intercultural dialogue and education et cetera everything is viewed through the lens of faith.

The NCCA proposals seeks to promote a secular approach to religious and moral truths. However in Catholic schools, as children grow in their relationship with Jesus, they come to know Jesus as the way, the truth and the life.

Christianity has always recognised that religious and moral truth is objective. In other words, there are truths that are the same for all human beings living in every century, culture, and circumstances. For example through the patrons’ programmes in schools children are taught that “Jesus Christ is God,” that “human life begins at conception.”

Denominational schools exist to educate children in religious life and in religious beliefs which are normative for them, beliefs that have been revealed by God.

For Catholic schools, there is an express and implied duty that the children attending will be educated in the fullness of the faith.

We suggest that the curriculum as framed will be incompatible and unworkable, when the proposed curriculum is considered within the context of the Catholic vision of education which is rooted in its “Christian concept of life centred on Jesus Christ: he is the one who ennobles people, gives meaning to human life, and is the model which the Catholic school offers to its pupils.”

It is the function of the diocesan Secretariat to send out primary diocesan schools advisors to support and monitor the teaching of religious education and the overall ‘characteristic spirit’ in a school. This is an important function of the education secretariat across each diocese in the country. It is done as comprehensively as possible, on behalf of the local ordinary or Bishop, who is unilaterally obliged to fulfil this function.

[The NCCA proposal] is in all likelihood unworkable in a Catholic school and unfortunately we cannot therefore support this proposal as framed. It is for that reason that we feel we would breach our constitutional duty to parents to educate pupils, if we do not educate about the revealed objective truth that will ground the ethics of future citizens in a modern Irish society.

One of the keystones of the proposed ERBE curriculum is that, “the teaching of ERB and ethics according to the Toledo principles should be supported by teaching that is ‘objective, critical and pluralist”’. For schools with a faith based ethos, such an approach is contrary to what those schools hold to be true.

While it is true that inclusivity is a value shared by schools of a Christian ethos, it is neither the only value comprising this ethos nor an absolute “at-all-costs” value. Furthermore, inclusivity itself is neither univocal it how it can be understood and pursued, nor neutral as to its effects on other goods.

So an agnostic approach to religious education would indeed foster a particular version of inclusivity within the classroom, but only by excluding from the classroom the truth of particular religious claims (such as the divinity of Christ or the existence of God)…

Callystown national school is a Catholic school and is under the patronage of the Archbishop of Armagh. The board believes that the Catholic ethos of our school is critical to its identity and is the foundation of all that is good in our school. Our Catholic ethos informs our whole day at school, not only the religion class, but it is at the heart of the academic, social, personal and spiritual work of the school.

The board believes that the introduction of the proposed new subject Education about Religions and Beliefs would compromise this ethos. It feels that a new and separate religion subject that is based only on knowledge and does not deal with spiritual development would create confusion and uncertainty with her young pupils.

Despite increased secularisation, so evident in our society, the passing on of a healthy faith to our children remains a critical challenge to all of us who are committed to the gospel message of Jesus Christ.… The commitment and energy of the Catholic Church has given Ireland a world-class education system. It is important that the state remembers this and continues to support the churches effort by respecting the characteristic spirit of the Catholic ethos in our schools.

Principals of the schools in the Catholic Parish of Clonbologue, Offaly

The proposed ERB curriculum, with its post-modern stance, integrated across the curriculum areas, once directly challenge the Catholic view of education which understands Catholicism to be a reality lived out in every aspect of the school.

Catholic school guidelines on inclusion deny the rights of secularists