The RTE News Education Correspondent, Emma O’Kelly, has described as “extraordinary” the statement by the CEO of Tipperary ETB that its secondary schools have a Catholic ethos.

This was revealed in documents obtained by Atheist Ireland under the Freedom of Information Act, which we published here.

Legal duty of the ETB to decide the school ethos

The CEO of the ETB, Fionuala McGeever, told school principals in 2015 that: “The Christian belief, ethos and characteristic spirit of our schools is Catholic, and this needs to be addressed in all policies, Board of Management minutes, etc.”

She has now told RTE News that her comments need to be put in context. “This is rural Ireland”, she says, “and our pupils are 99.9% Catholic. I was only repeating what my schools tell me, that their ethos is Catholic”.

But this supposed 99.9% figure, which seems highly unlikely to be accurate, is not what determines the ethos of a school. As the RTE News article points out, it is the function of the ETB, not the school, to set the school’s ethos.

And Fionuala McGeever already knows this. In 2008, she wrote a letter to the principals of Tipperary ETB (then VEC) schools, attaching a Template for Admission Policy. That document is also among those that Atheist Ireland obtained under Freedom of Information.

That letter and template made clear that framing the ethos or characteristic spirit of the school is a function of the patron, not the board, and the board’s only function in relation to it is to uphold it. It stated that the board must not and cannot vary this ethos. 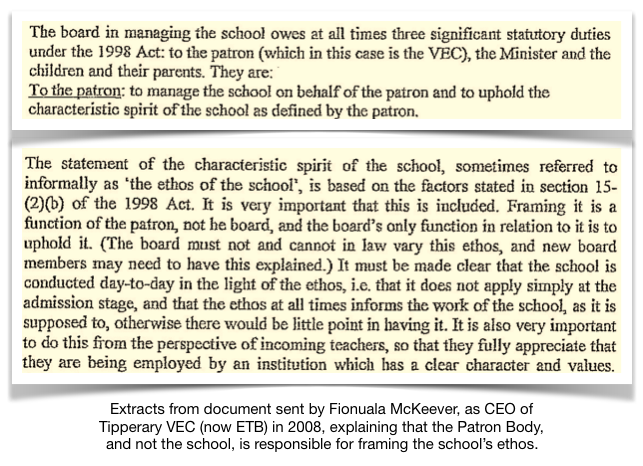 So why is Ms McGeever now saying that she is merely repeating what the schools are telling her about their ethos being Catholic? Why is Tipperary ETB evading its legal duty to decide on school ethos?

The claim that a section of a policy has been omitted

Ms McGeever has also told RTE News that that a policy document published on the Atheist Ireland website, detailing the policy for opting out from religion classes, is incomplete. She told RTE that an entire section has been omitted. However, when asked by RTE News to supply the missing section, she declined to do so.

Atheist Ireland published in full the Opting Out Policy that we obtained, and we quoted from it and linked to it in the article. If there is anything omitted from this policy, then it must have been omitted by Tipperary ETB when they sent us the documents that we obtained under Freedom of Information.

This may be possible, as we already have experience of Tipperary ETB accidentally omitting a page of a document that they sent to us. In a three page summary of meetings between a school and the Catholic Diocesan Advisor, the ETB omitted the middle page.

We noticed this because, unlike the other documents, the language in this didn’t flow from the end of the first page to the start of the second page. When we told them this, they explained that they had accidentally failed to photocopy the middle page, and they sent it to us.

That missing page included details of the Catholic Diocesan Advisor telling the school that Religion should be viewed as a core subject (which means no alternative subject would be offered) and that religious education includes learning into religion (which in academic pedagogy is suitable only for denominational schools and, despite the claims of the Diocesan Advisor, is associated with indoctrination).

These Freedom of Information documents confirm arguments that Atheist Ireland has been making for years — that State-run ETB schools are in practice promoting Roman Catholic teaching and that, in many parts of Ireland, there is no practical alternative for non-Catholic parents. We will continue to follow up on this issue.

Minister confirms that many ETB schools are denominational