Atheist Ireland has recently completed a crowd funding campaign, which has allowed for access to public documents within the ETB Sector, despite the very high fees that have been charged (including for documents that should already be published on the websites of the ETBs). We believe that our campaign in this area can win some real and meaningful reforms with regard to religiosity across the ETB Sector. For example, the extract from the minutes of a Kildare and Wicklow ETB meeting illustrated below, demonstrates that our campaign is having a real impact. It is acknowledged here that while there is an absolute right for parents to opt their children out of religion classes, ETB schools often just ostracise such children by making them sit at the back of the room.

Extract from minutes of KWETB Principals Meeting on 6th September 2016

These policy positions are not merely academic either. Such policies are often strictly imposed by ETB schools. For example, the extract below is taken from the Coláiste Chraobh Abhann Parent and Student Handbook. The policy described here with respect to the absolute right of parents to opt their children out of religion classes, is to tell parents wishing to exercise this right that they can either collect their child from school each time a religion class is timetabled, or else let their child remain in the room to be exposed to the same religiosity as everyone else.

The obligation on ETB schools should be to implement policies that are fully inclusive of those from all faiths and none. It should not be to perform a sectarian headcount of pupils and then impose the religiosity of the majority on all minorities. Colaiste Lorcain is a Designated Community College, as it was formed after the amalgamation of a vocational school with another school that was under the patronage of the Poor Servants Of The Mother Of God.

As these Designated ETB Colleges are then funded by the State, it might be assumed that such an amalgamation process involves a dilution of the Catholicism within the merged entity. It seems that in many ways though, the creation of Designated ETB Colleges instead involves the further spread of Catholicism into the ETB Sector. For example, the RE Policy at Colaiste Lorcain not only gives a formal role to Catholic Diocesan advisors but also explicitly refers to the faith development activities within the school.

This means that the Catholic Church has control over the hiring of Religion Teachers. Teachers that teach Catholic Religious Instruction in Designated Community Colleges must be approved by the relevant religious authority. They must be trained to teach Catholicism, and have the relevant modules takes in place like DCU. Because the State religious education course is combined with Catholic religious instruction in all ETBs, this means that the Church has control over the hiring of all religion teachers.

This has resulted  in religious discrimination as teachers from minority faiths and the non religious may want to train to teach the State religious education course but cannot do so because they will not be able to get employment because they are also required to have training to teach Catholicism. 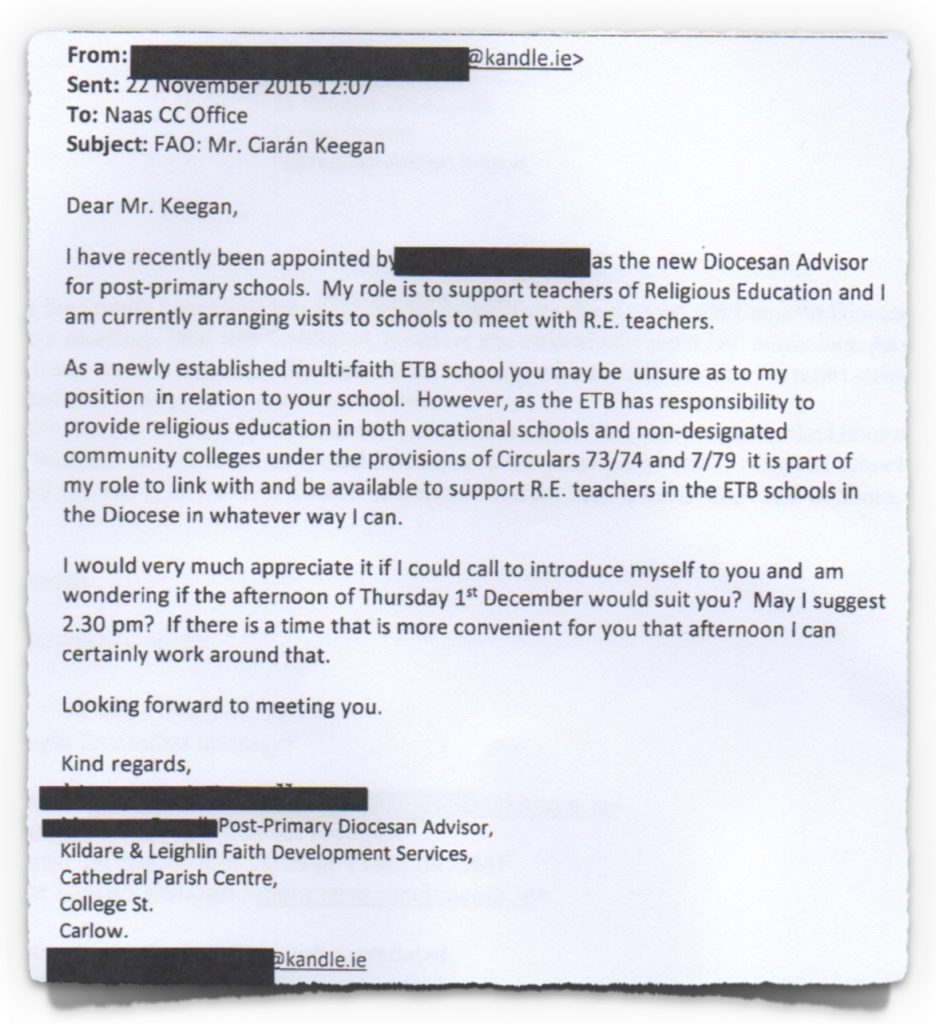 Circular Letter 73/74 referred to in this email, does not particularly mention the Catholic Church or any other religious body. A Board of Management in a non-designated Community College is required to ensure that:-

The above does not mean that the Catholic Church has control over the hiring of religion teachers or that a Catholic religious ethos should prevail in the school. Nevertheless, Catholic Diocesan Advisors seem to be afforded all of the same privileges by many ETB schools, as they are by schools under the direct patronage of the Catholic Church.

KWETB have refused us access to Documents that relate to the Community National Schools. We are appealing that decision.

Links to other documents

Atheist Ireland obtained more documents under this FOI request than those that this article refers to. Here are links to some of the documents that we obtained from Kildare Wicklow ETB.

The numbers refer to the sequence in which Kildare Wicklow ETB numbered the pages that they sent to us. Some documents have more than one page: where this is the case, the file number is that of the first page of the document.