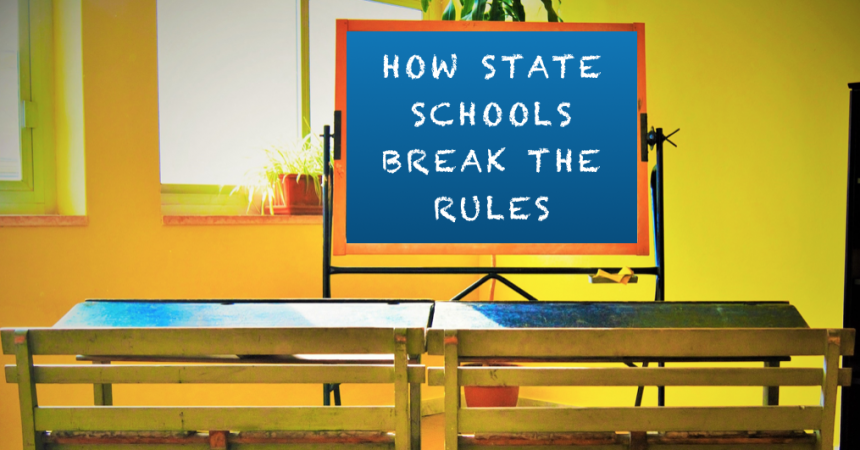 ETB schools continue to discriminate on the ground of religion

The issue at the WRC case was that the school in its Admission policy said it is multi-denominational and does not discriminate between faiths or beliefs, while giving preference to students from Church of Ireland backgrounds.

The WRC said their Admission policy and ethos was irreconcilable with giving preference to Church of Ireland students. You can read our article on the case here and the link to the case on the WRC website here.

This ETB School also has a Catholic Chaplain who is paid by the State to faith form Catholic students.  This issue is also irreconcilable with its multi-denominational ethos and is religious discrimination.

The school also teaches the children of atheist families to see the relevance of religion to their lives. How is that suitable for non-religious families? And ETB schools don’t offer students another subject if they exercise their right to not attend religion classes.

ETB schools claimed it was multi-denominational

This ETB school claimed in its Admission policy that it is multi-denominational and treats all faiths and beliefs equally. Despite this claim, it gave preference in admittance to students from a Church of Ireland background who attended the local Church of Ireland National School.

The WRC said that this was religious discrimination under the Equal Status Act. The school could not rely on the exemption under Section 7.3(c) of the Act that permits schools with a particular religious ethos to give preference to co-religionists.

The school is a designated Community College. It has a Catholic Chaplain paid by the State to faith form catholic students. This must also be religious discrimination as, if the school cannot rely on Section 7 of the Equal Status Act, then it can hardly rely on Section 37 of the Employment Equality Act, as it has not got a particular religious ethos.

Why are the ETBs paying only Catholic Chaplains to faith form Catholic students? The Contract for Catholic Chaplains clearly says that this is their purpose, and the Model Agreement for the school states that the Chaplain must be approved by the relevant religious authority, which in designated Community colleges is the local Catholic bishop.

1.2 Faith teaching and practice are intrinsic to school chaplaincy. Accordingly, the Chaplain is a person of faith, a Priest, Religious or a lay person on the relevant faith, committed to the teaching and values of Christ, acting on behalf of the Church and the school community while upholding the teaching and moral standards and practices of the Competent Religious Authority, together with the characteristic spirit and founding intention of the school.

1.6 The Chaplain shall ensure that the characteristic spirit of the school, reflecting the founding intention of the school and the school’s mission statement, finds practical expression in faith formation as well as pastoral, liturgical, para-liturgical and outreach activities. In that regard, the Chaplain shall pay due regard to the provisions for religious instruction and religious worship as provided for in the Model Agreement in Community Colleges.

3.2 The Chaplain will arrange activities to mark and celebrate the major feasts and the seasons of the Church year, in consultation with the Principal, the Religious Education/Catechetics team, members of staff and clergy of the particular local religious denomination with whom the Chaplain is required to liaise.

3.3 The Chaplain, in respecting staff and pupils of other faiths or none, will endeavour to make reasonable and suitable provision for such, where feasible and practicable.

3.4 In liturgies which are school based, the Chaplain will seek to facilitate participation by other faiths, where such is desired and appropriate, while following the norms of the Church which governs such matters.

The requirements for the job as Chaplain in ETBs are:

The ETBs are claiming that they don’t discriminate on religious grounds, while their practices show clearly that they do.

What is the point of having the Model Agreement for Designated Community Colleges? Why are the ETBs getting into arrangements to discriminate against minorities while claiming that their schools treat all faiths and none equally?

Supreme Court ruling on the payment of Chaplains in schools

In the Supreme Court case on the payment of Chaplains in Schools, Justice Barrington stated that:-

“Secondly while it is obviously right and proper that a Chaplain should counsel and advise any child who may consult him about its problems it would be constitutionally impermissible for a Chaplain to instruct a child in a religion other than its own without the knowledge and consent of its parent.” (Justice Barrington – Campaign to Separate Church and State – Page 28)

A parent has informed us that the Chaplain in this particular school once gave out to first years for not attending prayers. It is Constitutionally impermissible for a Chaplain to force or coerce students into practising religion or to teach them another religion without the consent of their parents.

To sum up, this particular ETB school gives preference in admissions to a student from a church of Ireland background, while paying a Catholic Chaplain to faith form Catholic students, and teaching the children of atheist families to see the relevance of religion to their lives.

This is what families are left dealing with when they sent their children to ETB schools. The ETBs are not the solution to discrimination in our education system; they are part of the problem. They say one thing and do another and have no respect for minorities.

Department of Education is undermining a foundational pillar of the Constitution