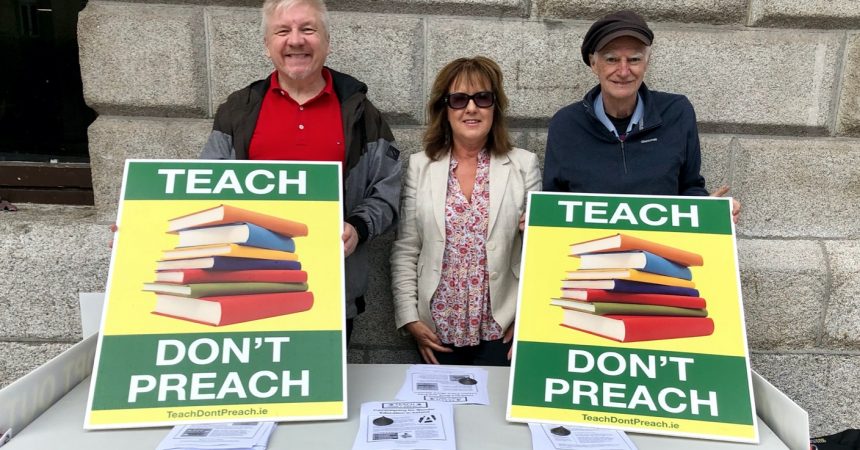 In the recent Burke case, the Court of Appeal stated that:

“179. The decision of the Supreme Court in the Campaign to Separate Church and State v. Minister for Education is binding authority..”

For years church and state have used the judgement in the Campaign case to force religion on to families in publicly funded schools against their wishes and conscientious objection. They have ignored the Constitutional rights of parents to under Article 41 and 42 of the Constitution.

The Supreme court found that it wasn’t unconstitutional for the State to pay for Chaplains in Community and Comprehensive schools, as Chaplains were helping parents with the religious formation of their children. This formation took place in the general atmosphere of the school (which the Court described as religious education).

These schools also had religious instruction classes where the opt-out under Article 44.2.4 applied.  The Supreme Court said that Article 44.2.4 must be looked at in light of Article 42 of the Constitution which gives parents absolute rights in relation to moral and religious education.

Chaplains cost the state approximately €10 million per year, and they are mostly Catholic. They are paid to help Catholic parents with the faith formation of their children, in Community and Comprehensive schools and designated Community Colleges.

The Supreme Court said it was constitutionally impermissible for a Chaplain to instruct a child in a religion other than it own without the knowledge and consent of the parents.

In 1998 Justice Barrington stated in the Campaign case that:

“The Community and the Comprehensive Schools are an attempt to make post-primary education available to all the children of Ireland irrespective of their means. They involve a vast increase in the number of children receiving post-primary education and a corresponding increase in the number of post-primary teachers most of whom as lay people. In community schools it is no longer practicable to combine religious and academic education in the way that a religious order might have done in the post. …”(Campaign to Separate Church and State v Minister for Education – Supreme court 1998, page 27)

The Supreme Court judgement didn’t stop Community and Comprehensive schools from combining religion with  academic subjects. Community schools have a shared patronage between an ETB and a religious body.  Comprehensive schools have a shared patronage between the Department of Education, religious trustees and various ETBs. Church and State used the Supreme Court judgement to tighten religious influence in these schools and just ignored key elements of the judgement.

Ethos in the General Atmosphere of the School

The Supreme Court in the Campaign case also said that:

“The Constitution therefore distinguishes between religious “education” and religious “instruction” – the former being the much wider term. A child who attends a school run by a religious denomination different from his own may have a constitutional right not to attend religious instruction at that school but the Constitution cannot protect him from being influenced, to some degree, by the religious “ethos” of the school. A religious denomination is not obliged to change the general atmosphere of its school merely to accommodate a child of a different religious persuasion who wishes to attend that school.” (page 26)

The Department of Education has no guidelines in place to give practical application to the judgement in the Campaign case that the religious ethos in the general atmosphere of the school can only influence children to “some degree”.  It seems that “some degree” can mean anything, and especially when state policy is to evangelise and promote values through religion.

The Supreme Court use of the phrase “to some degree” is a restraint on religious influence in Community and Comprehensive schools not a licence to indoctrinate. Church and State have used the Campaign judgement as support for integrating religion into academic subjects in ETB schools as well as denominational schools.

At one stage ETBS were paying Accord, a Catholic charity, to deliver relationship and sexuality education.  See more info on that here.

The Catholic practice of integrating religion into academic subjects is normalised in many ETB schools and also Comprehensive schools. Research commissioned by the ETBI, called “That’s how it works here’: The place of religion in publicly managed second-level schools in Ireland,” outlines how religion is not only part of the general atmosphere of the school but is combined with academic subjects.