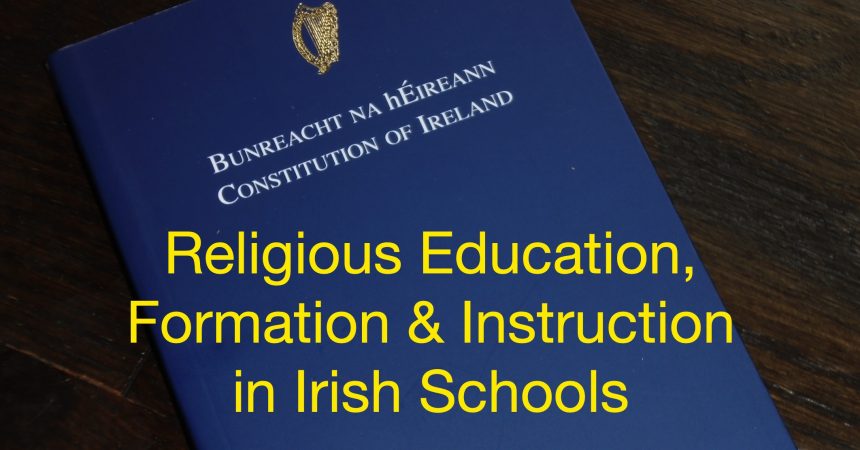 In the recent Burke case the Court of Appeal said that case law demonstrates that there are Constitutional rules around the education system in relation to parents, the state, and the child.

In this case the Minister for Education had argued that her only Constitutional duty was not to destroy these rights. The Court found against the Minister and said that there are rights, duties and powers under the Constitution, and it is only through understanding the interwoven nature of those relationships, that clarity could be brought to the complex constitutional provisions on education.

It is not constitutionally permissible to teach children morals through religion, if that is against the conscience of their parents. It is also religious discrimination. The courts have been very careful about this distinction, as they underlined the word Religious as opposed to Moral in their judgements.

The recent Burke case at the Court of Appeal case has linked Article 42 with Article 40 (equality before the law), Article 41 (rights of the family). The Court of Appeal also state that the judgement in the Supreme Court case, Campaign to Separate Church and State in 1998 was binding authority.

The State acknowledges that the primary and natural educator of the child is the Family and guarantees to respect the inalienable right and duty of parents to provide, according to their means, for the religious and moral, intellectual, physical and social education of their children.

The State shall provide for free primary education and shall endeavour to supplement and give reasonable aid to private and corporate educational initiative, and, when the public good requires it, provide other educational facilities or institutions with due regard, however, for the rights of parents, especially in the matter of religious and moral formation.

(Religious Education and Religious Formation are referred to within Article 42)

Religious Instruction – Article 44.2.4 – Is referred to under the right to freedom of conscience and religion. It states that:-

In the High court in the Campaign case in 1996 Justice Costello stated that:

“I have underlined the words “religious and moral formation” to draw attention to the fact that this Article recognises that parents have rights not only to provide for the religious education of their children (sub-paragraph (1) but also rights in the matter of their religious formation (sub-paragraph (4) and that it specifically enjoins the State when providing educational facilities to have regard to both these distinct rights. The difference between the ordinary meaning of these two concepts is not difficult to identify; broadly speaking, the religious education of a child is concerned with the teaching of religious doctrine, apologetics, religious history and comparative religions, whilst the religious formation of a child involves familiarising the child not just with religious doctrine but with religious practice (by attendance at religious services) and developing the child’s spiritual and religious life by prayer and bible reading and I think the Constitution should be construed so as to reflect this meaning. In the case of parents who profess the Catholic faith the religious formation of their children involves ensuring that their children attend Mass and that they pray and receive the sacraments on a regular basis……”(page 39, 40)

“Turning to the issue in this case, it is clear that one of the important reasons why chaplains as well as teachers of religion are appointed to the staff of Community Schools is for the purpose of assisting the religious formation of the children attending the school (assistance which, inter alia, is given by the celebration of Mass in the school). In effect, the State by paying the salaries of chaplains is having regard to the rights of parents vis-a-vis the religious formation of their children and enabling them to exercise their constitutionally recognised rights”.

Justice Keane in the Supreme Court 1998 – Campaign case said that:

“It must also be borne in mind that, at the time the Constitution was enacted, the vast majoirty of secondary schools in this country were under the control and management of religious denominations. The functions of those religious who were members of the staffs of such schools extended beyond the imparting of religious instruction: they were also manifestly concerned, as are the chaplains in the present case, with ensuring that the children under their care conformed to the practices of the particular religion to which they belonged, whether through attendance at mass or other religious services or in other respects.”

“It was not intended to render unlawful, at a stroke, the system of aid to denominational education, including where appropriate the payment of salaries of members of religious communities, whose duties might well extend beyond religious instruction in the narrow sense to what in Article 42.4 of the constitution was referred to as the “religious and moral formation” of children.”(page 15)

“…I would entirely agree with his conclusion that, in any event, they are constitutionally sanctioned, having regard to the recognition in Article 42.4 of the rights of parents in relation to the religious and moral formation of their children.” (pages 18,19)

Justice Barrington in the Campaign case at the Supreme Court in 1998 stated that:

“These references appear to me to establish two facts. First the Constitution does not contemplate that the payment of monies to a denominational school for educational purposes is an “endowment” of religion within the meaning of Article 44 S.2 s.s.2 of the Constitution. Secondly, the Constitution contemplated that if a school was in receipt of public funds any child, no matter what his religion, would be entitled to attend it. But such a child was to have the right not to attend any course of religious instruction at the school.” (page 24)

It is in this context that one must read Article 44 S.2s.s.4 which prescribes that:-….”

“The Constitution therefore distinguishes between religious “education” and religious “instruction” – the former being the much wider term. A child who attends a school run by a religious denomination different from his own may have a constitutional right not to attend religious instruction at that school but the Constitution cannot protect him from being influenced, to some degree, by the religious “ethos” of the school. A religious denomination is not obliged to change the general atmosphere of its school merely to accommodate a child of a different religious persuasion who wishes to attend that school.”(page 26)

“In Community schools it is no longer practicable to combine religious and academic education in the way that a religious order might have done in the past. Nevertheless parents have the same right to have religious education provided in the school which their children attend. They are not obliged to settle merely for religious “instruction”. The role of the Chaplain is to help to provide this extra dimension to the religious education of the children….”(page 27)

“It therefore appears to me that the present system whereby the salaries of Chaplains in Community schools are paid by the State is merely a manifestation, under modern conditions, of principles which are recognized and approved by Article 44 and 42 of the Constitution.”(page 27)

“Secondly while it is obviously right and proper that a Chaplain should counsel and advise any child who may consult him about its problems it would be constitutionally impermissible for a Chaplain to instruct a child in a religion other than its own without the knowledge and consent of its parents.”(page 28)