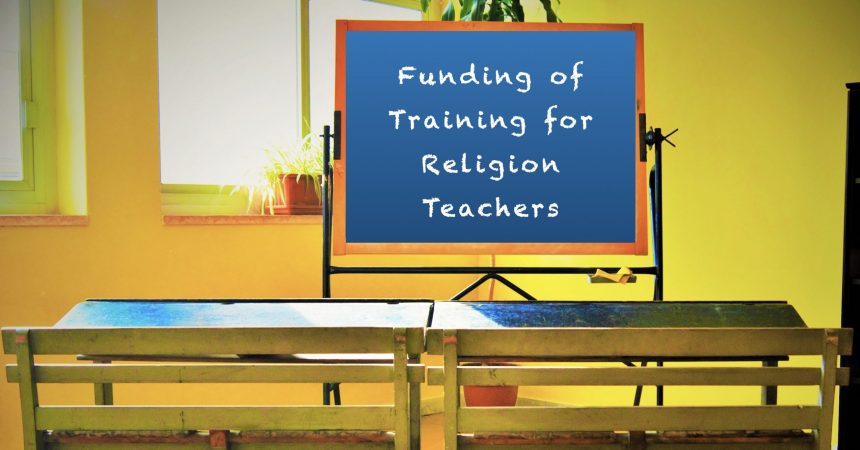 Atheist Ireland has written to the Minister for Education and the Comptroller and Auditor General about the misuse of public funds for in-service training of religion teachers in conjunction with Roman Catholic Diocesan Advisers. This is the letter that we have sent to the Minister.

We are seeking information on the amount of State funds used over the years for in-service between the Religious Education Support Service, the PDST and the Catholic Church. We believe that this is a misuse of public funds. It is also an endowment of religion forbidden by Article 44.2.2 of the Constitution and religious discrimination under Article 44.2.3. We are also making a formal complaint to the Comptroller and Auditor General in relation to the misuse of public funds.

The Information Commissioner has recently ruled in favour of Mr. John Hamill of the Freethought Prophet podcast and blog that the Department of Education was not justified in refusing access to certain records relating to the PDST on the grounds that they are not held by the Department or do not exist or cannot be found.

The PDST are jointly presenting at in-service for curriculum Religious Education teachers alongside Catholic Diocesan Advisers. The curriculum Religion Teachers who attend these in-service days are from schools under Catholic patronage as well as ETB schools and colleges including non designated Community Colleges. As far as we are aware the PDST do not present or attend any other in-service days with other religions or beliefs.

Curriculum Religious Education is a core subject in the vast majority of schools. Parents and students are coerced into the course on the basis that it is not religious instruction but religious education despite the fact that the Supreme Court has found that the rights of parents in relation to the Religious and moral education of their children under Article 42.1 must be read in conjunction with Article 44.2.4, the right to not attend religious instruction (Justice Barrington, Campaign case 1998).

Diocesan Advisers are employees of local Catholic dioceses whose concern is the catechetical programme in post primary schools. Their primary role is to ensure that the provisions for teaching religious instruction and formation are upheld, particularly in terms of content and in terms of timetabling allocations. Diocesan Advisers organise an annual in-service for the religious education teachers of a diocese.

This gathering introduces teachers to leading speakers in the catechetics of faith development. Diocesan Advisers also organise other less formal in-services which are arranged on a local (school cluster) basis. See “The Role of the Diocesan Advisor for Post-Primary Religious Education” published by the Irish Catholic Bishops Conference in 2004. See press release.

A recent article in the Sunday Times and Irish Examiner has focused on the fact that a curriculum Religious Education teacher was given an anti abortion video as a resource for curriculum RE during in-service between the Catholic Church and the PDST.

We are also providing a link to an article by Mr. John Hamill of the Freethought Prophet podcast and blog, who has been trying for years to get information on these particular in-service courses. This article refers to comments by Noel Farrell, an Assistant Principal Officer within the Department of Education and Skills (DoES) who has described the position of the PDST at these events as providing curriculum and pedagogical expertise. He stated that there were no documents in relation to reports or payments because these were not PDST events.

The PDST was established in 2010 and is funded by the Teacher Education Section of the Department of Education and is managed by Dublin West Education Centre. The attendance of the PDST at any in-service events organised by the Diocesan Advisers uses state resources because the staff are paid by the State and there are also transport cost involved. In addition curriculum RE teachers are paid by the state to attend in-service for Catholic faith formation and instruction.

The Department of Education are aware that PDST staff who are funded by the Department are providing curriculum and pedagogical expertise for curriculum Religious Education teachers at events organised by Catholic Diocesan Advisers for a Catholic catechetical programme in post primary schools whose primary role is to ensure that the provisions for teaching Catholic religious instruction and formation are upheld.

These events between the publicly funded PDST and the Catholic Church undermine the constitutional right of parents in relation to the religious and moral education of their children. It uses state funding to legitimise the integration of catholic faith formation (The Guidelines for the Faith Formation and Development of Catholic students) in curriculum Religious Education in a course that the Department claims is for all religions and none and where most schools and teachers inform parents that it is suitable for all religions and none.

Atheist Ireland’s recent Legal Opinion found that integrating faith formation into curriculum religion without the possibility of opting out was an attack on the rights of parents and the right to freedom of religion and belief. Your Department funds in-service for curriculum Religion teachers to integrate Catholic faith formation into the subject.

We look forward to hearing from you. 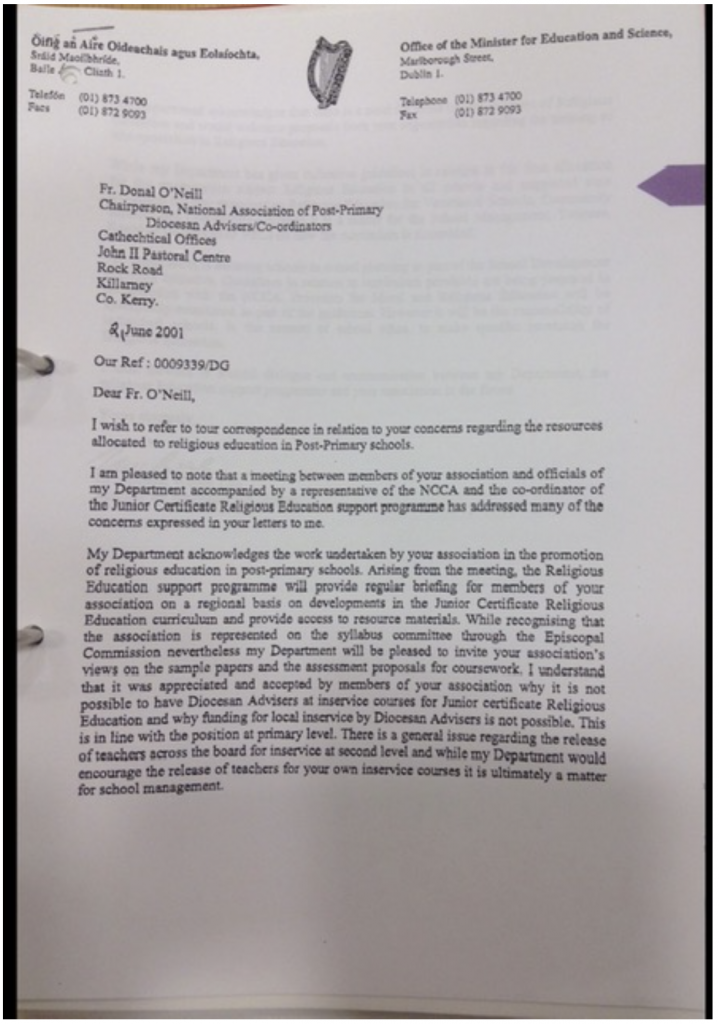 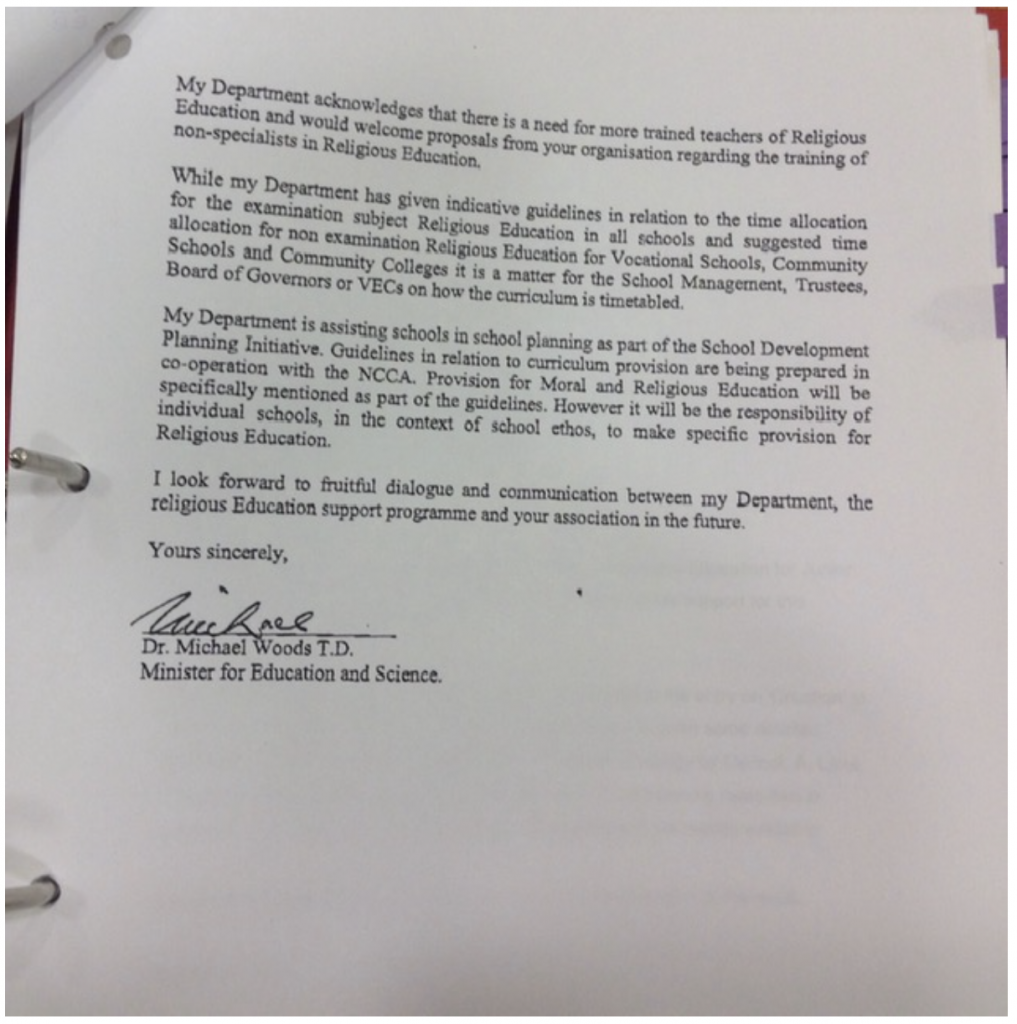 Another school year, and another €9.8 million for faith formation in ETBs

Schools should teach children to challenge, not to respect, harmful religious codes of conduct