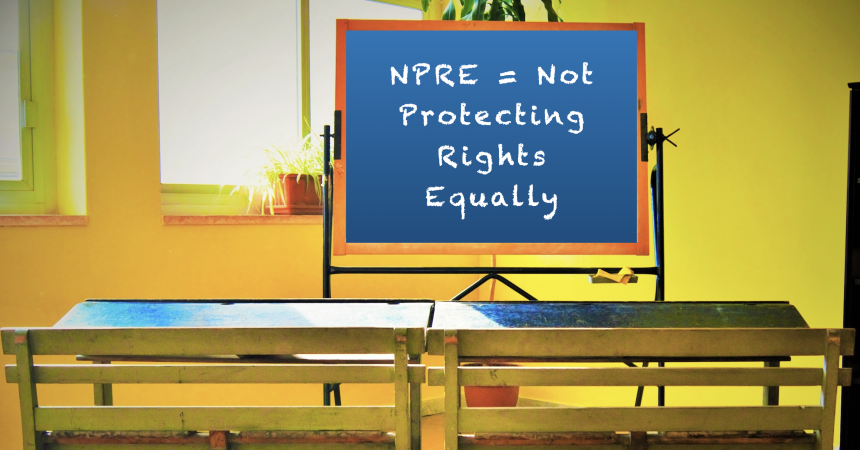 ‘NPRE’ stands for Non Participation in Religious Education. It could more accurately be described as ‘Not Protecting Rights Equally’.

This Loreto policy breaches the Constitution and the Education Act. It also breaches GDPR law, as the school draws up a list of these ‘NPRE’ students and puts their names on a database along with the reasons why they are not participating in religious education.

This Loreto policy is absolutely disrespectful to minorities and undermines pluralism and the right to freedom of religious and belief. It reflects Catholic power and control over our education system.

We are aware that publicly funded Catholic schools are not inclusive, and that they discriminate on religious grounds. However, this policy is worse than that. It attempts to actively control how atheist and other minority belief parents bring up their children in accordance with their own personal philosophical beliefs.

Section 30-2(e) of the Education Act 1998 reflects this right. This right is the responsibility of the Minister for Education. There is no dispute in relation to the right to ‘not attend’. The Constitution is clear and so is the Education Act.

The Supreme Court in the recent Burke case has upheld parental rights and said that parental authority over the education of their children was a foundational pillar of the constitution. Not in Loreto for the NPRE parents and students though. They obviously missed that Supreme Court case.

The Education (Admission to Schools) Act 2018 obliges schools to put in their Admissions policy the arrangement for students not attending religious instruction.

The vast majority of schools just ignore that legal requirement and the Minister for Education, Norma Foley has done nothing about this. Schools simply put in their Admission policies that parents should come into a meeting to discuss the issue.

In the case of the Loreto in Balbriggan, this is what their Admission Policy says:-

As an aside, by putting ‘Non Participation in Religious Education’ as their response to the law about ‘Religious Instruction’, they are acknowledging that ‘religious education’ and ‘religious instruction’ are the same thing. This is significant as some schools and patron bodies deny this fact.

The Loreto school policy then says that students who do not participate will be supervised in the religion class, and if that is not satisfactory then parents are responsible for the supervision of their child. So they just ignore the Constitution and the Education Act 1998 with regard to the right to not attend religious instruction.

The Loreto policy goes on to state the following:

Once the student has secured a place in the school and expresses a wish to opt out of R.E. the procedure is as follows:

Under the Constitution and the Education Act 1998, parents do not need to give reasons for exercising a Constitutional right. The Supreme Court has said that the inalienable rights of parents in relation to the education of their children must be read in the context of Article 44.2.4, the right to not attend religious instruction.

This Loreto policy also breaches GDPR because the school keeps lists on a data base of sensitive issues when they had no right to that information in the first place.

Loreto are not finished yet with the ‘NPRE’ parents and students. If parents manage to get as far as ‘not participating’ and agreeing to their child being supervised in the Religious Education class, the school then controls what the student does during this time.

No homework is allowed, and a list of suggested tasks and activities is recommended by the school. Any texts for studying must be agreed with the school and the religion teacher.

There is a suggestion in the policy that even though the school recognises the right of parents to not participate in R.E, the responsibility for the spiritual and moral development must be met!

How will the school decide if the parents are meeting their responsibility for the spiritual and moral development of their child? Will an interogation take place?

According to the Supreme Court (Burke case) the authority of the family is a foundational pillar of the Constitution. Schools do not get to decide what is or is not suitable religious and moral education and formation for children.

And what is meant by the word ‘spiritual’? What must they think of atheist families?

The Loreto policy goes on to state about its Information Pack:

Parents of NPRE students are informed of the standing of Religious Education in Loreto, Balbriggan as a subject for “all religious faiths and none”. The information pack is sent home to ensure clear communication regarding what is expected of the NPRE student. The pack includes the following:

Letter outlining the place and function of the R.E. course in the context of our aim to provide a holistic education of every student in Loreto Balbriggan.

An outline of what the NPRE student is expected to do during R.E. class.

No homework is permitted and a list of suggested tasks and activities is recommended.

As part of our NPRE programme students who opt out of participation in the RE class can study agreed texts either provided by the school or home.

A list of relevant, agreed, books and papers or documents which are made available by the school for the NPRE student during the R.E. class. Parents, Guardians and students are free to suggest and submit additional texts or learning materials in consultation with the Religion teacher and school management. The texts should be appropriate and in line with the spirit of the NPRE policy.

A request that the parents specify which books they are happy for their daughter to study.

A form to confirm that the student will be opting in/out.

Notification of the fact that RSE may be taught during senior R.E. class as part of the SPHE programme and that there would be an expectation that the student attends these classes.

In addition to all of the above, ‘NPRE’ parents and students get no Relationship and Sexuality Education because it is delivered in the Religious Education class and they do not participate.

This total disregard for the constitutional rights of parents is the fault of the Department of Education and their failure to put in place an Administrative Scheme in relation to the right to not attend religious instruction.

We are aware that publicly funded Catholic schools are not inclusive, and that they discriminate on religious grounds. However, this policy for ‘NPRE’ parents and students in Loreto, Balbriggan is worse than that. It attempts to actively control how atheist and other minority belief parents bring up their children in accordance with their own personal philosophical beliefs.